Get to Know a Chef: Garth Legree, The County General

Chef Garth Legree has been at The County General since it first opened around 8 months ago, and was elbow-deep in the creation of the restaurant, from renovations to the menu. When the call came down from on high that Splendido owners Carlo Catallo and Victor Barry would be branching out, Garth made the transition from the high-end, upper-crust service of Splendido to the more casual--but no less tantalizing dishes--of The County General with great aplomb.

I was excited to speak to the man himself, having licked my lips many a time before his dishes--from the fish tacos for two, to the chicken sandwich--and admittedly despaired a bit at the small-ish portion sizes (you can never have too much of a good thing). It turns out that Garth is from a miniscule Ontario town called Courtice, and while we chatted at one of the small West Queen West restaurant's few wood tables, I found myself developing an even deeper appreciation for the details that never fail to elevate the restaurant's country-esque comfort food offerings. 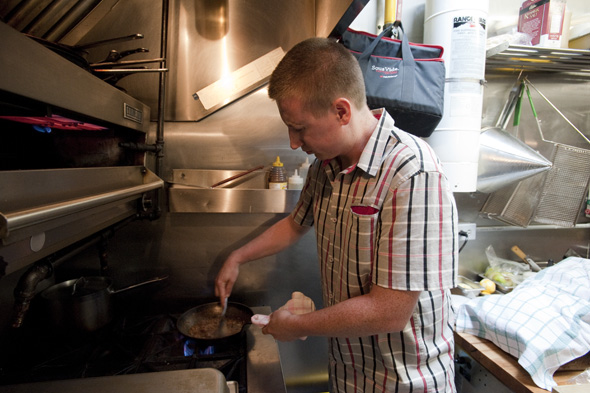 No. As a little kid, I didn't want to be a chef--I wanted to be a fighter pilot, or something crazy like that. I'd always worked in restaurants since I was a teenager, starting with dishwashing and prepping at Mom and Pop places where I grew up. But when I found out I could cook for a living, I thought "why not?" Entertaining, in general. I always liked to host, and I thought, "how can I do this for a living?" 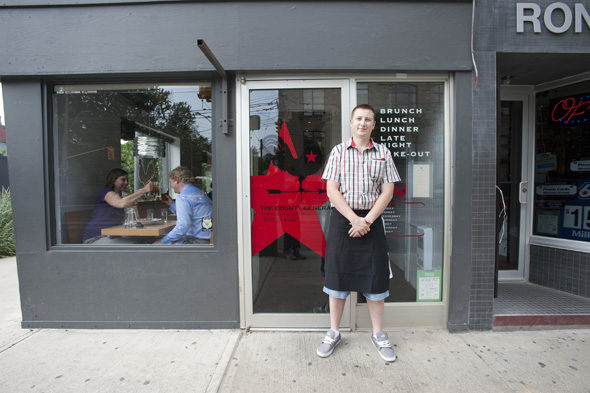 I sort of learned on my own. I went to George Brown, but didn't take Culinary--I studied Food and Beverage Management to learn more about how the business actually works. Otherwise, I'm self-taught--I picked up things from my Mom and Dad. Their simple meals are still my favourites. 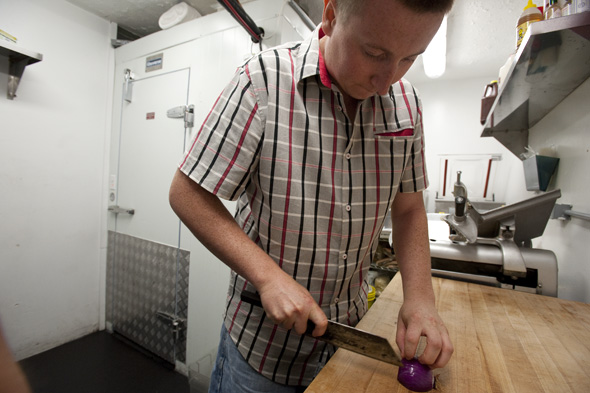 I really enjoy pasta, from beginning to end. I was lucky to work with Maurizio Verga, who's at F'Amelia now--he taught me how to make it from scratch. On The County General's menu, I've always liked cooking meats, and was at Splendido's grill station for a long time, so I guess the steak frites. It's a simple dish. 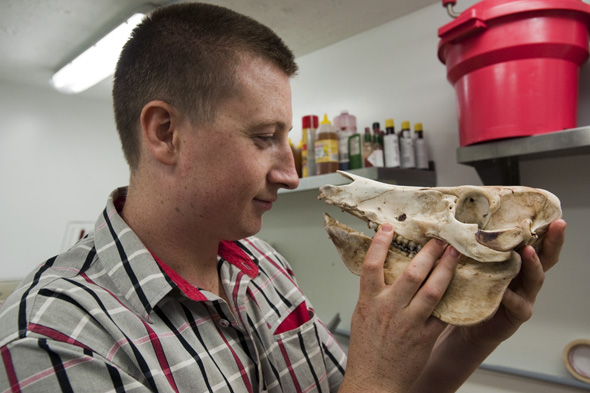 We almost cheat, as a lot of people don't have this at home, but we sous vide our chicken--that's the secret, that'll be what keeps all the juices inside, and that's what makes it so tasty--and then it's got to be crispy on the outside. It's good to eat simple things that people grew up with, or that their parents cooked at home--obviously we execute it at a higher level, but we're all about simplicity. 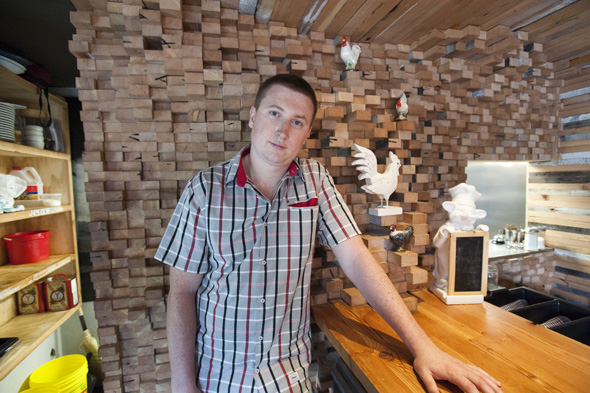 How do you make your fries taste so good?

The key to that is we blanch our fries first in water, then fried at a low temperature, then they're fried at a high temperature in our County spice blend, which is just a mix of various dried spices and chilis. 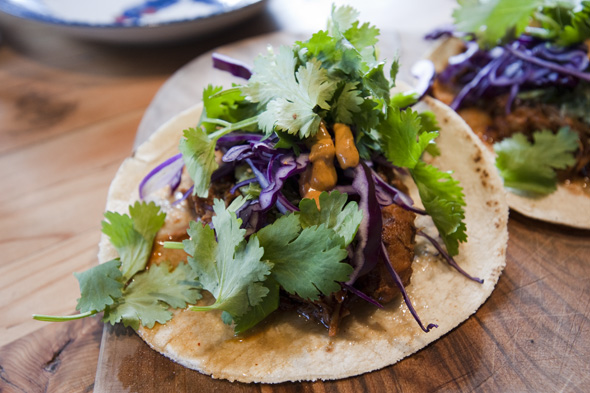 Where do you source your ingredients from?

We try to keep it as local as possible. Our proteins come from Cumbrae Farms, as we've had a long relationship with them dating back to Splendido. We use Vicki's Vegetables in Prince Edward County (especially good for tomatoes) and Ottawa Valley Cheddar--a lot of smaller suppliers. 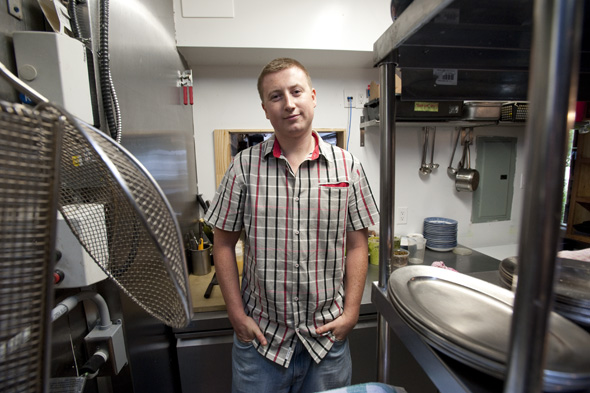 What's the worst experience you've had working in a kitchen?

There's nothing worse than a bad service where everything goes wrong--front of house clashing with the back, orders taking too long--especially in the higher-end restaurants. Sometimes you just want to put your head down and get out of there. But I haven't really had any, coming to work every day, bad things are going to happen.

When I was about 15 years old, I was a dishwasher in a Greek restaurant, and I got a blade right below my thumb. It's a weird area. An Albanian gentleman grabbed my hand and just packed it full of salt, wrapped it up, and told me to get back to work--"Take it like a man." It hurt like hell, but it didn't get infected.

Would you ever do a food truck?

Definitely. It's fun, and you have your own little space, and the ability to move around. In a restaurant, you have to work as a team, but I like working independently, too. For the kind of food we're doing at County General, we'd fall into a food truck quite well. 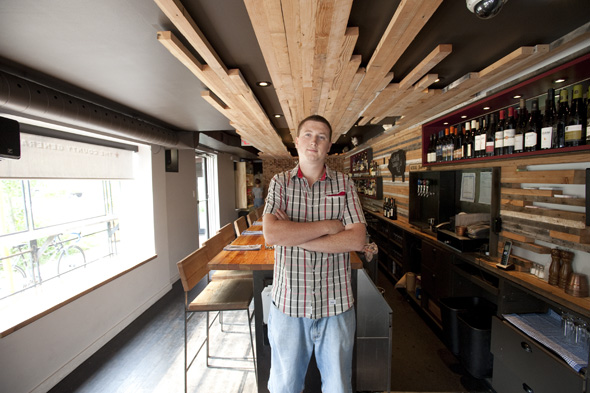 When I'm not here, which takes up most of my time, I like to do the same things I did as a kid--ride my bike, skateboard, snowboard, do sports. In the summertime, I like to walk around, go to the park, enjoy the weather. Just relax and take it easy. I want to say I read books and such, but it's not really the case. I try to go home as much as I can--my family still asks if I can come home for Friday and Saturday nights, even though it hasn't been like that for 6 or 7 years.

Best culinary tool? Kunz spoon. It's always in my back pocket.

What would people be surprised to find in your fridge? It's empty. I have a Brita filter.

What's one food you can live without? Vegetables. I just love produce.

What's one food trend that needs to end? Purees.