Get to know a bartender: Sandy De Almeida of the Gladstone

Sandy De Almeida is a busy woman. In addition to holding things down Friday and Saturday nights at the Gladstone Hotel, she also moonlights behind the bar at Churchill, Unit and Reposado. And while she's more than capable of pumping out vodka sodas at breakneck speeds for the weekend warriors of West Queen West, she's at her best when she's crafting cocktails and shooting the shit with whomever might be hunched over her bar that night.

I met up with Sandy on her day off to talk about movies, public nudity and New York City. 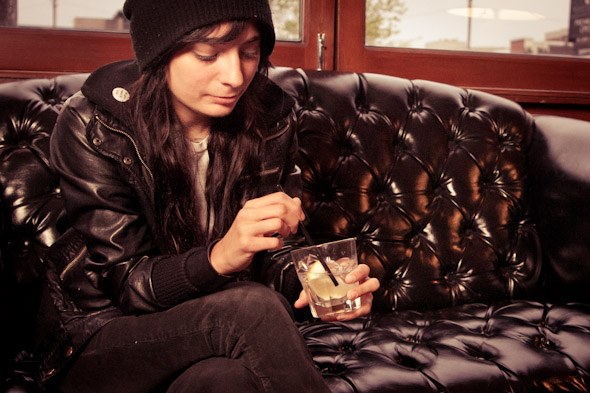 What was your first job in the industry?

My first job was at Urban Thai, but I've been here [the Gladstone] for 12 years. This was pretty much my second job, although I've worked at other places in the interim such as Wrongbar, Unit, Reposado, and Churchill.

And you're still at all these places?

I'm not at Wrongbar anymore, but I still bartend on Thursdays at Unit. I've started to get a cocktail program going there so I just do the one day. At Reposado I do a guest spot once a month — the first Tuesday of the month. I've been at Churchill since they started, but lately I've cut down to one day a week as well because I've been doing other things. So yeah, Sundays at Churchill, Thursdays at Unit and the first Tuesday of the month at Reposado — and then of course, here at the Gladstone on Friday and Saturday.

How did you get into cocktails?

I have a lawyer friend who lives in New York, so she's always entertaining clients in these cool little bars. Five years ago I went down there — and at the time I wasn't even really a cocktail person — but she kept trying to sell me on them. She finally convinced me by saying "just let me take you to one; it will change your life." And it totally did. 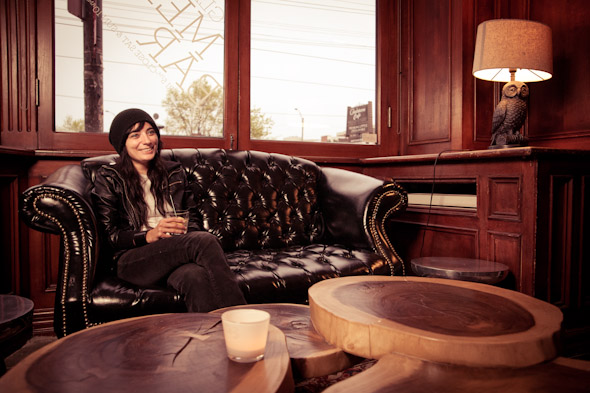 What was the bar?

The bar was called Death and Company, and I typically visit about five times a year now, although this year I didn't. I switched it for a tan in Mexico.

I now have other favourites, although Death and Company is still my number one. These bars are basically similar to what we would consider speakeasies, so there's no signage and you need to know someone who knows where it is — that kind of thing.

But those aspects aren't what that drew me to it — which is why I wasn't really into it at first — but the bars themselves are stunning and I just fell in love with the drinks, which is funny because I was never really into heavy-spirited cocktails, and now that's what I do. 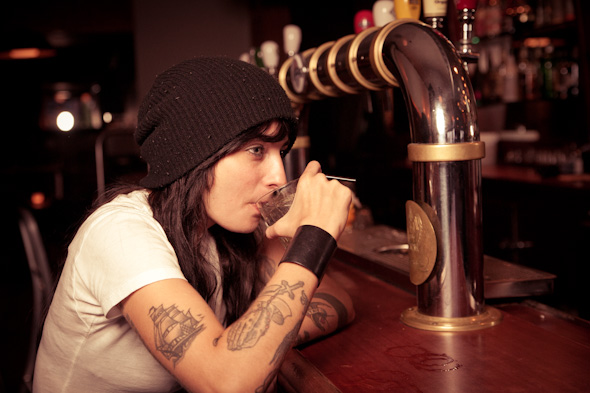 What brought you into the industry initially?

I was 20. It wasn't a matter of something getting me into it...it was just the job that I had.

To tell you the truth, I think it was a girlfriend I had at the time who was a server at The Rex, which used to book jazz shows here in the Art Bar and they'd provide their own staff. The guys who hung out here at the time just hated everyone, but they really liked her and eventually she started working here for real.

What do you do with your days off?

Play around at home, make drinks, and watch movies — not much, because I don't have many days off. That's so sad! It's a sad answer, but it's the truth.

Senna. It's a documentary about Ayrton Senna, who was a Brazillian motor-racer. It's just unbelievable. Also Shame, Steve McQueen's new movie; I know a lot of people who found it to be too slow, but I loved it. 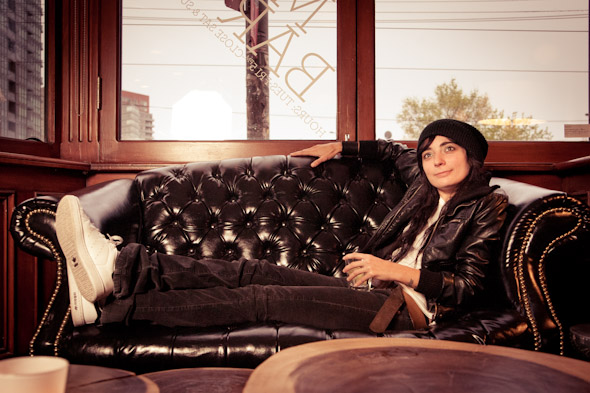 Definitely meeting people, because I love people. But then the worst thing is also people: the shitty ones, at least. Aside from that, there are so many good things, like learning about spirits, which I wouldn't have a platform for without bartending. I also feel like it keeps you young. When I see people that I went to school with who are my age, they seem a lot older. 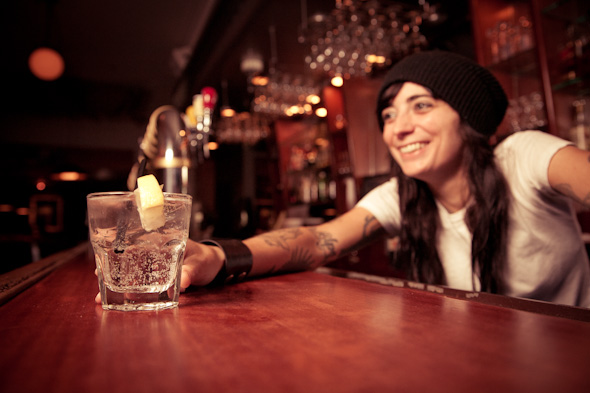 What do you drink when you're on the other side?

I find if you use terms of endearment, you can disarm someone pretty easily. At least that's true when it's coming from me. It would probably be different coming from a big, burly dude. But because there's not really anything all that threatening about me I feel like if I call them "sweetheart," I can generally talk them down — they just want to be loved. 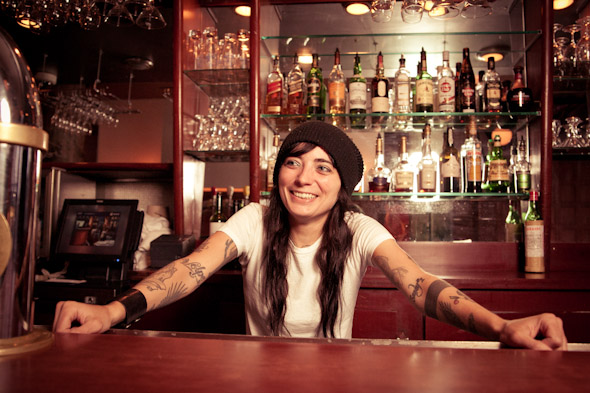 Have you had any experiences where maybe that wasn't enough?

I had a guy pull his cock out. It was a Thursday, and at the time the ballroom wasn't open so it was just the Melody Bar for karaoke. There was a 68-year-old bartender and I was serving on the floor, but I had to tell this guy that he was cut off. I guess the guy had it in his head that we were kicking him out, even though I was just telling him he couldn't drink. So he yelled a bunch then eventually got up, literally pulled his cock out, said "suck my balls" and then left. I was just stunned. The worst part: it was a really big cock and he really had to pull it out. I was young, too, maybe only 21. It's so aggressive that some big guy does that to some young, 5' 1" girl.

The story gets even better from there. I got home and my girlfriend at the time, who I lived with, also worked at the Melody Bar. She'd been at the bar that night, and when I described the guy to her, it turns out that he had tried to pick her up, so she had his phone number. We were crank calling him for weeks.

Straight Up or On the Rocks? Straight up

Sweet or Dry? Dry, but I've got some good sweet ones

Lemon or Lime? So, so lemon

Labatt or Molson? I'm going to go with Molson, because I think we might have a deal with them or something

Get to know more bartenders via our Toronto Bartenders Pinterest board.