Get to know a Barista: Liam Bradford at Crema Coffee

If there were any half dozen points at which the Junction began to change from a sleepy retail dead zone into an up and coming neighbourhood it would probably have to include the opening of Crema, which has not only helped revive street life on this stretch of Dundas West but survived the opening of a Starbuck's right across the road. Its youthful staff has probably been part of its key to success, which has spread into a mini-chain of cafes across the city, staffed by baristas like Liam, interviewed during a lull on a rainy Tuesday morning.

I enjoy the customers that like to joke around, that don't take things too seriously. There are a few that come in here where it doesn't matter if they're on their way to work or whatever - they usually take the time to joke around a bit. 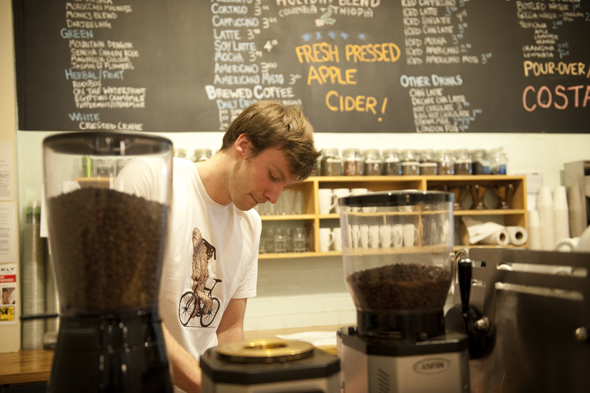 It's hard to say - there are so many variables involved on pulling a nice espresso shot. A lot of it has to do with really being in touch with the machine, I know it sounds a little bit cheesy, but having a good feel for how the espresso's pulling that day and being able to adjust on the fly and make sure it's right.

No comment on the last one. No, actually, I don't. Quite a few of my colleagues do, but I'm a political science graduate, actually.

I was the head of the A/V crew in high school doing the lights and stuff for assemblies. Pretty geeky club to be a part of, but I mostly just did it so my friends and I could hang out in the lighting booth and play video games. When I tell people that today they seem surprised. I guess you could say I really embraced my nerdy side back then. 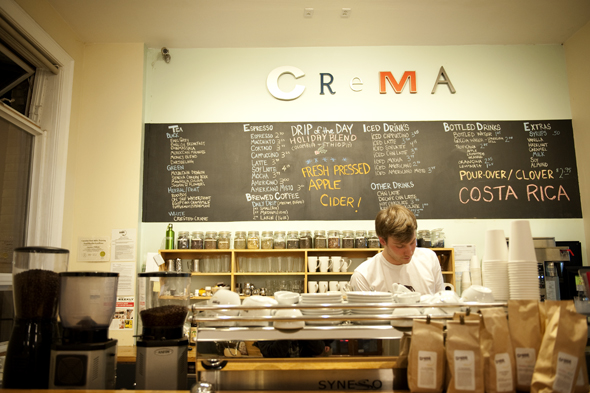 The third floor of the Toronto Reference Library. At the back, though - not at the main tables.

Hands down, Music from Big Pink by The Band.

A lot of places i know, all you have to say is 'An Americano,' and they only do one size. Here at Cream we do two sizes, so big Americano or small Americano - that's it. No judgment.

I just take a drip coffee with a splash of cream. No sugar. 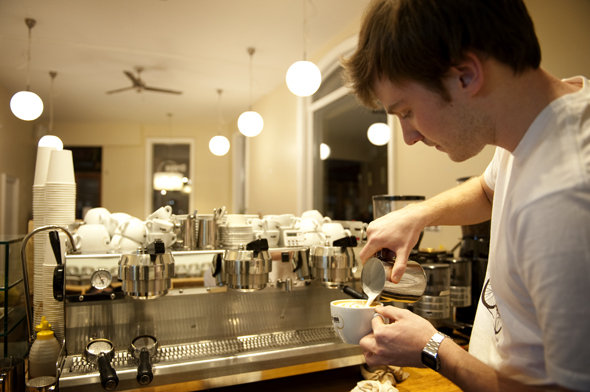 Dogs or cats? Dogs, for sure.