Toronto through the eyes of Councillor Mary-Margaret McMahon

In one of the most watched local races of last year's election, Mary-Margaret McMahon defeated Ward 32 councillor Sandra Bussin in October 2010. The race attracted attention over Bussin's role in the now infamous Tuggs deal, which was used by Rob Ford as an example of the city's wasteful spending.

While some attribute McMahon's victory to local resentment over the Tuggs deal, she insists her own merits won her the race above all else--though she was helped by several Ward 32 candidates who dropped out of the campaign to build a unified front against Bussin.

McMahon is 44 with two children and is the daughter of Ron Emo, the former mayor of Collingwood. She made a name for herself as a community and environmental activist, founding the East Lynn Farmers Market on Danforth and organizing various neighborhood events.

McMahon has described herself as "fiscally responsible" and a "conservative environmentalist." She talks enthusiastically about the potential of local, low-cost, initiatives to change and improve communities, and frequently speaks about benefits of changing underutilized schools into community hubs.

Recently, McMahon has been fighting the TTC over its proposal to build a new storage facility at Ashbridge's Bay to house the city's new fleet of LRVs arriving in 2013. She says the additional streetcar traffic in her Ward would mean unnecessary congestion. Unfortunately for McMahon, and those opposed to the project, the TTC approved the facility unanimously.

In the fifth installment of our interviews with Toronto's new city councillors, I sat down for a chat with McMahon at her office last week. Here's what we talked about:

You've been in City Hall for over two months. What's an average day like for you?

It's 12 to 14 hour days. Sometimes I try to go to Yoga in the morning and I come in around 8:30 to 9:00am, but some days I come in around 7:00am and we try to get my emails done before my 9:00am meetings. Then it's usually meetings all day, every hour on the hour. I'm also in the Ward for meetings to find out what's most important.

Do you find you have less private time than normal?

I was always out and about volunteering and the campaign was good practice. My 13-year-old son got braces the other day and I didn't see him for 24hrs, so I had to lift up his lip while he was sleeping to take a look at his braces and I thought: "Wow, that's a little crazy." So we're trying to balance and make time. Recently I took a day off and went skiing up in Collingwood with my kids. You have to be strict about making family time. 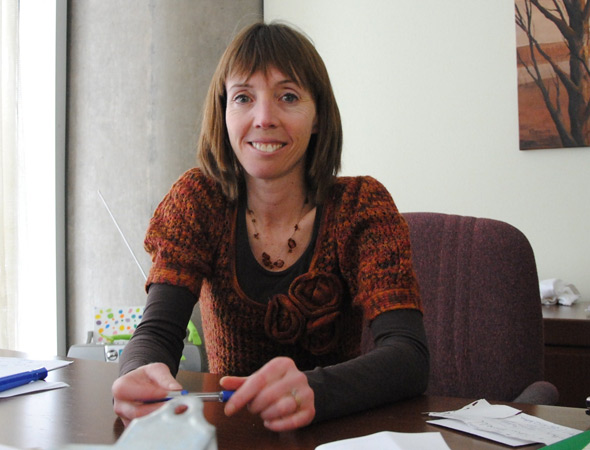 What are your impressions of Rob Ford's job as mayor so far?

He's being very responsible and respectful in the meetings. I don't see him often, I think he's out of City Hall a lot...He's getting his election issues passed, but for other promises, he realizes he needs to soften them, such as the plastic bag fee...

[As to the expedited budget process], I don't know any different. There was a community engagement and it was a pretty tight schedule...There's a lot to absorb for us, but I'm for efficiency so I'm for a happy medium between [the way the budget] was and what it is now. Hopefully next year we'll have a bit longer [to deal with the budget].

What are the disadvantages to being a new councillor?

Well, you don't know exactly how to get your motions passed or what the next avenue is if they don't pass. Like for example, with the TTC storage yard, I took it to the TTC commission but someone said after: "You could have taken it to council." There're lots of things like that--just knowing the best strategic path.

How strong are the left-right divisions in City Council?

I'm surprised with the baggage, I'll say that. Like for example, the first council meeting took us five hours to debate three small items. But I'm very optimistic that going forward we'll be able to work together. I'm very excited by the newbies. There're fourteen of us, we're very eager, keen, and energetic, and we don't have baggage. Most of us are loyal to good ideas whether they're with Mayor Ford or Councillor Fletcher.

You sit on the Gerrard India Bazaar BIA. The neighbourhood is run-down and in need of improvements. Why did Little India get that way and what's keeping it from being more successful?

I've yet to have a BIA meeting. We haven't got a meeting schedule yet. I don't know what happened. But going forward I'm there to help. I've had residents write-in and want to volunteer their services and form a revitalization group.

Do you have any specific ideas about what might improve the neighbourhood?

Well, for example, I live up by Woodbine and Danforth and it was called no-man's-land, and we just formed a resident's association. Three other women and I started a farmer's market which has brought in eight viable businesses. We just transformed that neighbourhood ourselves with no BIA support and basically no money. I'm a big believer in power to the people.

In this case you have a BIA, so you need a community group. We might want to get a heritage designation on the theatre there and revitalize it, and possibly create a community hub in the one of the schools there.

I don't like this battle between LRVs and subways, I think we need both where it makes sense. I hope whenever Ford rolls out a [detailed transit] plan it can include both. I think the Eglinton LRT will go ahead and it looks like on Sheppard there will be a subway. We've had groups of people from Sheppard come and plead with us that they want a subway, saying: "Who are you in the downtown Toronto to dictate what's best?" And they do have a point except when finances come into play and timelines. 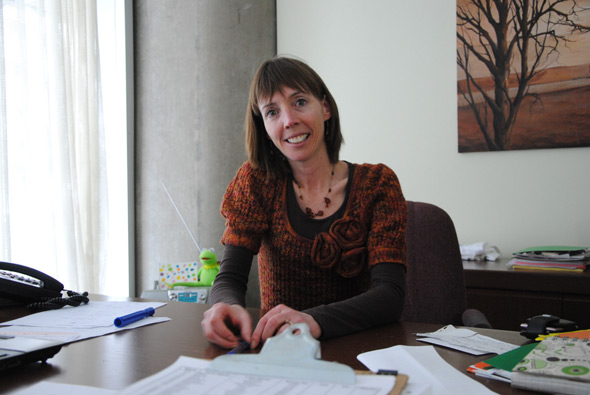 Do you support a subway extension along Sheppard to the Scarborough Town Centre?

I have to look at it, all the numbers and that. That might be a possibility. The plan hasn't been unrolled yet. So it's hard to speculate...

What about the rest of Transit City how much of it do you think will survive the next four years?

There're lots of things I like about Transit City, I don't think it's the perfect plan, but what is? We'll have to wait and see...

As a member of the Parks and Environment Committee what sort of ideas would you like to introduce?

Now you're talking. I'd like to make sure parks are accessible to all, which would mean working with the permitting section of parks, to make sure it's not a colossal endeavour for someone to utilize the park for a festival or something, so we need to reconfigure the permit process.

I'd love to pilot some physically separated bike lanes and I'd love to get a BIXI bike stand out in the beech. I know the area is just downtown Toronto right now, but I'd love to squeeze one stand into the Beach at least.

I'd love to push through some community solar groups. There's a church in my ward that's the first ever church to put up solar panels and they built them all with debentures, people as far away as Windsor bought a debenture. They had to sell a hundred $1000 debentures, and they didn't think they could do it and they did.

You voted to repeal the Vehicle Registration Tax. How should the city make up for the lost revenues?

[I would have preferred to keep the VRT] if we could allocate it specifically to transit, but it wasn't the case, there weren't too many keen on that. I'd like to study and create an energy efficiency plan for City Hall. The lights are on all the time, on weekends and at night. IT has told us not to turn off our computers at night because of the surge in the morning, which I think is 1970s thinking. And I know the TDSB is saving a million dollars a year by turning off their 56,000 computers on weekends...There's a lot of money to be saved for energy efficiency.

What's your position on the Land Transfer Tax?

I did campaign that I'd vote to repeal it but I think we have to maybe delay that a bit so we can sort out our finances because we're entering tough times.

Should the city contract out garbage collection?

Good question. That's something we need to research. Etobicoke apparently saved a million dollars the first year, but elsewhere [it didn't work]. I think the Ottawa model works, where they have a combination of private-public. I certainly don't think one business should have the monopoly on it. I think the unions should be given a chance to bid. Making things competitive is a good thing.

What are Toronto's best qualities?

I could go on for hours. I'm a small town girl and I feel like I live in a small town in Ward 32. I love the diversity. You can get anything you want. If you want to stay in your little pocket, your small town, you've got your mom-in-pop shops and people know you by name. If you want to go see a show or an art gallery you hop on a subway and you're there...We have a great tree canopy, parks and skating rinks, we have plenty outdoor cold compressor rinks--we have fifty one, I think, and New York has five.

The worst quality is the traffic and congestion. It's insane. When we go up to Collingwood it takes us an hour to get to the outskirts of the city and we leave Friday at lunch. To me, rush hour is every hour. People are married to their cars and transit is antiquated.