Toronto through the eyes of Councillor James Pasternak

In October 2010, James Pasternak was elected to replace long-time councillor Mike Feldman in Ward 10. Pasternak joins city council after working as a trustee for the Toronto District School Board (TDSB) since 2006.

As a trustee, Pasternak promoted programs for parents of children with disabilities, and advocated for more after-school programs and musical instruments for schools in priority neighborhoods. Pasternak also served with former mayor David Crombie on the Toronto Lands Corporation.

Pasternak was born and raised in Toronto and has lived with his family in Ward 10 for 22 years. He is a fourth-generation Torontonian--his great-grandfather came to the city in the 1890s. In his spare time, Pasternak likes to bike to the lake shore, play hockey at Chesswood Arena, and go camping throughout Ontario.

In the third installment of our interviews with Toronto's new city councillors, I sat down for a chat with Pasternak at his office earlier this week. Here's what we talked about:

You've been on council for two months now. What's an average day like for you?

The days start quite early in the morning and they can go until quite late at night. The great majority of our time is spent handling inquiries from constituents--we get dozens of calls every day. We're also racing around from meeting to meeting, whether it's for council, committee, or a constituent matter.

It's just like snowflakes; no two days are alike.

What did you make of Don Cherry's introduction to Rob Ford? And is council as polarized as Don Cherry made it sound?

At times the 14 new councillors feel they've walked into some sort of simmering family feud. My sense from the new councillors is that they would like to be left out of that. Obviously there's some old baggage from long-ago and we don't want to enter the fray.

And Mr. Cherry? [Laughs] I thought it would have been safer if he'd been told not to make any remarks. What he said was out of place and unfortunate. 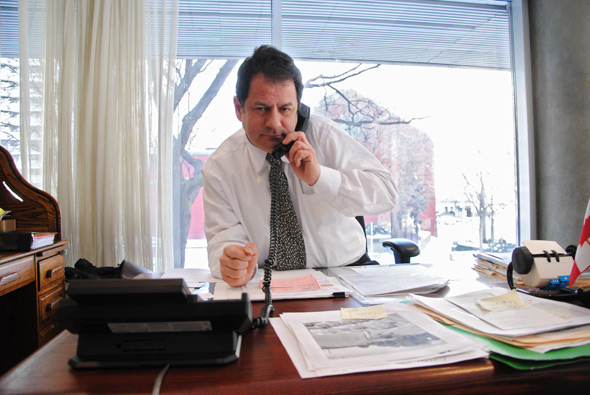 Are you happy with the way Rob Ford has been handling the 2011 budget? And what do you think about the budget's expedited timeline?

As far as the budget is concerned, we have a contingency fund and a surplus to work with so we can come close balancing [the budget]. [But this year's approach] as a long-term strategy for fiscal responsibility and sustainability, I think, has its limits. We have to look at efficiencies, some cost reductions, but also we need to improve things on the revenue stream, we can't go zero per cent [tax] increase forever.

[As to the timeline], it's fine. There have been all kinds of hearings with the budget committee, staff has been available for direct questions and briefing notes...there were community consultations across the city...and we heard from many different groups. Public and councillor input are crucial and we've covered those pieces.

Can you describe your relationship with Rob Ford?

Do you see any disadvantages to being a new councillor?

Well, working on the school board was a big advantage. That's a $2.6 billion budget. While it represents about a quarter of [the city's budget], I understand what you have to look for in large budget documents.

It's beyond the scope of any single councillor to go line-by-line on a $10 billion budget, but you have to know what to look for, what affects your community, your ward, areas where funding gets increased, spot areas where there's a potential decrease, and asking good questions to city staff, that's how you approach the budgetary process.

What about understanding the bureaucracy? Is that hard for a new councillor?

I tried to tackle that right away by keeping three of the four staff working for former Councillor Feldman. They stayed with me, they had the linguistic requirements--because we have a very diversified ward--they knew all of the city contacts and decision makers, so we were able to start right away and get to the right people to solve problems and to take initiatives to move forward.

You support an extension of the Sheppard Subway westward to Downsview. How much would this cost and why do you think it's so important?

It's the most vital transportation link in the city, in my view. It's the only connection between the two subway lines north of Bloor. It would create a cost effective loop between the north-west (York University), and into Sheppard East and eventually down to the Scarborough Town Centre. It would allow people on the Yonge line to move seamlessly across the city and up to the west and the other way around.

Why do you oppose the Finch LRT as it's proposed under Transit City? And what should be done to address the growing traffic concerns in the area instead?

[Adding the LRT] across Finch, without widening [the street] with two more lanes, wouldn't be feasible as an east-west transportation route. [However], if you add the lanes you'll eat up parkland along Finch west of Bathurst, and if you add the two lanes west of Dufferin you'd be eating up retail and parking space.

I consider the [Finch LRT] plan very problematic...As you know, we're already building [a subway] up to York University, which is scheduled to open by 2015. That should take a lot of the north-south traffic pressures off Dufferin and Allen roads, and subsequently Finch. At the same time, if we can build the subway from Downsview to the Yonge Line, you'll take enormous pressures off Finch east and west. And you'll be able to free up the bus routes and create a better flow of traffic there.

I should add: our surface routes are not serviced the way they should be. We clearly need more buses and we have to increase the frequency. 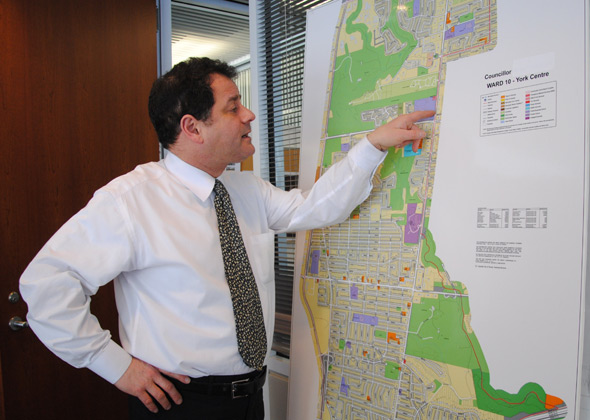 You support the province declaring transit an essential service. Do you worry this might cost the city more since arbiters tend to side with unions?

The reality is that strikes are rare and short. However, at the same time, the uncertainty in the weeks leading up to a strike usually creates a fall in ridership. During a strike the estimate is the city loses about $50 million a day in economic activity. When service resumes, usually when workers are legislated back to work, ridership doesn't recover easily. Many people have found alternative ways of getting to work, not only during the strike period but in the weeks leading up to it.

So the financial consequences of strikes are far more damaging than any kind of potential wage increase.

You supported the removal of the Vehicle Registration Tax and you have said you support the repeal of the Land Transfer Tax. How will the city manage to make up for the lost revenues?

In the current economic climate the city cannot afford to fully eliminate the Land Transfer Tax. However, we should address it again in 2012.

It was a very intense race in Ward 10. There were twelve candidates, five of them were very competitive, and the race was very tight. The 19 per cent is a little deceptive because it's all the people who went out to vote, not the people who might have voted.

I think it's important not to have it both ways. If I had won with 75 per cent of the vote people would say "the system is flawed," or "those landslides aren't healthy for the democratic process." Whereas we had a very vibrant election in our ward, with a great debate and great intensity, and with great passion for public service. That's the value in those kinds of competitions.

So it's your preference to maintain the first-past-the-post system?

Should the city be contracting out garbage?

A blended formula is what we need...Clearly we're not going city-wide on garbage outsourcing...There're a number of different services in waste management, whether it's street cleaning, garbage pickup. The mayor is trying to phase-in privatization from Yonge west to the Etobicoke border. And I've seen some of the numbers and from a cost efficiency point of view, I think it can work. But it needs to be a seamless transfer. You can't do it effectively if it's going to be five years of disruption...

The big thing is not the collective bargaining agreements and how those are transferred, but also our fleet management, and how do you transfer or dispose of the entire fleet? Those are key issues. How that is handled or mishandled is vital to whether this is a win situation for tax payers or whether it can be a sinkhole.

What are Toronto's most positive qualities?

...Despite all the challenges we face, Toronto is a great place to live and grow up. I do visit major cities like New York, London, and Paris--which are beautiful cities, but here, even though it's not perfect, there's a civility, a certain degree of safeness, a real commitment to greenery, a pleasant working environment, and there seems to be a real rapport among Torontonians, people are really committed to making it a better city.

Also, it's a city where people start fresh, where people from all over the world start anew here and that's what's really special about Toronto.

What about our city's biggest shortcoming?

Our biggest weakness is our transportation system--it's just a mess. It's something everybody in this city has to deal with every morning...If you look at mid-level cities--like Boston, Washington D.C., or Barcelona--they have highly mature transportation systems to move people around, primarily underground. We fell asleep at the wheel. We've added six subway stations in thirty years, while some countries are adding new stations, or new subway lines, every year.