Toronto Through the Eyes of Jessi Cruickshank

Jessi Cruickshank, in what must be one of the cooler jobs out there, gets paid to watch bad reality TV and make fun of it. Alongside Dan Levy, and as the redheaded half of MTV's After Show duo, Cruickshank takes on quasi-reality TV like The Hills, The City and Peak Season. It's a show with humble beginnings that now has a studio audience, an American following, and a new spin-off show about general pop culture. It might be Cruickshank's flair for getting to the tough, somewhat perverse questions with dreamy celebrities that might be her legacy.

You're known for your bold style. What are some of your favourite shopping spots?

I like to combine vintage with new. At least two Sundays each month I'm at the St. Lawrence Antique Market. I'm a bit of a junkie for that place... mostly for jewelry. I got a great vintage coat there too.

Value Village is also a huge hot spot for me - the one in Scarborough. The minute you go outside the city for those stores, that's where you find the gold. It's the downtown hipsters that are picking through all the good stuff.

I also really like Ports 1961 at Avenue and Bloor for when I feel like buying myself something really nice. And I like that Holt Renfrew is carrying a lot of young new designers.

You walked the runway at Toronto Fashion Week. Who are some of your favourite Toronto-based fashion designers?

I was a disaster in Fashion Week, but it was fun. I wore a dress from Marika Brose and we collaborated to make my dress for the big Hills finale this year in New York. Her line is called Brose, and she's so talented.

I've worked with Greta Constantine a lot in the past. They're so fantastic. And Michael Kale is also one of my favourites. He did a dress for me, again for The Hills: After Show, and he was doing a dress for Beyonce at the same time. I feel like he must have been thinking "Damn it, why did I agree to make a dress for Jessi? Now I've got Beyonce calling!" I take full credit.

If you could pick any celeb you have/have not interviewed to show them around the city, who would you pick and where would you take them?

Part of me would want to say I'd take Bob Dylan to a jazz club... but I think the other part of me would go "Who is hottest thing right now, and where can I go with them?" So I would choose Taylor Lautner.

He's 17, and assuming we'd be photographed everywhere we'd go, all the tweens would start saying, "Why is he with that old lady? Who is that old redheaded person with him?" But I'm okay with that.

I interviewed him once, and before the cameras were rolling he told me that he had bad sushi in Toronto the night before and he was recovering from it. I would take him to my favourite sushi place in Toronto and make sure that he had a positive sushi experience and I would resist the urge to do something pedophilic towards him.

I went to U of T so I lived in the Annex for a long time, so any of those sushi places in the Annex would do. New Generation, Big Sushi or I'd take him up to some of the all-you-can-eat places. There's a great all-you-can-eat on College that is delicious and affordable. It's not that fancy but he could suck it up. 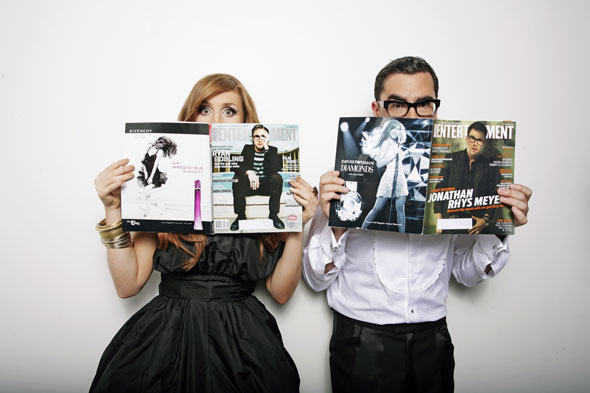 The Hills: After Show became a huge thing for a Canadian show. Did you expect that in the end, you'd be friends with the cast?

The first time they sat me down at MTV to watch Laguna Beach, I was thinking... this Lauren Conrad chick...this Kristin Cavillari chick ... at that point you couldn't have paid me to spend any of my time with them.

I was fresh from university, I thought I was way above them at the time, and since then I've had a lot of fun poking fun at that show and the lifestyle and at the same time, being a big fan of it.

We see each other pretty often, and it becomes harder to make fun of someone on national television when you know them. That's the Catch-22, but nonetheless it's been eye-opening.

I spent a weekend in the Bahamas with Heidi and Spencer. Whether it was a positive or a negative experience, I really enjoyed it. Those two are the most ridiculous human beings I've ever had the pleasure of meeting.

What show would you love to do an After Show of?

Dan and I are both big fans of Glee, but I cannot stand when the teacher starts rapping. It's my pet peeve, and when it happens I have to fast forward it. I would love to After Show his raps, because frankly, I think they've got to go.

You're from Vancouver but have lived in Toronto since attending U of T. What parts of Toronto would you like to bring to Vancouver, and vice versa?

Am I allowed to import the beach and the mountains from Vancouver to Toronto, please? I would do that in a heartbeat. I grew up right by the beach [with] a view of the mountains. I think I'm still adjusting to not having that in Toronto.

Toronto has more culture. I'd move something like Kensington Market to Vancouver, because there are so many cultures represented in the stores, the people and the food there.

And I'd move the laid back attitude from Vancouver to Toronto. The notion that there's no problem spending an entire month in a Lululemon track suit... I would move that to Toronto because it doesn't really exist here and I kinda like it.

Of your "professional" interviews with some stars, which has been your favourite? (Mine was the Bradley Cooper.)

That was horrifically awkward. It made for good TV but at the time I wanted to end my own life.

I'm going to go with Mark Wahlberg. [He was wearing] a very tight white t-shirt and I found myself so completely thrown off by the muscles that were constantly flexing in my face. The whole interview was a blur to me. I remember him being very attractive.

I'm the most unprofessional interviewer ever. I revert back to my 13 year old self. It's really not good. Part of me thinks that the 12 year olds that are watching... maybe they can live vicariously through me.

You and Dan work so well together. What other celebrity duo would you compare yourselves to?

Regis and Kelly would be a massive compliment to me... I don't know about how Dan would like that comparison. I watch that show and admire the back-and-forth chemistry that they have. I can watch them talk about nothing for an hour. If we had 20% of that chemistry, I would be satisfied. Dan might not be happy though - that I just compared him to an 80 year-old man with a hip replacement.