Toronto Through the Eyes of Shinan Govani

Shinan Govani doesn't need an introduction but I'll give him one anyway. The National Post gossip scribe writes about everyone. Well, not exactly everyone, but the socialites, celebrity hair stylists and Hollywood starlets who we should supposedly care about. If you need to know who recently dined at Sotto Sotto, drank at Amber or said what at which fundraiser Shinan has you covered. Toronto Life wrote an in-depth profile of him back in 2006 so I'll skip the rest of his bio.

Of course, much has happened in the last three years, most notably that Shinan has written his first book. Boldface Names has just hit the shelves. It's a semi-autobiographical comedic work of fiction that reads like a lengthy and more personal version of one of his gossip columns. It's a fun novel filled with masked and real names of Toronto celebrities and places. In it, Shinan refers to himself as Ravi who we learn likes to write in the nude and waited three months to consummate his marriage. More than 150 pages of the book are available digitally (for free) on the Harper Collins web site.

In between Boldface Names' recent launch party at Holt Renfrew and an upcoming slate of book signings Shinan and I managed to connect to discuss his latest project, some of his favourite restaurants and why Toronto is a good city to make a living as a gossip writer.

Why did you decide to write this novel?

The idea for Boldface Names was marinating for a while. Basically, being a professional social gadabout is kinda like being a mad scientist in the great laboratory of human behaviour...and it was only right to publish my findings!

It was difficult - I cannot lie. The most challenging thing was getting into the very opposite life-groove - i.e. the life of a gossip columnist is extra-extra-social, and involves always being always out and "on", and the life of a novelist is by its nature solitary. What I needed to do to make this work, in other words, was to sit in a room day after day, handcuffed to my thoughts. It took some practice!

Have you found it necessary to censor yourself or did you put everything in there that you wanted to?

I call this a tell-some, not a tell-all. I wasn't interested, or keen, to pull an Answered Prayers, Capote-style. At the end of the day, I wanted to weave an arch comedy, based on some of the scenarios I've found myself in over the years and, well, some of the characters I've come across.

I have a lot more to spill, yes! But, indeed, I was mindful that I had to get back to my regular racket after all this book hoopla was over - and one thing I've learned in the gossip trade is that I need to walk the great trampoline of being occasionally provocative/biting, but also maintaining access to the rich and famous. That idea loomed over me as I was doing my dance on the keyboard for this book. 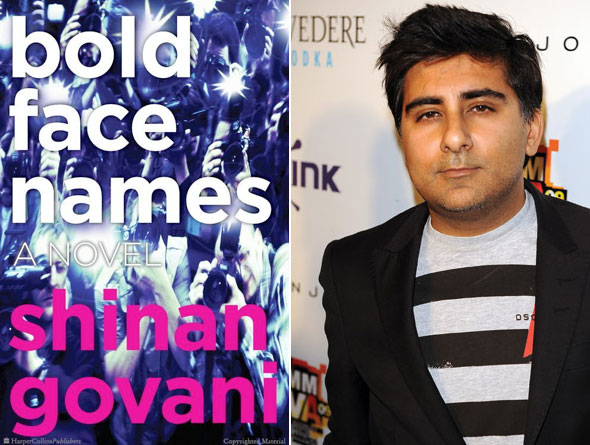 Is this the first of many novels to come?

Another book isn't out of the realm of possibility. I have an idea for something that's more of a political caper - but who knows where I'll go next.

Does being a gossip columnist have a limited shelf life? If you move on, what would you like to do next?

Liz Smith just wrapped up three decades at the New York Post...and Cindy Adams, another ink-spilling dowager, is still at it. I don't think there's a shelf-live, per se, but I do think the kind of writing/coverage you do inevitably changes.

Even now, having done this beat for a while, I have a frame of reference I didn't when I started, so by extension I have a better anchor, and more empathy, in a weird way...and I see things as more que sera sera. The day I get jaded is the day I leave - I will say that. Presently, though, I still find it all largely a hoot...and one of my accomplishments, I feel, is that this beat hasn't made me cynical! Not really at all. Having said that I wouldn't mind opening a restaurant - Graydon Carter-style.

Where are some places you go in Toronto that you're most likely to find inspiration or gossip for your next column?

In what neighbourhood do you currently live?

Describe how you would spend an ideal weekend afternoon in the city?

Perched on my couch watching Californication, Gossip Girl, Nurse Jackie, Lost...! Basically, all the TV shows I missed because I was gallivanting all week long. I do my best not to brunch. I despise brunch. It's the most socially oppressive of meals.

What are some of your favourite restaurants?

Eating out is part of my life's work. So, here's a roll call: Matahari (great, no-scene Malaysian place on Baldwin Street), Nota Bene (suitable for social scribbling), Torito in Kensington Market (has a dash of Almodovar about it), Sushi Kaji (it's worth the trip to the Queensway!), Giancarlo on College Street (Boldface Names abound here, and the carpaccio always make my day), Black Hoof on Dundas (non-cloyingly hip...if this restaurant was a celebrity, it'd be Sofia Coppola!) I could go on.

How do you get around in the city?

By foot (it's how I justify my more extravagant shoe purchases, i.e. I don't own a car!)...or taxi, bien sur.

What makes Toronto a good city to be a gossip writer?

There's hasn't been a long or strong tradition of gossip columns in this country, so part of the fun for me is colonizing this new space...making characters of some of our homebodies, mythologizing our places! Toronto is an enormous market, and quite a transient place in its way, so there's a lot of celebrity in-and-out...this also makes the city particularly conducive to both scuttlebutt and scene-hunting.

Photos by Antony Hare and INKPics.