Toronto Through the Eyes of Jan Wong

Jan Wong is off the meds -- but she's still in therapy for depression. It hit a few years ago, she tells me as we stroll to a quiet location to talk, and when it did it took her by complete surprise. "So what do I do? I write about it."

Trying to write a memoir about depression when you're depressed is, well, downright depressing, but for Wong, who just submitted her manuscript to the publisher, putting fingers to a keyboard is the only thing to do.

Wong's books revolve around her own experiences -- in Beijing Confidential, she writes about the guilt she felt later in life, remembering how as a diehard Maoist she turned in a fellow university student who requested help to flee to America in the middle of the Cultural Revolution -- and in Red China Blues, how her idealism turned to hardened realism as she chronicled corruption and tragedies like the Tiananmen Square massacre as the Globe & Mail's Beijing correspondent from 1988 to 1994.

The Toronto journalist is best known for pissing off celebrities with her unapologetic portraits of them in "Lunch with Jan Wong," a long-running Globe & Mail column that wrapped up in 2002. Sitting with the slight, straight-backed Wong, it's easy to see why celebrities felt comfortable around her. She's every girl's best friend -- perky, naturally self-confessional and sharp. But depression takes its toll, Wong's dark hair and eyebrows look as if they've been painted with mad white streaks and the thin lines around her eyes are like markers of worry. Like her infamous column, Wong's love of her chosen city, Toronto, pulls no punches when it comes to picking at its flaws.

When did you move here?

I came here in 1987 when I left the Wall Street Journal and I joined the Globe & Mail... as a business reporter but my goal was to go to Beijing for the Globe.

And you did end up doing that.

Yes, I was very lucky.

So you've lived in a number of cities all over the world -- how does Toronto compare?

I mean in Boston I was broken into, in New York City my husband was mugged, and in Beijing I get this horrible bronchitis cough because of the pollution, plus the traffic is a nightmare. And Montreal, well I like Montreal too, it's my hometown, but it's nowhere near as interesting in terms of ethnic groups as Toronto is. I just love to be able to go to different parts of the city and feel like I'm in another country.

Friends always ask me, "Where's a good Chinese restaurant?" And I say, "Well you actually have to go up to Highway 7" and they say, "No, no, no!" And I respond, "What's so far about Highway 7?" Frankly the best Chinese restaurants are up north. And I tell them it's a 40-minute drive, there's no jet lag and it's as if you're in Hong Kong or Shanghai.

And what restaurants do you tell your friends to visit when they go to Highway 7?

There's one called Chili Secret that I like it's on Leslie Street north of Hwy 7, there's places in Pacific Mall, but you see the chefs change and the owners change... so it's no good to tell people... because there's so much immigration and people are always coming with money looking for investments a lot of these restaurants change hands very quickly.

Tell me about your neighbourhood.

I live in a very white neighborhood. Very not multicultural. I live at Lawrence and Bayview and it's called Lawrence Park and it's one of the very affluent neighbourhoods.

I wasn't thinking of that when I moved here; I just saw all the trees. And I wanted to put my kids in Toronto French School and that's right in Lawrence Park... Apparently that's really far north, most people who work in the media they go, "You live where?" Like north of Eglinton they get nosebleeds...

It's the first suburb in Toronto. It used to be farmland and the developers, I think his name is Dinnick... he got some kind of zoning so they don't have to have sidewalks cause they wanted to preserve the country feel and they also zoned it so there were no stores. And that attracted me, except that now I find it terrible. I can't go and buy bread or a head of lettuce without walking a long, long way...

So how do you get around the city?

I use my car for buying groceries but if I go anywhere in the city I take the bus. And I just got a bus pass this month 'cause I'm starting to teach at Ryerson and apparently we get a discount and I love it!

One of the flaws of the TTC is you're not allowed to stop your journey for even five minutes... I was just in Rome... and you're allowed an hour or two and you can do a round-trip ticket... If I could stop off at the library on the way home and return my library book and buy some milk and then continue on my journey I'd be much happier.

Besides the TTC is there anything else about Toronto that you don't like?

I don't like the fact that we don't have good bike lanes. When I first went to Beijing most people didn't have cars and the bike lanes were solid, they had physical barriers. They didn't just paint a little white line and expect people to not go and kill a cyclist...

Montreal has done something very interesting, the cars park in the middle of the street and the bike lanes have got little sticks sticking up - they're semi-flexible so if you hit them you wouldn't kill yourself - but if a car hit them it would whack your car...

Or I was in Paris a year ago and they have these VĂŠlib', public bicycle rentals. Very, very cheap and anyone can rent them, and anyone does, including business men and old ladies. I rented it and I was biking around Paris and I'm a real chicken. And what I found is that the cars are pretty good and the reason is the bikes are very good. When they introduced these bikes they had the police out... and any cyclist that runs a light, that went down the wrong street, that did not yield when they should have -- they got a big ticket, the same as the car... You wouldn't think of Parisians as being law-abiding cyclists, but they were. 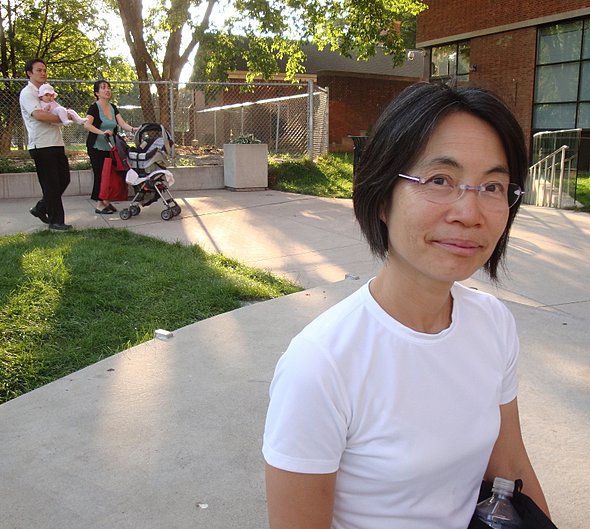 Describe your ideal Sunday afternoon in the city.

An ideal Sunday would involve getting up late, going downtown on the TTC, going to the ROM or the AGO... and spending a couple of hours in the galleries, then eating something good somewhere... I love Vietnamese Pho. Or, you know, a really nice brunch somewhere is great too... I've been to Susur's restaurant, Madeline's, because my son was a bus boy there. That was really nice but kind of expensive but it's so innovative that it's fun. And then I'd probably go for a walk, maybe through Chinatown, it's not that clean sometimes because there's so much density and people are maybe throwing things on the ground, but I like to people watch and look at things.

What is your favourite building in the city?

I do like the AGO. I'm not a fan of Frank Gehry but I do like what he's done with the front of the AGO, the Galleria Italia is spectacular to see this whole sort of like glass, curved hallway with the wooden beams and every pillar has the name of a prominent Toronto family on it and I think that's kind of neat, because it shows the ethnicity of Toronto. It isn't just, oh look at all our rich people, it's look at all our rich Italian people.

I'm usually at home in my bathrobe reading.

What's one place in Toronto that people should know about?

There's a little restaurant inside Osgoode Hall and it's called the Osgoode Hall Restaurant. And it's only open Monday to Friday for lunch and you eat in what I believe is in the former library. So you eat in this paneled room with a very old ceiling, you feel like you're in England in, you know, some 300-year-old building. The food is exceptional and it's not horribly expensive... but they have really interesting dishes and the menu changes all the time. They have a real chef, a really good wine list, and you can order by the glass. The waiters are completely professional -- very few restaurants in Toronto have professional waiters -- these guys are pros. And it's good theatre too... you get all the lawyers coming in from the court and they come in their gowns, so they're sitting there chomping away and they're wearing their jabot and their black gowns and they're eating very fast because they have to get back to court... You should make a reservation if you go.

Since we're on the subject of lunch and you're famous for your lunch column with the Globe & Mail - is there one Torontonian you'd like to have taken out for lunch that you maybe missed out on?

Well let's see, Roberta Bondar comes to mind. I actually tried to take her out but she was too afraid of me, so she kept saying no and I thought, what am I going to say bad about the first Canadian female astronaut? I think she's great. I might have said, "How come you got all that government money to take photos from space?" She got a huge grant, that would be the only thing that I would pick at her for. I like talking to people who have broken through a barrier. So I wish I would have talked to her but she was too afraid. Imagine! She's the first female astronaut and she's afraid of me.

Well you know you had quite a reputation back then, I think almost everyone was a little bit afraid of going to lunch with you.