Toronto Through the Eyes of Adam Vaughan

Toronto's first mayor, William Lyon Mackenzie, stares down at Adam Vaughan whenever the Councillor for Trinity-Spadina works in his sunny City Hall office. Like the never-say-die reformer, Vaughan seems uncomfortable in the trappings of political office, and reluctant to let go of his reporter's training - a neat row of black notebooks lines one side of his desk, the dates of use neatly scribbled in silver on the front.

There's only one reason why Vaughan chose politics - he's hopelessly, romantically and unapologetically in love with Toronto. I met up with the long-time Queen & Bathurst resident to get the dirt on his love affair.

Tell me what it was like growing up in Toronto?

I grew up in a really magical little neighborhood. At a time when a lot of middle-class families were leaving the downtown my parents chose a house in Wychwood Park. Back then it was largely university professors, not that different from the Annex.

So I grew up in a ravine with a pond and played hockey on the ice in the winter like every other kid in the Prairies probably. I was surrounded by nature, and beautiful architecture and in a family that was really engaged in building cities. My Dad was an architect, my mother was part of the neighborhood association and they were really engaged in things like the anti-expressway fight. I was really amazed by it all - as much fun as anything else in my life was going to the rallies and listening to the speeches and working on political campaigns.

Neighborhoods. Art. Young; the best parts of Toronto still haven't been built in some ways.

What's your favourite building in the City?

City Hall. It's an extraordinarily beautiful building. It's not been kept well, it badly needs almost a curator to sustain it's heritage components but the sense of adventure that it speaks to back in the sixties, what modernity means to a city in terms of the fact that it still looks like a space-age building in a space-age time...

The detailing in the building is just phenomenal, the front doors... the curved wood banisters... Everything from the marble floors to the metal cladding in the elevators, there are so many elements of this building that are just so precisely, wonderfully rendered and detailed. And there's parts of it which I wish the public could see more of, like the roof patio on the East Tower has a great view of the downtown.

I'll walk to work or take the streetcar, when it's warmer I start to cycle because it's the fastest way around the Ward. I do drive the odd time to pick up my daughter.

Sleep usually if I'm lucky. But I like the boulevard life; it's the small bars, the small restaurants, the small sort of events that happen. Being on the street late at night in Toronto especially when you get into the market, or along Queen Street or along Bloor Street, it's just these little sweet spots that you find.

If you could tell your fellow councillors to do one thing right now, what would it be?

When you hear some of the people stand up on the floor of Council, I don't think they actually love Toronto. And I think that's a problem. You couldn't get elected in the States if you didn't love the jurisdiction in which you're running. And somehow we've allowed it to become a civic pastime; we just run the city down all the time... For council, that would be the one thing: it's to fall in love with the city all over again on a romantic level, not on a patriotic level, on a romantic level.

The part about this city that's easiest to love is that all of our social advancements have led to economic booms. When we stopped harassing immigrants from Italy hanging out on College Street and allowed them to have cafĂŠs a whole new way of providing food and celebrating our street culture came to life. When Caribana was allowed to birth itself on our city streets and celebrate the diversity of our Caribbean community a whole new economic model emerged out of nowhere. PRIDE and same sex marriage - the little chapel at City Hall has probably performed more same sex marriages than any other chapel in the world. 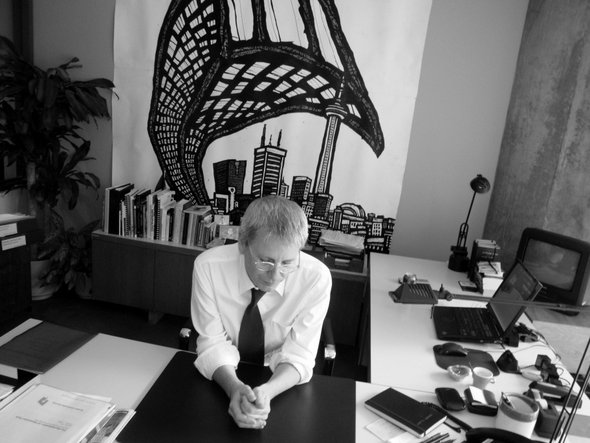 Do you have a favourite place to eat in the City?

Boom! OK. Well I have a five-year-old and an eleven-year-old, so it would start with Clafouti, some croissants and espresso, time in the Park, probably walk along Queen Street and the galleries, lunch at Chippys. And then it would be back home, read have a bit of dinner, maybe stopping by the market to pick up the food. A movie and a drink at night--and away you go.

How do you find out what's going on in the city?

If you stop and listen to the lived experience of people in the city you'll find out what the problems are very quickly and you'll also find out where the potential solutions lie.

What's the one place in Toronto that people should know about?

It's Alexandra Park. It's a neighborhood just south of Kensington Market. We all wonder what downtown neighborhoods without cars would look like and this is one of them. It's a housing project and a co-op that's had a bit of a struggle. But when you walk through Alex Park and you see kids of all the different backgrounds playing together and having fun... and you look at the potential that lies inside a neighborhood like this with such a strong sense of community and some really engaged activists and kids that are doing great in school... Alexandra Park is going to create a road map for the new economy that is going to have to emerge out of the current crisis. I think Alex Park is about to really blossom and it's a place that everyone in the city should walk through and get to understand.

Where do you go for inspiration?

One of my favorite things to do is to take my five-year-old and my eleven-year-old to the AGO and see who can walk through the quickest. It's like a cathedral for inspiration, it's a wonderful building, a wonderful collection and a wonderful place to go with kids because they look at it with fresh eyes every time.

What about the Greater Toronto Area, what's your favourite spot?

Never been there. With no apology and without the slightest bit of shame, I am a Torontonian and the GTA is the rest of Canada. The reality is that there's Toronto and there's the rest of Canada and I don't mean to offend anyone, but I won't apologize for this city, I like it too much.