10 lost but not forgotten record stores in Toronto

Before the resurgence of vinyl, Toronto lost a whole lot of record shops in the 1990s and early 2000s. From massive country-wide chains to truly independent operations, the old stores were places where you might actually snag a deal or rejoice at stumbling upon an import.

Nostalgia for record shops is particularly deep because these are the places that provided the soundtrack to our earlier lives.

Here are some lost but not forgotten record shops in Toronto.

Before Sam's became the de facto example of iconic Toronto retailers lost to changing trends in media consumption, it was a record shop - and a good one at that. As much as the signs and location were hallmarks of the flagship store, during the good years the selection was too.

When A&A; bit the dust in 1993, it wasn't on account of the digitization of music and video. On the contrary, Sam's won the battle for market share when the two Toronto-based shops expanded all across the country. At one point the company had over 250 stores, many of which were absorbed by Music World.

There was a time when the area around Yonge and Eglinton was teeming with record and book shops, though none were as popular as Ed's Record World, which closed in 2007 after having moved a couple blocks south on Yonge St. Before its demise, it was stacked with hard-to-find imports, and much-loved owners Ed and Jonathan were fixtures. 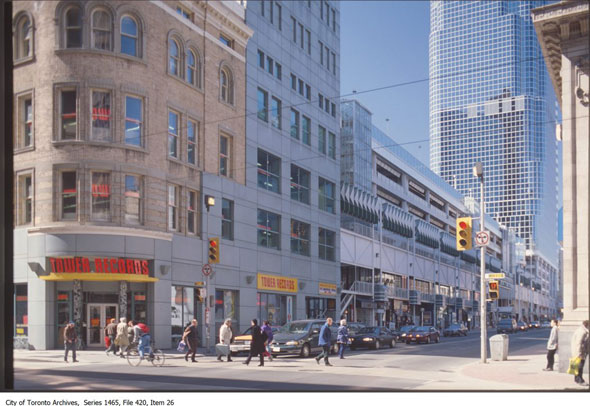 Tower Records made a brief foray into the Canadian marketplace when it opened a flagship location at Yonge and Queen streets in the Jamieson Building (now home to an Atmosphere sports store) back in the mid 1990s. There was lots of talk that Tower would kill local competition at that time, but by 2001 the experiment was over.

The Vinyl Museum had locations all over the city, but the one at 355 Yonge St. right near A&A; and Sam's was probably the best-known. Lots of tales still circulate from these stores, including the owner's tendency to inscribe biblical verses on record sleeves. The Vinyl Museum shuttered in 1999.

The Record Peddler was another one of Toronto's independent music shops that boasted multiple locations. The main one on Queen West closed at some point in the 1990s only to return again in a different spot. The last store closed in 2001, but the business moved online where it still exists in the form of an Ebay store.

This store is somewhat famous for what it ultimately became, which is eOne Entertainment. Yes, this massive distribution company has its roots as a record shop at 629 Yonge St. Run by Vito and Don Ierullo, the shop eventually moved further south before shuttering when the company became ROW Entertainment, the precursor to eOne. 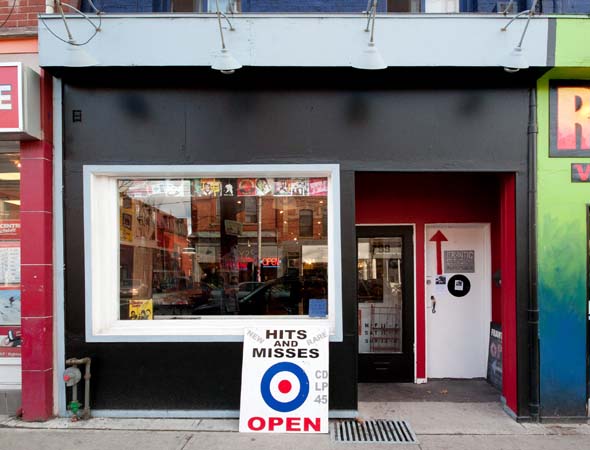 When Hits & Misses closed in 2012, it was a hit to punk and hardcore record collectors in Toronto, who had been frequenting the shop (in various locations) for 20 years. Vinyl was just starting to make its big comeback, but the niche focus and Queen West rent conspired to force the longstanding shop to close.

Vortex started life in Kensington Market before becoming more popular on Dundas near Church. The only location that I ever shopped at was Yonge and Eglinton, which lasted until the end of 2015. When owner Bert Myers announced his retirement, thousands of record collectors shared stories about his legendary stock and helpfulness.

While HMV was never really a record shop per se, it was where many of us bought our tapes and CDs. There's probably less nostalgia for the hundreds of mall locations that closed across the country in 2017, but the flagship store at Yonge and Dundas was the promised land for music fans.