This thrift shop used to be a vital Toronto punk venue

Toronto has so much history that hides in plain sight, from our old cottage architecture to buried rivers that still run underneath the modern city. Even the most unremarkable of buildings, a rather anonymous midtown thrift shop, has an intriguing story to tell.

Walking by 665 St. Clair West today you wouldn't think that it was once an important incubator for Toronto's punk scene in the 1970s and early '80s. But, like the street itself, there used to be an incredible amount of energy here.

What now serves as an outlet for the Salvation Army chain of thrift stores started as The Christie Theatre, one of a surprising number of cinemas that used to line the street from the turn of the century to the 1960s when most of them shuttered on account of television's rise as the dominant form of visual entertainment.

The Christie Theatre operated between 1919 and 1963. It was one of the first Toronto cinemas to host double bills, a concept that had yet to be popularized in the 1920s.

When the space ceased to show movies it was converted into a dance hall known as the Maple Leaf Ballroom.

Little is known about the venue through the late '60s, but by the '70s it had become a key punk venue in the city. This might seem improbable based on the current state of the midtown neighbourhood, but St. Clair West was significantly seedier and culturally vibrant in a youthful sense 30+ years ago. 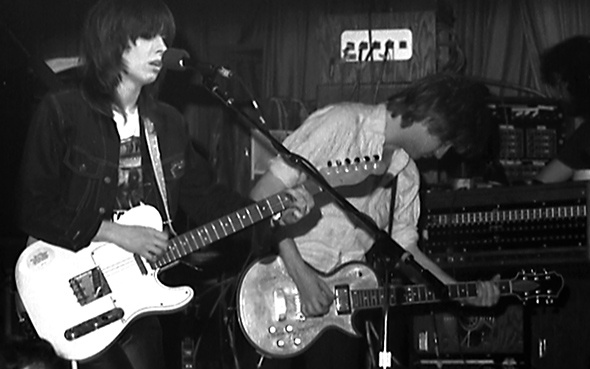 Along with hosting local bands, the Maple Leaf Ballroom provided a stage for touring groups that would go on to achieve international acclaim. The Pretenders played one of these early and now legendary shows (1978), but it's U2's second Toronto gig that lives on as the most famous event to take place here. 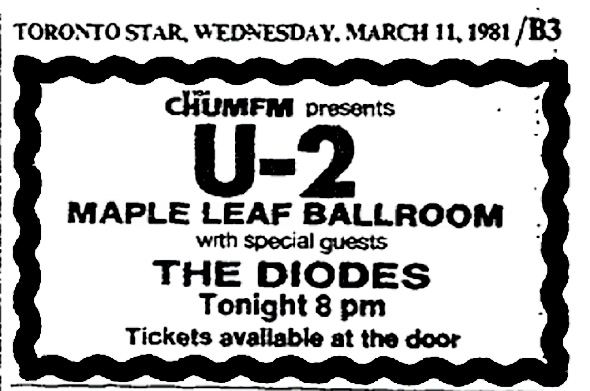 The date was March 11, 1981. The upstart band was touring in support of their first album Boy, which had got them enough attention to earn a spot on Citytv's The New Music. Even if the music was more rough around the edges, a few U2 character traits were already in place when they played Toronto for the second time (the first gig was at the El Mocambo in 1980).

For one, Bono would talk about himself and the band with a defiant confidence that would become one of his hallmarks. But, perhaps more importantly, the surviving reports from the concert are unanimous in noting just how energetic, tight, and attention-commanding U2 were back then.

Yes, the aging rockers aren't so cool now, but in 1981 they turned heads. So too did The Diodes, the much-loved Toronto punk group who opened the set. In an effort to drum up some excitement, the lead singer, Paul Robinson, reputedly knocked down the mirrored ball that spun above the ballroom.

His last attempt sent him crashing off the stage, a feat that simultaneously earned the respect and chagrin of the 300 or so people assembled to watch this seminal Toronto concert.

While U2 was the most famous band to play the Maple Leaf Ballroom, it's crucial to note that throughout the '80s, it had become a venue that supported the burgeoning reggae and rap scenes in Toronto. Not much is recorded about this period, though the venue was important enough of a place to host the second annual Canadian Black Music Awards. 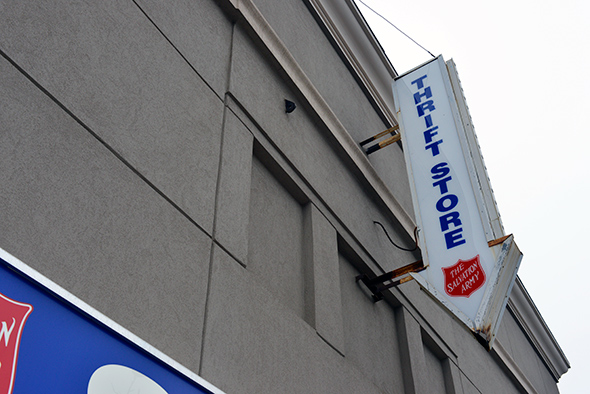 By the early 1990s, the concert venue had given way to a bingo hall. The arrow-shaped sign that now adorns its facade derives from this period. Some rather austere aluminum siding was added to the exterior of the building before its current plaster job was smeared on.

So many layers to the palimpsest of history here.

Walking through the aisles of mothball-scented clothing today, one can still trace the signs of the old music hall. The varying height of the ceiling hints at the old balcony, while the temporary fixtures and sheer size of the interior serve as reminders that this was once a place meant for hundreds to congregate.

The last time I found myself in the place, summer of 2014, I was perusing the haphazardly assembled music section. Sitting among the old Billy Ocean, Glass Tiger, and classical music cassettes, there was a bashed up copy of Boy semi-miraculously sitting there.

I didn't buy it, though.

It seemed to belong contained within these walls.