This past Monday was an incredibly fortuitous one for us in Toronto - not only was our weather report mercifully devoid of extreme cold alerts, but rock icons Sleater-Kinney made their return to the city with a long-awaited performance at the Sound Academy.

When the Portland trio announced their "indefinite hiatus" in 2006, it left a noticeable hole in the musical landscape. That was probably the last time I personally heard the words "riot grrrl" used in regular conversation, and for a while it seemed like that era's significance had simply been forgotten. 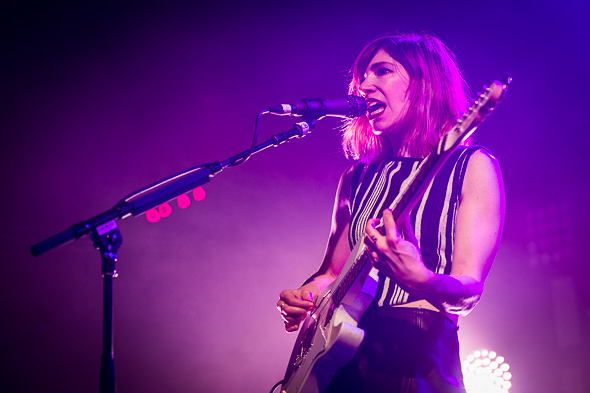 Carrie Brownstein recently said in an interview that their subsequent inactive years "felt like something was on pause for a really long time," which explains why their recent reunion - complete with a full tour and a brand-new album that continues to push both musical and political innovation - has been so eagerly welcomed, even needed. 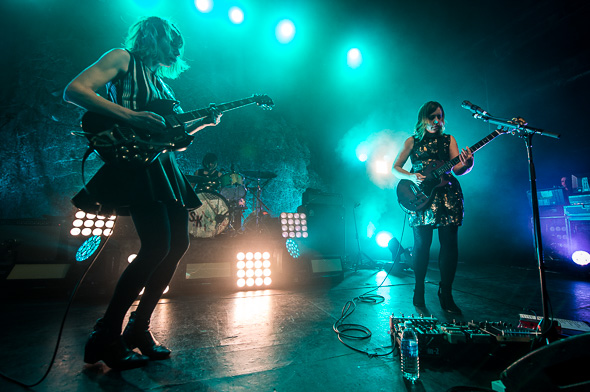 Their Toronto date - also the last of this inaugural tour stretch - was a bit of an anomaly in that it still hadn't sold out as even in the minutes before the opener's set.

This is a band whose reunion rumours have been salivated over for nearly a decade, whose other tour dates (including two huge stands the week before in New York City) sold out within seconds, but Toronto fans were dragging their feet for some reason. I'm inclined to blame the less than desirable venue choice, but I'll resist the urge to deteriorate into another Sound Academy rant given that it's not long for this world. 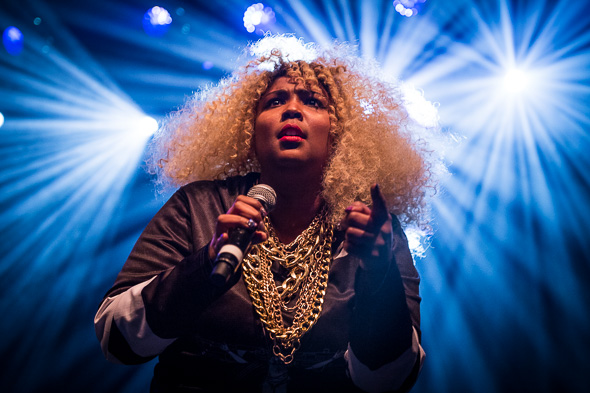 In any case, lagging tickets sales clearly couldn't have been that big a deal; an almost-packed house was already firmly in place as DJ Sophia Eris unleashed the first tunes of the evening. Hyping the audience with snippets of The Runaways, Le Tigre and Bikini Kill, she gave a bit of a crash course in Riot Grrrl 101 before Lizzo bounded out on stage, a flurry of platinum-blonde curls and contagious energy.

Since S-K draws in a much more diverse crowd than your typical rock band, it's no surprise that Lizzo-and-crew's eclectic, infectious and proudly body-conscious hip hop got everyone enthusiastically moving. 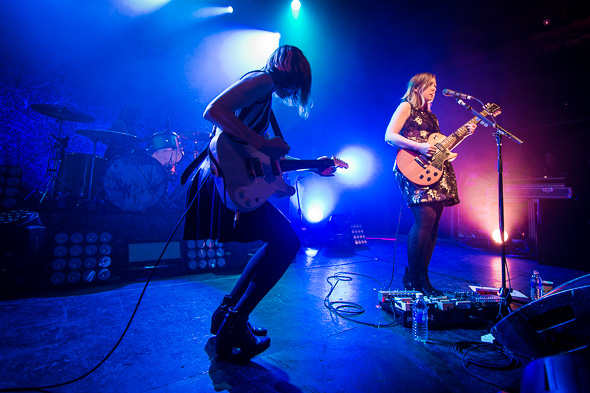 The moment when Sleater-Kinney finally took the stage to end their 10-year Toronto absence was nothing short of dramatic. Ripping into "Price Tag" and "Fangless," the first two tracks off of just-released No Cities to Love, they exhibited their most polished and assuredly powerful formation yet, backlit by vivid strobes and an entrancing projection.

I'll begrudgingly admit that while the Sound Academy isn't my favourite venue, most of the smaller, less technically outfitted clubs I love in the city couldn't have done the band such visual justice. And shockingly, the sound mix turned out to be excellent as well.

The impressively thorough 24-song set provided most songs off the new album, but was equally generous the band's back-catalog, pleasing fans new and old. Carrie's more sleek vibe as of late has her playing a delicate Fender Thinline on many new tracks, but she quickly pulled out her classic heavy-duty Guild for the Hendrix-esque swirl of "What's Mine is Yours" and red SG for old favourites like "Youth Decay." Playing up the virtuosic guitar lines with her trademark high-kicks and windmills, she continued to cement her status as one of the greatest living guitarists around. 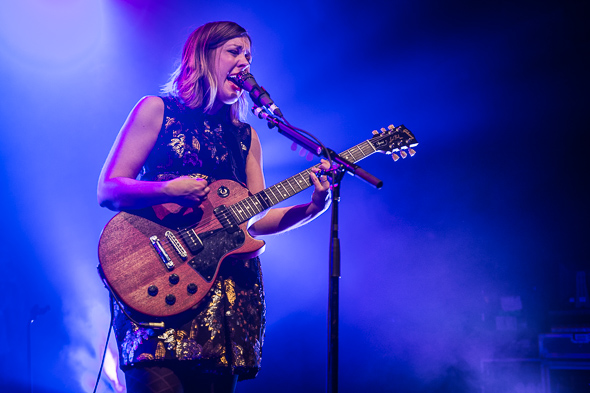 Corin Tucker's powerhouse voice cut through the room with just as much shrill intensity on new songs like "Surface Envy" as older standbys, including the moving closer off of 2002's One Beat, "Sympathy." Though she usually demures from big frontwoman displays, she was emboldened to speak passionately about women's rights and equality before launching the encore with "Gimme Love" - sans guitar, whipping her hair and reaching hands out to the front row. 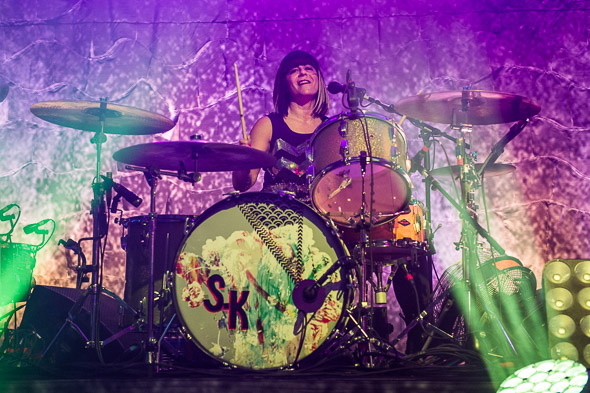 As always, Janet Weiss was the rhythmic engine behind the band, her fills on songs like "Entertain" and "A New Wave" sending shockwaves through the room. Sleater-Kinney's new incarnation also features a fourth touring member, Katie Harkin, who adds occasional flourishes of guitar, keys or percussion. I was a bit worried adding an extra player would ruin the trio's unique chemistry, but her presence was largely unobtrusive (and at times, not even noticeable). 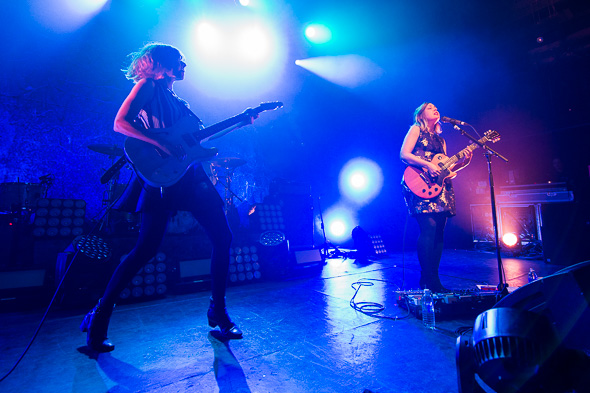 Since the show was their last with tourmates Lizzo, they invited all the members up to join them on the final tune of the night, Dig Me Out's "Turn It On." Right up until the final chords, the energy from both band and crowd never wavered - it was as if the past decade had only been a few months, and they'd never really left. 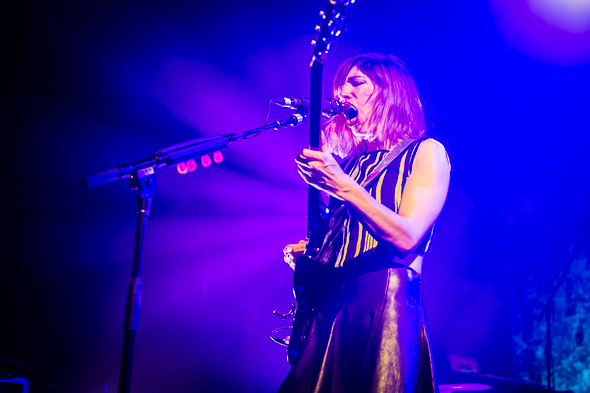 As if the evening hadn't been magical enough, I managed to make my way out of the ill-located Sound Academy and quickly found a cab driver actually willing to take me as far as the closest subway station. I'll take that as the truest sign that the spirit of Riot Grrrl, the belief that women can accomplish anything (even getting out of The Docks after midnight), lives on.