Halloween parties in Toronto give you plenty of places to show off your costume (or costumes - you can't be every Bob's Burgers family member at once), and while the fun starts this upcoming weekend, Halloween falls on a Friday this year so the best scares will be happening on the jolly old 31st, as you party hop yelling "trick or treat" at the top of your lungs because your parents always made you say "Halloween apples" instead when you went door to door - no? Anybody?

Remember to play safe this year and not accept candy-coloured alcohol from strangers or make out with anyone who can't prove their fangs are removable. Costume-wise, beware the following unacceptable outfits: Rob Ford, Rob Ford's [anything], Rob Ford as [anything], [anything] as Rob Ford. Leave your political snark where it belongs - in the ballot box on Monday. Then let's say Ebola is out too, but ISIS is fine if it's like, Archer ISIS.

Here's our spooky guide to Halloween parties and events in Toronto for 2014. 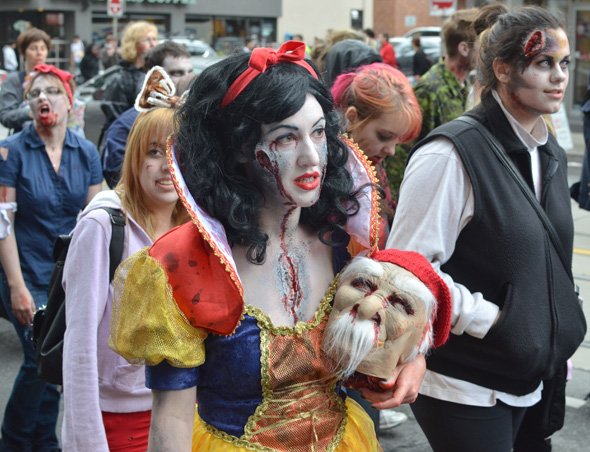 Thrill the World | Oct 25 | Nathan Phillips Square | Dance at 6pm | PWYC
Those sleepovers where you danced the zombie dance while your friends' parents begged you to go to sleep and stop making noise up there are about to pay off. A spooky cast of dancers are calling on Toronto to rattle its gross, brain eating (costumed) bodies in an attempt to set a new world record for the most people sashaying the zombie dance from Michael Jackson's Thriller video. Toronto held claim to the first such record in 2006, in case you dance best under pressure. Here's the info you'll need if you want to dance. If you just want to watch, look out for the bitey ones.

Night of Dread 2014 | Dufferin Grove Park | Oct 25 | 4pm | PWYC
Join Clay & Paper Theatre on Saturday, October 25th for the15th annual Night of Dread, when people dressed in black, white, and dreadful parade their private and collective fears through the darkened streets of Toronto. Night of Dread is an evening of pageantry, music and masquerade, with towering puppets, stilt dancers, fire-spinners and fearful masks. The interactive parade begins in Dufferin Grove Park at 6pm.

GHOST Stories Told Live | Oct 28 | The Garrison | 7:15pm | Free
True Stories Told Live is taking on ghostly autobiographical tales. If you don't believe in ghosts, period, ever, this supernatural incarnation might affect TSTL's brand for you. But what is truth? Costumes are acceptable.

Halloween Spookcade | Oct 31 | Bento Miso | 8pm-1am | PWYC
This party and "spooky video game arcade" includes a huge line up of games just waiting for you to track fake blood all over them, plus they're serving up food and cocktails to keep you on your (crooked and dismembered) toes all night. 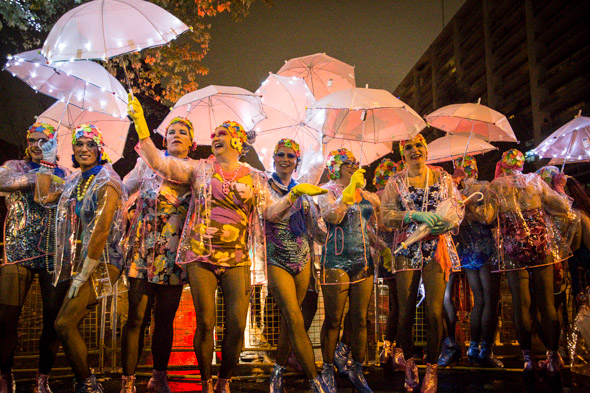 Stanley Kubrick: The Exhibition | opens Oct 31 | TIFF Bell Lightbox
Can you stomach seeing those blue dresses the scary twins wore in The Shining up close? Opening Halloween night, TIFF's Stanley Kubrick: The Exhibition is next in a long line of stellar, fan-pleasing installs at the King Street cinema (such as this creep-out Cronenberg tribute). The exhibit, featuring documents, swag, and props like 'Starchild' from 2001: A Space Odyssey, runs until January 25, which might give me time to get over those Shining nightmares I had from age 7-13. Maybe.

Free Surgery Offered On All Hollow's Eve | Oct 31 | Mighty Brave Productions/ Dufferson Herman Arts/ Haus of Dada
Halloween is always the same old thing. Get dressed up, wander, drink, pose for pics. Not this year though, not this year. [Editor's note: we do not actually recommend free surgery. Any free surgery you incur is of your own volition.]

Sorauren Park Pumpkin Parade | Nov 1 | Sorauren Park | Free
This annual tradition is one of Halloween's quieter events. Bring your pumpkin down to get in line (the line to where? What happens to jack-o-laterns when they die, ma?), or just wander through admiring the artwork of your fellow citizens. Over 2,000 pumpkins are expected to attend.

Halloween Massacre | Roy Thomson Hall | Oct 31 | 9pm | $20
Halloween Massacre is a true Halloween ball located in the heart of the King Street theatre district. This event has room for 1800 people, complete with two rooms and two distinct sounds. DJs will be spinning the latest in mash ups, top 40, R&B and hip-hop.

5th Annual Fresh Prince Of Bel-Air 90's Halloween | Sound Academy | Oct 31 | 10pm | $25
This packed dance party is a tribute to old school hip hop, R&B, dance, house, reggae, and pop from the 90's! Picture a dance floor full of drunk people attempting to do the Carlton dance. Get your tickets early, this party has sold out 4 years in a row!

FRIGHT NIGHT | Oct 31 | Adelaide Hall | 10pm | $10
Toronto's Jungle Drum & Bass scene celebrates Halloween at Adelaide Hall this year, with room for 500 screaming zombies, and a sound system to drown them all out. A big crew of rotating DJs will be throwing down jungle drum 'n bass, and wild rave sets all night long.

Gladstone's Halloween Extravaganza: Decades of Dance | The Gladstone | Oct 31 | 8pm | $35
Dance, play and party at the Gladstone this Halloween, where they'll be celebrating the best in music from the eras of the 50s to the 00s. You can count on all the cheesiness, sing-a-longs, dance-moves, hairdos, denim tuxedos, and everything in between.

Hell On Earth 3 "Apocalypse" | Oct 31 | El Mocombo | 9pm | $20-$30+
Here's a spooky thought: if the rumours are true (and this time, it looks like there's no white rock & roll doves to save us - or possibly even that iconic sign), the El Mo is no more as of early November. This all ages rave that will send the El Mo off in style on Halloween night, so dress as an EDM version of your favourite Rolling Stone - they all look like zombies.

CHRONOLOGIC HALLOWEEN | Lee's Palace | Oct 31 | 9pm | $10
CHRONOLOGIC is a dance party through the ages with music from 1890 to 2014, played in chronological order. For the 10th year in a row, the Goin' Steady DJs are pleased to announce their 2014 Monster Mash will be bigger, better and scarier than ever. Toronto designer Adam Belanger (Kubrick The Exhibition / Cronenberg Evolution / Young Lions Music Club) to transform Lee's into a frightening array of spooky mayhem.

The Legendary Halloween Bash! | Steam Whistle Brewing | Oct 31 | 9pm | $33 advance
This Halloween bash takes over Steam Whistle Brewing for not one but two nights! Dare to enter the creepy haunted house, be mesmerized by the incredible costumes and eye popping decorations. And be prepared to dance the night away to the music of DJs Field McQueen & Nino Brown (Friday) and DJs Skratch Bastid & Fields McQueen (Saturday).

Blood Sweat and Queers | The Steady | Oct. 31 | 10pm | $10
Head to Bloorcourt event and party hub The Steady to dance your costumed butt to DJs Aeryn Pfaff and Frustra - then sit that butt down and get a mini reading from Psychic Betsy Balega. There will be witches brew, a costume contest, and, probably, going by our knowledge of the current Steady incarnation, spooky donuts.

Society of Beer Drinking Ladies - Halloween Bash | Oct 31 | Secret Location | 8pm | $25
These sudsy dames traditionally meet on the last Friday of the month, so that means a Halloween bash was a must-do. Men are allowed after 10pm. Cover gets you a beer and a "morning gift" (beers are $6 after that).

breakandenter & Box of Kittens: A Night to Dismember - Hallowe'en Party | Oct 31 | 10pm | SPK 20
Two of Toronto's best promoters join forces to create a carnivalesque two-room dance party where it's okay to be a freak (and not just pretend for a night). Spencer Parker, Mike Gibbs, Jamie Kidd, Martin Fazekas, Ali Black, Aquatic Mind, and Shea Butter a.k.a. Shea Altadonna will supply the music.

DUDEBOX IS FUCKING DEAD V: Return to the Carwash of Doooooom | Oct 31 | Planet Car Wash | $10
Party in a carwash for charity on Halloween thanks to the dudes who brought you that party at Honest Ed's that didn't actually happen at Honest Ed's but they goshdarn tried, didn't they? Yes Yes Y'all's Nino Brown & Yes Yes Jill are on the DJ line up, so don't doubt the supreme legitimacy of this event.

Death to TO IV | Oct 30 | Silver Dollar / Comfort Zone / Junkyard
The Halloween covers-pocalypse contines this year with a line up including The Jesus Lizard! (The Soupcans), Hot Snakes! (Burning Love), Metallica! (Cellphone), Beastie Boys! (Phedre, Hooded Fang, Moon King, Hellaluyah), Babes in Toyland! (Mexican Slang), and U2! (Actually U2). (Kidding. Dilly Dally). There will be three stages and many a spooky surprise in store.

Fire Rock With Me: A Very Twin Peaks Party | Oct 31 | Tranzac | $6
What would Halloween be without a room full of log ladies? I'll be dressing my pug up as the log, so my costume wins. DJs will play synth-gaze and psych in the Tranzac mainroom while you munch on cherry pie treats, talk backwards, and wait for a special performance by The Owls are Not What They Seem (TOANWTS) featuring Patrick Grant.

SBTRKT / October 31 (and November 1) / Danforth Music Hall / 7pm / $26
This two night stand by SBTRKT is part concert, part dance party - if people aren't moving to his futuristic bass pop at these shows something has gone wrong. Maybe for Halloween he'll play without his trademark mask for a change? Bonus: this should be done early enough that you can still hit a costume party. BB

Did we miss a noteworthy ghoulish throwdown? Let us know in the comments.