Lost music venues in Toronto serve as a reminder that when it comes nightlife in this city, the only constant is change. Just as a cool new concert venue opens up somewhere in the city, there's another venerable music institution shuttering its doors across town.

With the Guvernment Entertainment Complex - the longest-running club currently in Toronto - announcing its impending end for early next year, it's clearer than ever that no amount of seniority or success in the scene can keep any of our beloved establishments safe. [Insert snide comment about condos here.]

After seeing the lively discussion generated from our post on the top heavy music venues in Toronto, we got to thinking about some of our favourite spots of yesteryear - the ones that defined a cultural movement, hosted iconic musicians or could've just been great if they were given a fair chance to build a clientele.

Here are 15 of our favourite defunct Toronto venues. R.I.P.

The Big Bop
Ah, who could forget that giant purple box at the corner of Queen and Bathurst. The Big Bop's three music rooms became the central hub for Toronto's resurgent 90s punk scene, drawing a mostly younger crowd of outcast thanks to all-ages shows and a distinct lack of pretension. But as Queen West's gentrification continued unabated, it was inevitable that this symbol of counterculture would eventually get the axe.

A friend of mine actually got to play The Kathedral on one of those last fateful days; half into her set, a staff member yelled to "just get off the stage, there's no one here." I always thought that was a depressing, oddly hilarious, perfect end to The Bop - it's how I'll always remember it.

The Gasworks
Forever immortalized in Wayne's World ("always a babe-fest"), The Gasworks was a headbanger's dream at the height of 80's metal. The long-haired and leather-clad enjoyed overflowing quarts of beer and loud bands in what could really only be described with the three d's (dank, dark, dive), and though the occasional scuffle happened every so often, it was worth it to see acts like Rush, Platinum Blonde and Triumph get their big break.

What's there now: A surplus and sporting goods store. 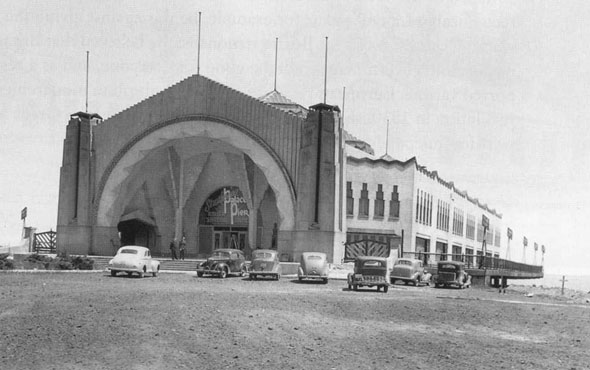 Palace Pier
Back in the day when people were super into the Lindy Hop, Palace Pier was the lakeside party destination Torontonians had long been waiting for. Despite hindrances of The Great Depression, lack of funding, and other developmental hiccups, the expansive hall finally opened in 1941 and enjoyed years of performances from big-name jazz and country performers including Duke Ellington, Peggy Lee, Patsy Cline, and Johnny Cash. Trouble never seemed far behind, however, and the Pier suffered the ultimate fate of burning to the ground in 1963.

What's there now: The Palace Pier condo towers (and a small memorial to the original venue near the waterfront).

Ted's Wrecking Yard
Indie rock is so ubiquitous at this point, it's hard to remember that there was a time when it didn't get enough attention. Ted's Wrecking Yard came along at a time when a lot of our most famous indie acts would've had trouble getting booked elsewhere. Jason Collett, Broken Social Scene, Metric, Peaches, Kathleen Edwards, and many more got the chance to play to small yet steadily growing audiences here, occasionally as part of Wavelength, which also started as a weekly showcase on the club's small stage.

What's there now: An LCBO store. 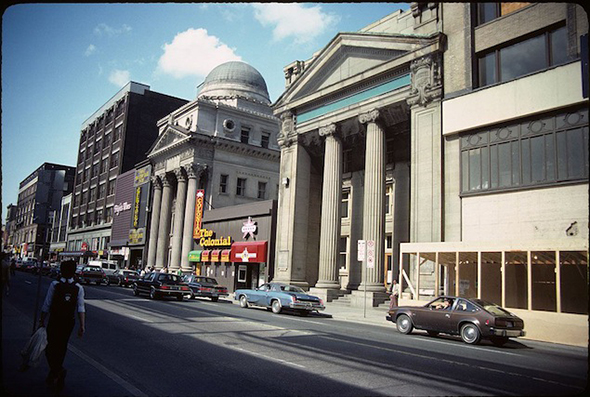 Colonial Tavern
Around the Palace Pier's prime, Colonial Tavern was also making jazz-lovers jitterbug much closer to the city's centre. The building's two floors were relatively small to be hosting such big bands and lively gigs, but somehow they made it work. Dizzy Gillespie, Miles Davis, B.B. King, and Big Mama Thornton were just a few of the greats to grace the Colonial's humble stage, and the owners constantly struggled to accommodate the influx of eager patrons. Later, the club kind of lost some of its gravitas as it transformed into a more lowbrow rock spot, but its jazz legacy is unforgettable.

What's there now: An empty lot set to be part of the future Massey Tower condo.

The Edge
At the end of the seventies, the changing face of punk music was having trouble getting a foothold in the city. Enter The Edge: headed by infamous duo The Garys, the unassuming space gave way to some of the most avant-garde post-punk, new-wave and art rock bands of the era. The progressive booking encouraged a mix of unknowns alongside well-known names like XTC, and local fans could often see their favourites play multiple nights in a row. With the impact made by The Edge after three short years in existence, just imagine what it could've done with more longevity.

What's there now: An emergency shelter for women. 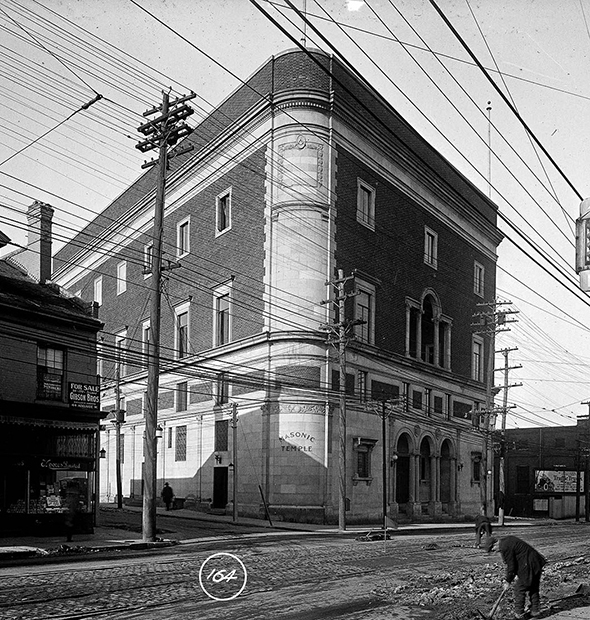 Masonic Temple
It's funny to think that his historic corner of Yonge and Davenport was once a sacred meeting point for the Freemasons - its usage since has been anything but low-profile. In the 60s it was the (former) Rockpile, a large concert space which notably hosted Led Zepplin on their first North American foray, then "The Concert Hall," where many more big names played including David Bowie, Frank Sinatra and Black Sabbath. The rock-solid structure and cavernous interior always made each show a grand experience.

What's there now: Bell Media most recently used the Temple for MTV Canada's studios, but sold it to Info-Tech Research Group last year.

Maple Leaf Ballroom
An unassuming old building on St. Clair West that was originally a movie theatre, the Maple Leaf Ballroom reopened in the 60's as a dance club. In an elegant room with a classic mirrorball, live music was usually performed by Irish showbands invited to town by owner Jimmy McVeigh. It's greatest claim to fame, however, is when McVeigh booked an up-and-coming Irish rock band named U2 for a gig in 1980. Strangely, it seems many more people claim to have been there than could have been accommodated in the 300-seat room. 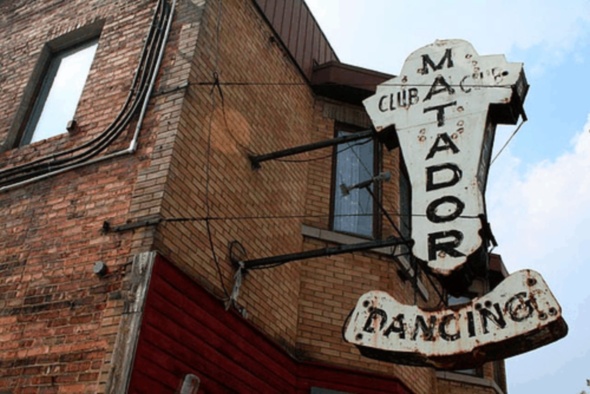 The Matador Club
This former bowling alley may not have had a ton of "official" concerts after being opened in the 60s, but true country fans knew that most big performers would wind up here after their headlining Toronto gigs and could be counted on to wile away the late hours with an impromptu live set. Stompin' Tom Conners and Loretta Lynn were just a couple of the famed regulars here, and rumour has it that Leonard Cohen loved the place enough to write "Closing Time" about it. Not many after-hours clubs in the city have reached this kind of legendary status.

What's there now: The land was purchased in 2010 to become a "living arts centre," but as of now is still vacant and under construction.

The BamBoo
At the height of Queen West's 80's cultural renaissance, The BamBoo carved out an essential niche for world music on the strip. A colourful venue rife with African artwork and tropical touches, the club featured a very communal mix of reggae, jazz, ska, hip hop and soul, which was refreshing in a neighbourhood dominated by rock shows. Crowds were attracted just as much by the delicious Caribbean food on the menu as they were the diverse music, and a social consciousness brought in a lot of meaningful events, from community fundraisers to Afrofest. 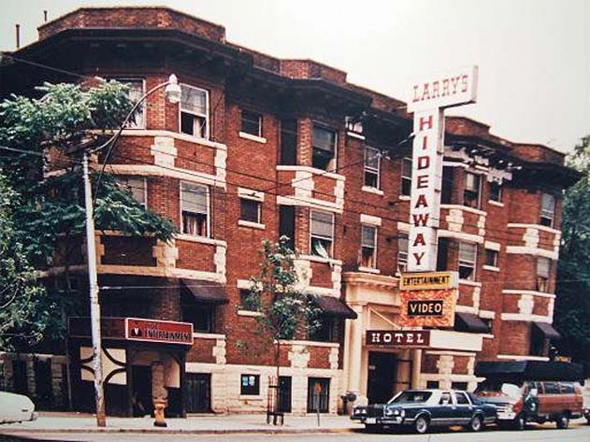 Larry's Hideaway
Holed away in the Prince Carlton Hotel's basement, Larry' Hideaway was often lovingly described, at best, as a disgusting cesspool by all who frequented it. But despite its vile reputation, Larry's made history by hosting some of the best punk and metal shows Toronto has ever seen. Burgeoning local pioneers like Anvil and Razor played memorable sets on it's low stage, which was aided by having a surprisingly good sound system and The Garys on board for bookings.

Industry
Towards the end of the 20th century, there still wasn't much happening in what's now known as Liberty Village. Then along came Industry, an ambitious nightclub at the corner of King and Stratchan that sought to bring house and techno music mainstream recognition. One of the coolest things about Industry was how diverse the clientele was - regardless of race, class, or sexual orientation fans happily grooved together to tunes spun by the likes of Fatboy Slim, Daft Punk, and Basement Jaxx. Top Toronto DJ's were always given equal attention as internationally recognized performers, propelling our city's own talent to the fore. 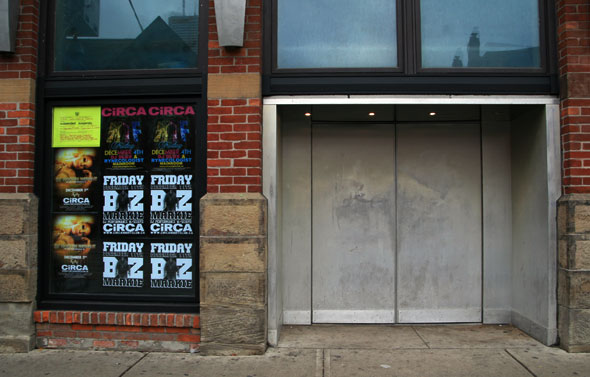 Circa
People always say to "dream big" - what they don't tell you it to make sure your bank account's bigger first. Infamous NYC nightclub impresario Peter Gatien returned to his homeland in 2003 and immediately attempted the lofty goal of opening Canada's largest club in Toronto's entertainment district. The initial results were impressive: a massive, artistically driven, multi-room playhouse that hosted major DJs and pop stars like Lady Gaga, Kanye West, Rihanna and Lupe Fiasco. Too bad it had to become "The Titanic of night clubs."

Who's Emma
Radical politics and hardcore punk collided in a big way at Who's Emma, a Kensington Market collective and meeting space. Named after famed anarchist Emma Goldman, it was a multi-purpose venue which served as a store, zine distributor, activist meeting hub and DIY concert venue. It's probably not surprising that an anarchist-run organization struggled with a lot of infighting and interpersonal turmoil which likely contributed to its demise, but while it was around, it served as a vital platform for the more subversive, often ignored underbelly of politically motivated nineties punk. 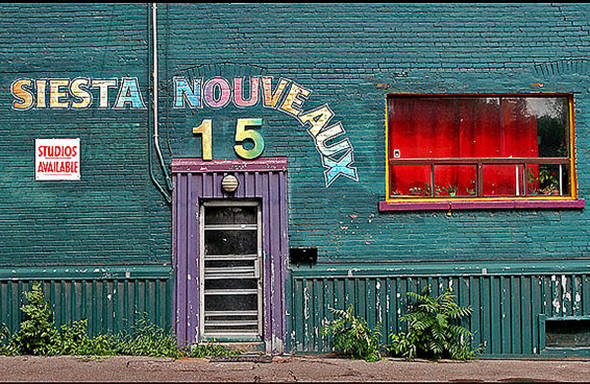 Siesta Nouveaux
The DIY punk spirit has been shuffled around the city many times over, but it seemed like it'd found its best home yet at Siesta Nouveaux. Basically held in an apartment, shows here always felt like the best house party ever - tons of all-agers crammed into a sweaty, graffiti-covered room with loud bands and the ever-present threat of cops shutting the whole thing down. Despite the chaos, a tolerant atmosphere prevailed, and the welcoming vibes always gave punk lovers a safe place to find the like-minded and let off steam.

What's there now: It's been levelled to a parking lot, but will be developed into a condo in the future.

What other once-great Toronto venues do you miss? Let us know in the comments.