CNE Bandshell announces no women needed on stage
You know what will make those absurd foods to the CNE's fair go down easier? Down with Webster, Platinum Blonde, Dwayne Gretzky, and Hanson. Oh, but no women. There will be almost exclusively white males on stage this year at the Bandshell, and pretty much everyone (maybe not this PRTY H3RO band?) will be able to non-metaphorically rock with their cock out. Food poisoning, meet your musical line up equivalent. 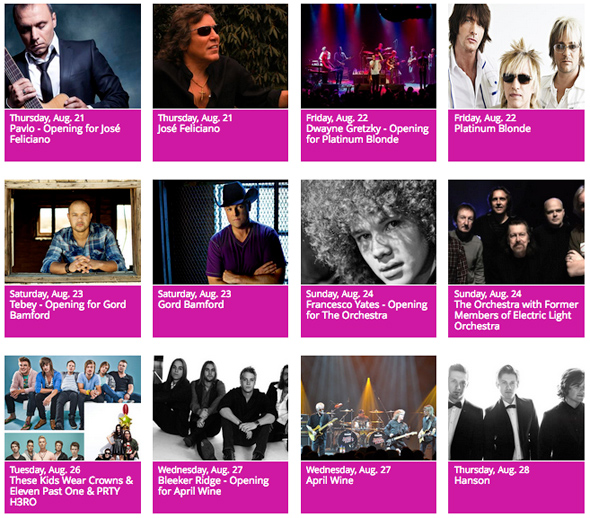 We deserve better, Toronto - someone call Lido Pimienta to school these bookers.

New Damage Records Summer Sampler
If you haven't grabbed this punk comp yet, it's a free download of 15 tracks including Biblical, KEN Mode, and a band called Youth Decay doing a song called "Little Winnipeg" - Youth Decay, do you mean Galleria Mall? Because Little Winnipeg proper in Toronto is Galleria Mall. I can't tell if you guys are singing about Galleria Mall because you're opening your mouth really wide when you sing.

Weaves remixes
If you haven't heard these remixes yet you're in for a fun time. And remixes should either be fun, really scary, or both. Press play to hear Babe Rainbow, JFM, Beta Frontiers, Thomas and more take stabs at Weaves' tracks.

Reverend Moon - Old Graves
The raccoons, rats, crows, and possibly zombie dogs are plotting against Toronto in this old timey karaoke vid for Jakob Rehlinger's (Moonwood, Arachnidiscs Recording) Reverend Moon. I hope the animals do all kill us all. You absolutely have to watch this video - it's like Bob Dylan singing for the (inevitable) raccoon uprising. I never knew Toronto's fringe folk scene could be so evil and fun.

K-os - WiLD4TheNight (EgoLand)
Can't Fly Without Gravity isn't out until 2015 on Dine Alone Records, but here's a snack. Did you forget about K-os? Nu uh. I'm not sure about the production, but vocally it's a fun track. What's up, Toronto?

Dirty Frigs - Osiris
Toronto's grunge revival continues with the indie psych rebrand, begging the question: has anyone noticed? At least they acknowledge Nirvana in the vid.

The Wilderness of Manitoba - Leave Someone
I can't remember if I've posted this yet either! TWOM's Between Colours is out September 16.

Veld
Taking place on the outskirts of the city and billed as "Canada's largest music festival," Veld is one of two must-see events for the EDM crowd. Veld keep the party in daylight hours, and this year's "chosen ones" are Armin Van Buuren, Calvin Harris, Ingrosso, Knife Party, Nero, Martin Garrix, and so many more manning the decks. As a bonus, it's all-ages. Aug 2-3, Downsview Park. MF

OVO
Drake's annual gift to Toronto during Caribana weekend does something amazing: sell out shows based solely on knowing that it'll be a good time. This year brings reunited duo Outkast to town for day one, Drake headlines day two, with a lineup of "special guests" filling out both days. Last year's surprises included Lil Wayne and Kanye West trust Drizzy to put together an unforgettable show. We're pretty sure Lil Wayne will be there - just saying. You don't have tickets, I'm sorry. Aug 3-4, Molson Amphitheatre. MF