Greys is a 4 piece united by their longtime love for noisy bands like Nirvana and Fugazi, to name the big ones. The band have been getting name dropped like crazy in Toronto - get your hearing checked out if you haven't heard of Greys yet, you old rocker, you - along with other TO punk renaissance (can we call it that?) acts like METZ, Fucked Up, and PUP. Now that they're receiving replies to their emails, we checked in on the Toronto band that seems to consider "loud" a genre - and makes a good case for it.

Friends since high school, Singer/guitarist Shehzaad Jiwani and guitarist Cam Graham first discovered the depth of their musical compatibility a little over three years ago, when the two attempted to flesh out a handful of Jiwani's thrashing songs. According Jiwani, Greys weren't a real band until Braeden Craig joined - not two weeks later they were already recording their first EP Easy Listening. From there, with the addition of Colin Gillespie, Greys got their feet wet playing small shows, often at the now-closed Buzz hub The Garage, before setting their sights on an expansive tour, early into their tenure.

Six months later, after playing intense shows throughout Toronto "for pretty much nobody," in a restless exhibition of persistence, Greys set out on a North-American tour. Since they'd been playing for nobody locally, it seemed logical that they might as well play for nobody on the road, refining their sound in the process - and it paid off: "people gave a shit more in Toronto after we came back from touring."

Then, in Feb 2013, now with dozens of shows in their pocket, Greys followed Easy Listening with their next EP Drift - a tight 3 track onslaught of heavy, short and sweet screaming rock. That is, except for the final track "Pill," which offers a series of dynamic movements.

Drift provided Greys with some much deserved attention, gradually allowing the band to book shows and tour with much greater ease. "The biggest difference is now people are returning our emails," says Jiwani about their transition into local popularity and acceptance into a scene that grows louder every day. When we first started playing, it seemed like we weren't hearing that kind of music at the time. Now it seems like there's a lot of bands like us. I think we all must've started at around the same time.

The most obvious example would be breakout Toronto thrashers METZ, but currently there are many like-minded bands with whom Greys can share a stellar bill. Shehzaad speaks highly of fellow bands like surinam, Odonis Odonis, HSY, Dilly Dally, Beliefs and while they don't all necessarily sound alike, somehow the current Toronto scene is in a place where even the most diverse acts can share a stage. 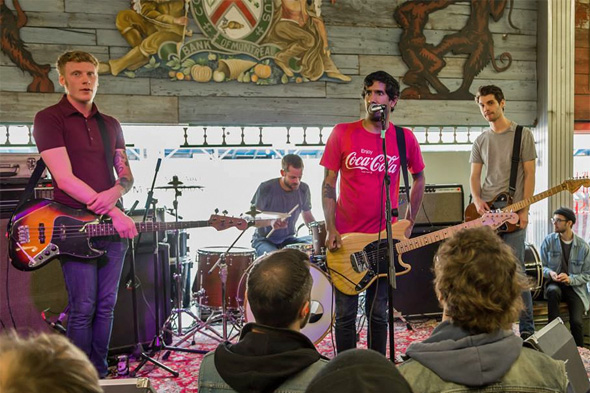 Take, for example, this year's Record Store Day showcase at Sonic Boom, when Greys' heavy-hitting set was followed by the significantly less aggressive band The Bicycles. In many ways, that all of the bands Greys mentions as part of this particular moment sound nothing alike is the most accurate characteristic of any sense of a Toronto scene.

In trying to describe Greys to friends, Fugazi is still an apt reference point in Greys' gifted ability to deliver calculated rolling riffs. If 'math rock' means anything, and surely it must, I imagine this has to do with the intricate timing Greys are able to pull of in short but potent bursts - though Greys are to be played effing loud, the band is not especially fond of terms like noise-rock, preferring instead the broader scope of simply being a loud rock band, which they most certainly are.

Sure, there are elements of mud, grunge, and even traces of sludge at work here, but there are also razor sharp progressions, backing intelligent lyrical credos like "Use Your Delusion." Despite a new song called "Guy Picciotto," Greys have lately been shedding their Fugazi-esque starting point via their upcoming debut LP If Anything, a full length effort that allows Greys to breathe and sink into more than just one type of sound or influence.

SEE THEM / HEAR THEM

They have no Toronto shows currently scheduled as they prepare for their American summer tour in support of the upcoming IS ANYTHING (to be released June 17), but generally Greys are to be found playing local shows in their favourite venues like Soy Bomb, Parts and Labour, The White House, The Garrison, or perhaps at Sonic Boom, sharing the bill with other "loud" Toronto peers like Odonis, Odonis. As the ANYTHING release date nears, it's more than likely that the band have some killer local shows around the corner. In the meantime, you can listen to Greys on Bandcamp.

Writing by Zach Gayne, second photo by Back to Basics Photography via Facebook