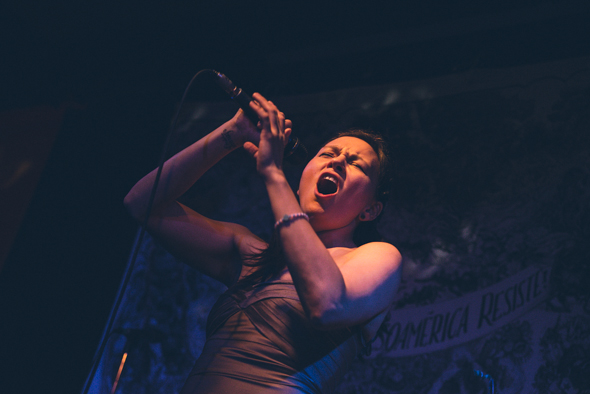 Special guest and Bjork collaborator Tanya Tagaq's unique set merged Inuit throat-singing with contemporary improv. Her voice ran from guttural growls to sensual R&B hooks emphasized by high pitched notes and, eventually, screams. Without using pedals or any outside assistance her voice worked in multiple registers at once - sometimes freeform, sometimes creating rhythms one might hear in a club - culminating in a performance like a Francis Bacon painting come to life as she shrieked "colonizer, colonizer." 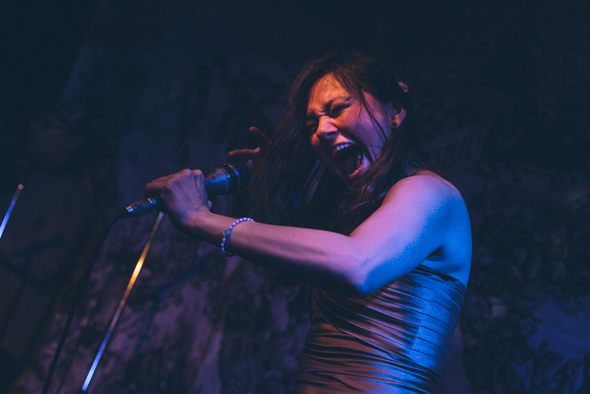 Watching Tagaq perform brings the experience of Colin Stetson's live show to mind: that baffling inability to explain how the sound is being made. While Toronto percussionist Mas Aya was on stage at times, Lido Pimienta's clarinetist Robert Drisdelle occasionally contributed a no-wave tinge, Tagaq's set was as much an immersive happening as it was a concert - the crowd could have been dancing at times, but most just stared in awe. It was impossible not to become overcome with Tagaq's emotion.

Lido Pimienta is making a name for herself in the Canadian music scene as a force who won't back down - this Aux interview is a good primer for what she's up to. The Colombian-born artist's politically-charged pop is as empowering as it is danceable - she's not afraid to to sing "K K K Kanada" on stage. 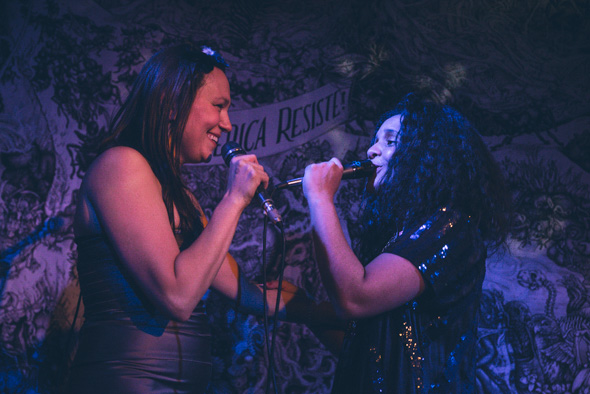 Pimienta's set at Lula was possibly more restrained than that aforementioned Wavelength Fest concert. Her stage banter stayed in the territory of female empowerment, which was brought to life as she was joined on stage by Tagaq and openers Isla Craig, Victoria Cheong (HVY WTR), and Jaca Lynie (Doomsquad). Pimienta's voice often rings with a similar power to Bjork's, and to watch her and Tagaq face each other smiling and dancing was enough to finally get the room moving. It was a unique show that would rarely take place anywhere in the world, and an awareness of this permeated the room with excitement.

Multidisciplinary B R I D G E S also hosted artwork from The Beehive Collective including a stage installation of "Mesoamerica-Resiste," a massive nine-year undertaking by Beehive, who spoke at length about colonialism and violence in the Americas. The night successfully bridged activism and punk ethos with positivity, art, music, and sparkles in a way that's rarely accomplished in North American clubs. If more of these pop up, the kids just might be alright. 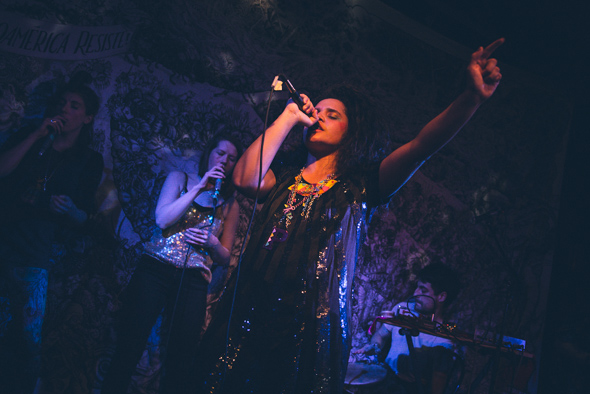 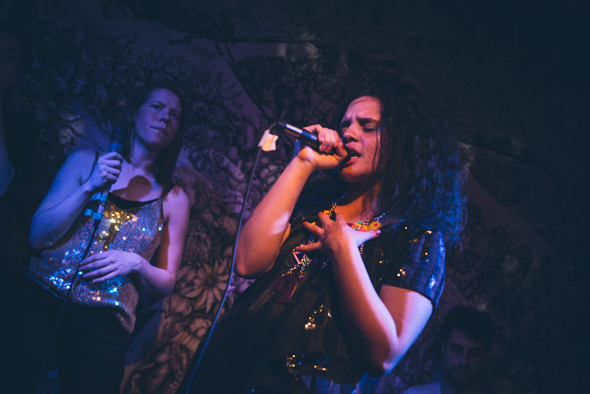 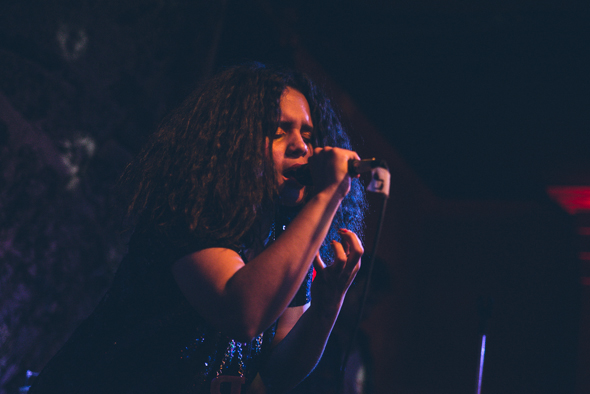 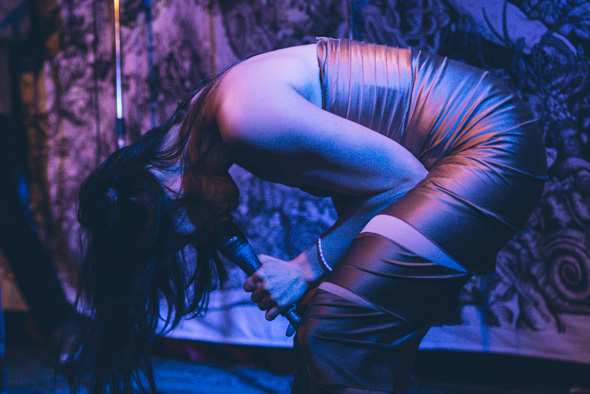 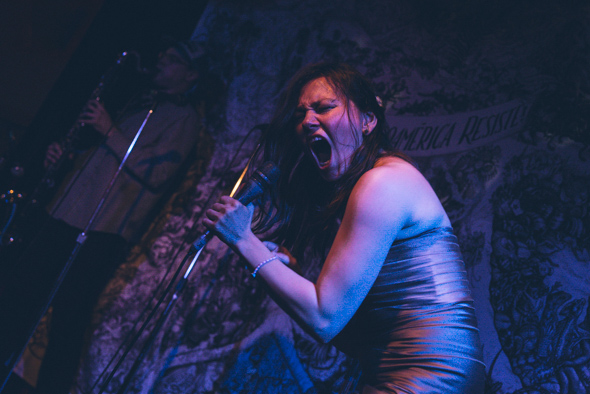 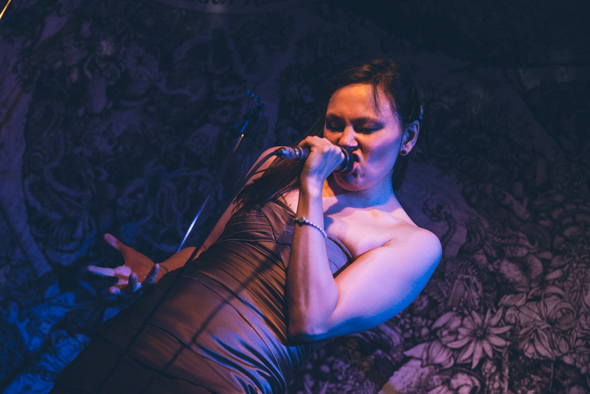 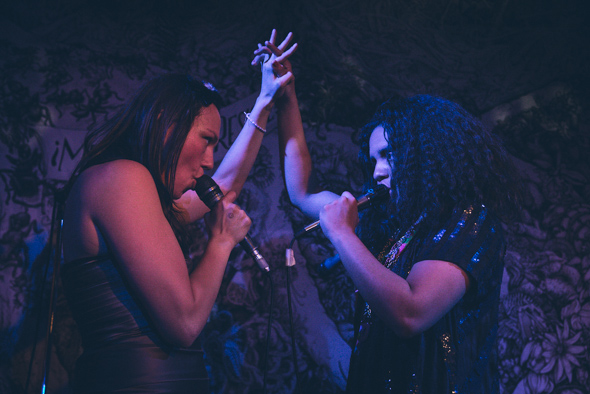 Photos by Alejandro Santiago. Aubrey Jax is on Twitter.