Last Friday night, The Garrison played host the sold-out show for Toronto's punk rock upstarts PUP. As the band is set to embark on their first international tour, the enthusiastic crowd bid them a hometown farewell of epic proportions. You never would have guessed that this was PUP's second show that evening; only a few hours earlier they'd performed as the surprise guest opener for AFI at The Phoenix. Talk about stamina. 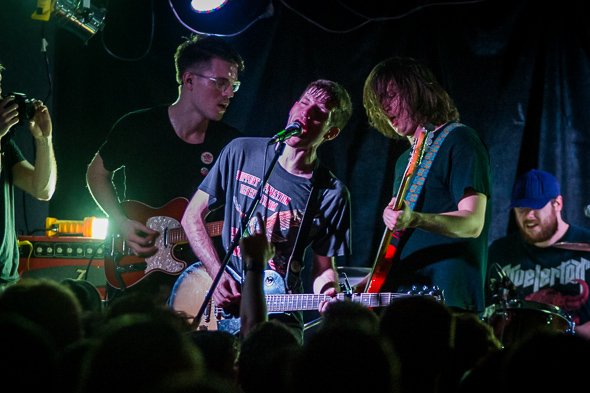 Before the foursome even hit the stage, a "PUP! PUP! PUP!" chant got the rowdiness underway. It was obvious that these people had attended a PUP show before, they knew that one loud and sweaty adrenaline rush was about to get started. When PUP appeared before the crowd, they set things ablaze with "Guilt Trip," the first track on their debut LP. It was only about 10 seconds on the clock before the mosh pit began, and things never slowed down after that. 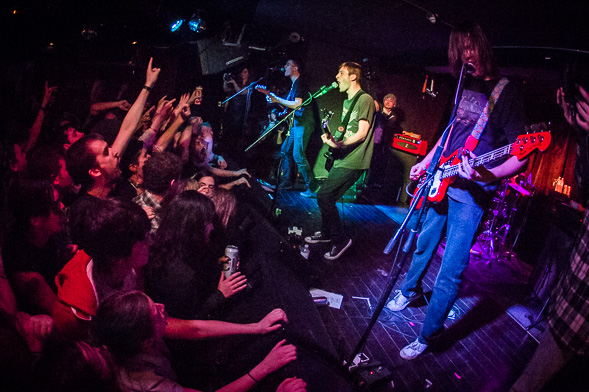 Next came the fast-paced anthem "Back Against the Wall," wherein the feel-good insanity kicked into high gear. When the crowd quickly proved that they knew every lyric, microphones swung outwards, and suddenly the yell-along volume doubled. Right on cue, lead-singer Stephen Babcock did a pledge to Joe Strummer of The Clash, leaning his head back to launch a wad of spit in the air. Off he went, jumping into the crowd, his back supported by helpful fans, who never let his guitar cord tangle, and promptly pushed him back on stage just in time for the next verse. 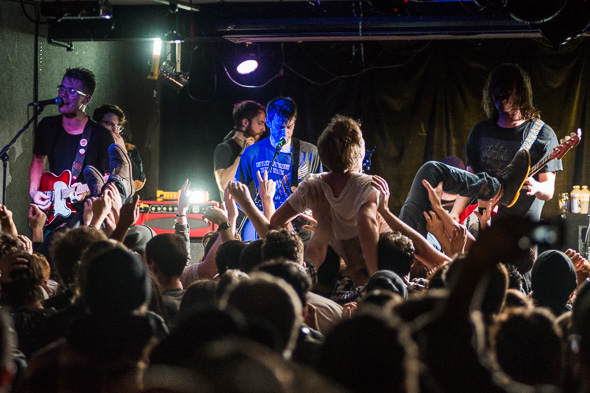 From then on out, it was free game to go as wild as your heart desired. The crowd surfers were professionals, they were living out the glory of their punk rock youth one dive at a time. I've never seen such diving creativity, one crowd surfer's legs swung in the air like he was running on the ceiling, and another dude launched himself off the stage, doing somersaults and corkscrew flips into the impact-absorbing crowd. 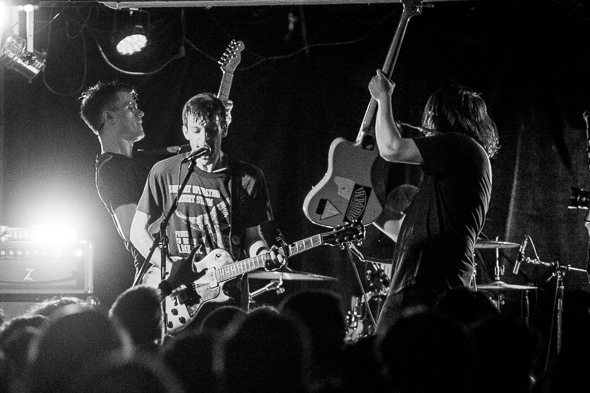 "We just shot a video for this song," Stephen announced, before bursting into the band's first break out single, "Lionheart." This impossibly infectious tune has all of the band's staple sounds. Lots of "woah ohhs," and lightning quick licks that travel through time signature dimensions, but always land on a satisfying downbeat. Over the mics went, toppling into the crowd, turning the entire song into a chanting riot, where you couldn't decipher who was singing, the crowd or the band! 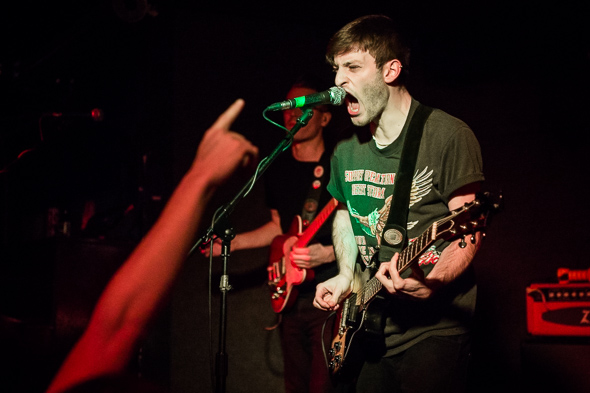 Since they've only released a 10-song LP thus far, they've gotta churn out a few covers to make their set last. "We've played this song a couple times and no one likes it, but this time it will be different" Stephen said, before putting his guitar down and kicking into their cover of Jay Reatard's "My Shadow." This song was not about to fall flat, as the frontman made of by bouncing all over the stage wearing a quintessential scream-rock face, howling into the mic like it were the ears of his worst enemy. 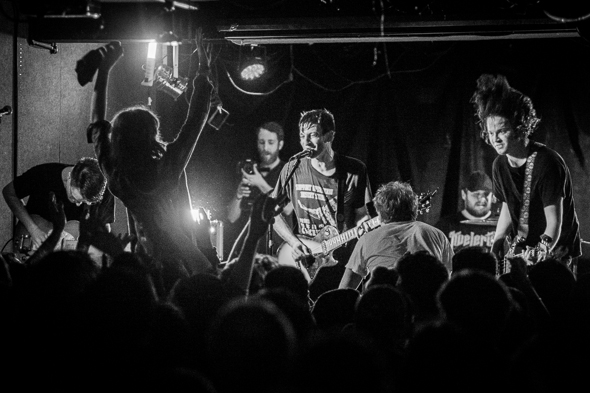 While the whole set had been batshit crazy thus far, it managed to somehow get even more intense during "Reservoir." There were way too many crowd surfers to count, you had to keep an eye out to avoid a Doc Martin clunk to the head. A big leap off the bass drum, and the song came to an end.

For the encore, they gave us two familiar cover songs so we could sweat out the last of the beer we'd consumed. Nestor (bass) and Steve (guitar) switched instruments, and they headed straight into an 80's punk rock classic, "Too Drunk to Fuck" by Dead Kennedys. Stephen strutted around the stage, swinging the mic in big circles, not giving a shit when it hit the ceiling and fell to the floor. And if you didn't recognize that one, chances are the final cover of the Beastie Boys's "Sabotage" registered for pretty much everyone in the crowd. 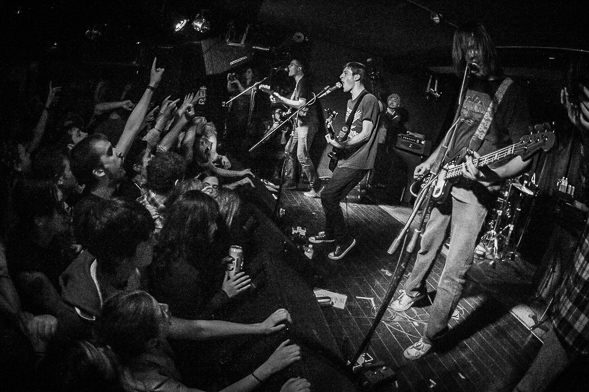 During the hour-long show, the momentum never faltered. All of us had a rambunctious, smug look on our faces, like we were part of some secret PUP club. If this first night of the tour was any indication of things to come, PUP isn't going to be your little back-pocket punk band for much longer. The secret's getting out there, one sweaty mosh pit at a time.