On Friday night the Mod Club was jammed to the brim with hip hop heads ready to soak in the launch of Naturally Born Strangers, a full length record by local icons Rich Kidd, Tona and Adam Bomb. This project was created in collaboration with clothing company TheLegendsLeague and the event included a pop-up shop featuring a new line exclusively available that night. With a blitz of media coverage and sponsors like Noisey and Jameson Whiskey officially on board for the event, the buzz surrounding the show was undeniable. 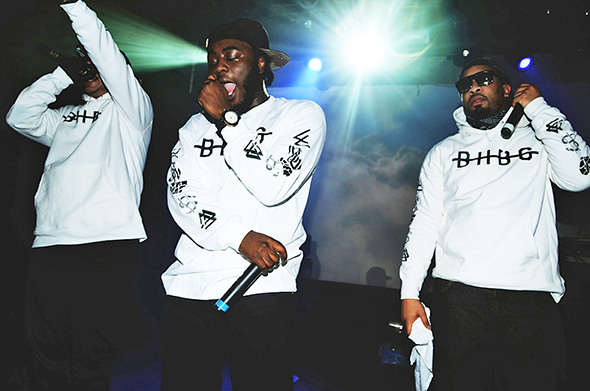 Just after midnight a video clip of Charlie Chaplin's monologue from The Great Dictator was projected onto the stage while dramatic music filled the room. After a couple minutes the visuals transitioned to violent riot footage as a group of men wearing black hoodies, with their faces hidden, walked onto stage. The scene was gloomy and the music was too, as "Buttered Chicken" boomed through the system. Before long the man in the middle stepped forward and revealed his identity to be Rich Kidd with a strong introductory verse. Tona and Adam Bomb would step forward similarly to showcase their raps before the track culminated into a hype moshpit-esque display on stage. 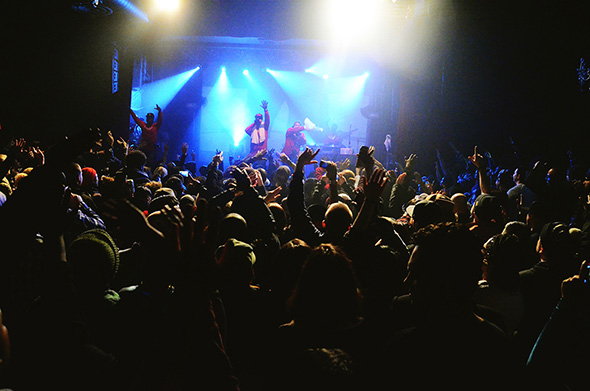 The rest of the performance included more dramatic transitions of projected videos, which conveniently allowed time for wardrobe changes so the performers could give some shine to different pieces from TheLegendsLeague collection. Standout tracks included "A Gun and A Pack of Sandwiches," "Tie Breaker," "Jim Morrison," and of course "Jameson Avenue," which was lined up with a crowd pleasing video montage of Rob Ford mishaps. Aside from some minor sound issues during the first part of the set, which unfortunately took away from the power of some choice verses, the Naturally Born Strangers put on a compelling show.

One thing undeniably apparent throughout the entire evening was the level of passion for the project from all members of this collective. After speaking with Bryan Espiritu, designer and owner of TheLegendsLeague, he explained that the concept developed rather naturally. Espiritu is also credited as an executive producer on the album for providing creative direction and inspirational input. 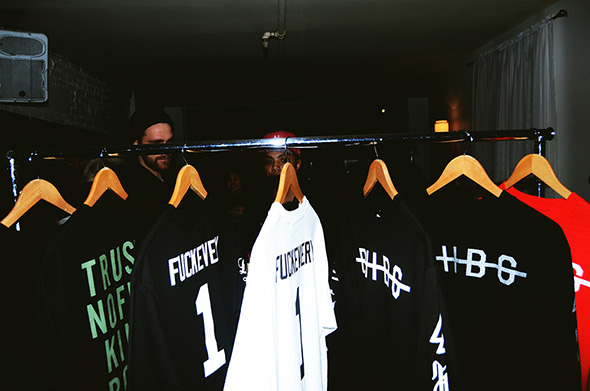 All three veteran rappers easily command attention on the record, while Rich Kidd's gritty production style and modern sample selection ties it all together. The same dynamic was apparent on stage and it was evident that everyone involved had a certain level of mutual respect for one another's drive and creative abilities.