The Cult's Ian Astbury isn't one to mince words. Moments after bursting on stage with his band at Danforth Music Hall Saturday night to the bombastic beats of their hit single Wildflower, he shouted out "Rob Fucking Ford!" After the third song, he belted out "Hey, Toronto! Is that all ya got?" after a typical polite Toronto welcome, adding, "We're not dead yet!" 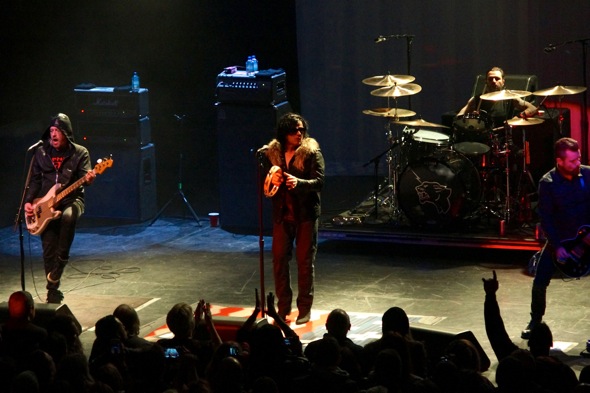 Astbury and company do have a bit of a love-in for Toronto, having played here numerous times over The Cult's 30-year career. This show was an electric one, largely playing most of their 1987 album _Electric_, including Love Removal Machine, "Lil Devil," and even its b-side "Zap City."

Despite an announced 8pm doors and 9 o'clock showtime, the band didn't hit the stage until 9:45. That gave the sold-out crowd extra time to get a few more beers in them. A look around me and I immediately felt like the youngest guy in the audience - groups of aging rockers in their mid-to-late-40s and an assortment of hosers. The crowd perked up considerably when "Love Removal Machine" began, as a huge skull-and-crossbones was projected on the screen above the stage. 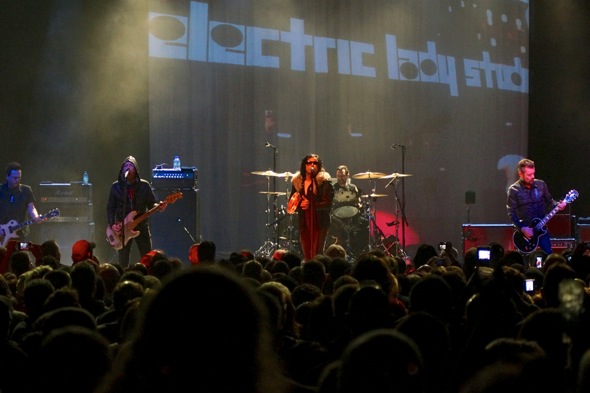 Astbury played well to the crowd, swaggering about the stage in his cowboy boots, black jacket with fur trim and ever-present shades. He'd often pace in circles, wielding his tambourine like a weapon, shaking it with ferocity. Fans threw up the devil's horns during the guitar solo.

Others in the audience were more into themselves. The dude next to me had to make a nuisance of himself and annoy all those around him by recording the entire song on his iPhone. With the flash on full blast the entire time. While his friends all took turns making fools of themselves on camera. Astbury appeared impatient with the Toronto audience, who weren't giving him enough love. "I'm waiting for you, Toronto!" he shouted out, about 45 minutes into the set. Was this simply to boost his ego or was he craving more validation from his fans?

"Rob Ford!" exclaimed Astbury, later on in the set. "All of America's laughing at you!" which drew a few chuckles from the crowd. "But what do they know? They've got their own problems." 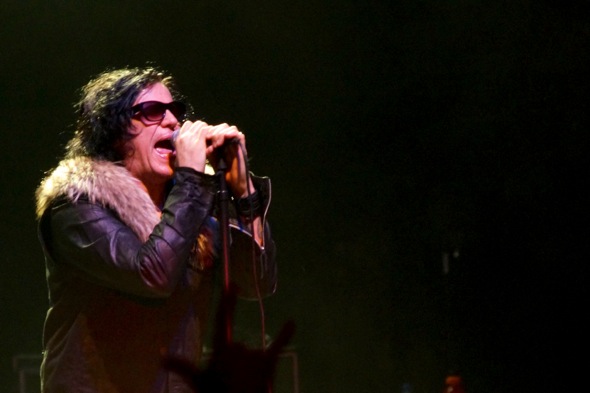 Suddenly it was break time. Apparently, there's a rule for bands performing in Canada, Astbury explained, where if there's no Canadian on stage, there's got to be an intermission. Perhaps this was created so that bands would slot in a local support act. "Go drink some beer!" said Astbury. "We're gonna jerk off back here," before heading backstage. Charming.

For those who stuck around, there was a video projection of their song "Elemental Light" from 2012's _Choice of Weapon_ album. It was almost 11pm when they came back, kicking right into Rain. Lots of energy, but the harmonies were way off key. Maybe a little too much partying?

For the encore, The Cult started off with "Spirit Walker." Astbury blurted out, Larry's Hideaway! ... The El Mocambo!" as the song began. To introduce "Sun King," he mentioned the Idle No More movement, giving a shout out to all the First Nations people. "Show us the way!"

Missed them this time? Not to worry. The Cult will play again on Tuesday, December 10 at the Living Arts Centre in Mississauga.