Gwar gets bloody at The Phoenix (and hails Rob Ford)

One thing a Gwar show never lacks is fluid. These scum-dog aliens are really fond of their blood, pus, semen, and general spew-y type liquids, and they also like to share them. All over you. Last night, The Phoenix got a dose of Gwar. 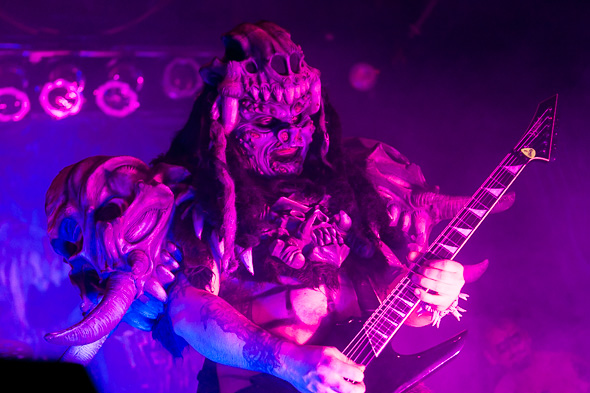 The uninitiated should know that this metal band bases their costumes, props, and storyline on a mythos: they were chaos warriors roaming the galaxy until they were banished to Earth and stuck in the icecaps. Once global warming freed them (which is only the start of their political commentary), they emerged to dominate the planet.

Upon the release of their most recent album Battle Maximus, Gwar's been ravaging city upon city, wreaking havoc on various stages across North America. They brought their battle axes to Toronto Tuesday night, ready to make war with only the fiendest of foes - no, not Rob Ford. Their roster of blood-filled cameos included the Pope, the Queen of England, Justin Bieber, and a number of rather haggard monsters - political and satirical dummies they would hold up and disembowel throughout the show (to a very emulsifying effect). 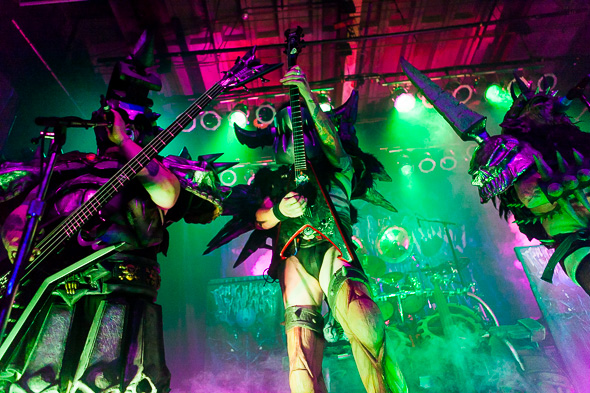 If you've ever seen Gwar, you know what to expect: costumes, pirates, swords, raincoats (yes, I saw some genius woman wearing one of those rain sacks), burly men, long beards. You can definitely count on being rained on by coloured water - sorry, I mean blood - and probably some otherworldly "semen." 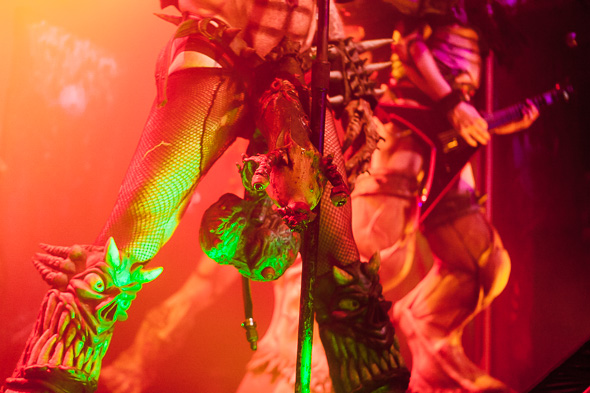 Last night Gwar delivered on all of these things, and their showmanship didn't flag. They made reference to our media darling of a mayor yelling "Long Live Rob Ford" at the end of their set before the encore, and kept the pace of the show quick and the energy high. The songs were a mix of old and new - some from their most recent album, other popular songs from a few years back ("Hate Love Songs"), and even others that dated back to some of their first albums (Oderus Urungus lovingly announced: "Here's to you old motherfuckers who never thought you'd hear this song live," when they played "Preschool Prostitute"). 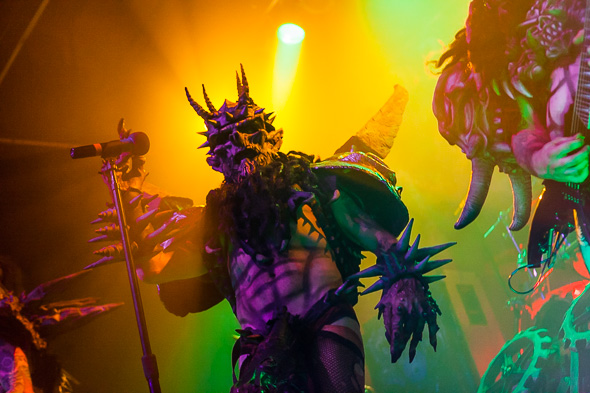 Despite the disembowelment of Justin Bieber, the strangling of the Queen (by the new baby's umbilical cord), and the general dismemberment of many monsters, Gwar's most notable act was during the encore, as they played a cover of Billy Ocean's "Get out of My Dreams (and into My Car)" and fed young women into a pit in the middle of the stage. If you're dying to hear their rendition of that song, you can do so here, as well as the extra treat they played just after. 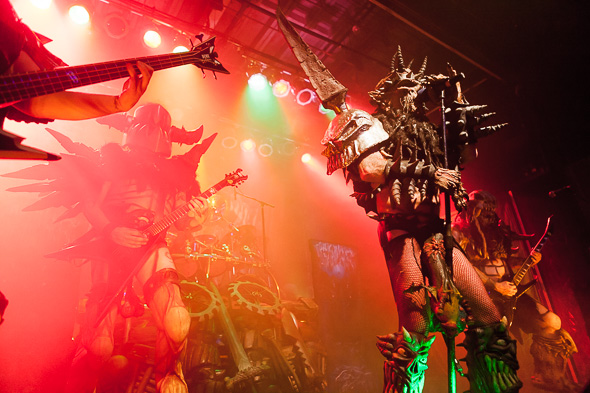 Although I found my hair dripping and my shirt completely soaked (not to mention my face and hands dyed red and blue), I left that messy metal show smiling. They may be scum-dogs but they sure know how to spew the right music into your ears. 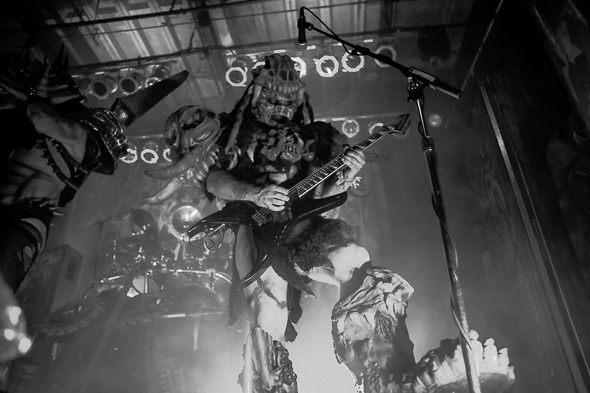 PS - If you'd like to see a Gwar show happen on an even larger scale, check out this petition to get them on the halftime show during the 2015 Superbowl. Yes. This is a thing. 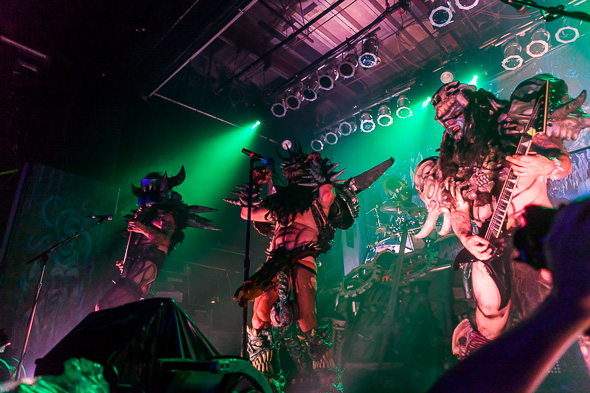 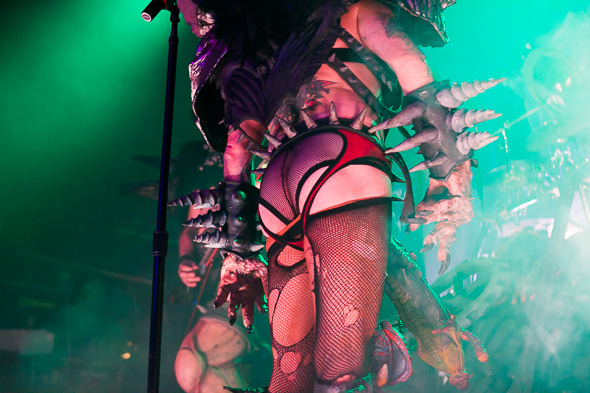 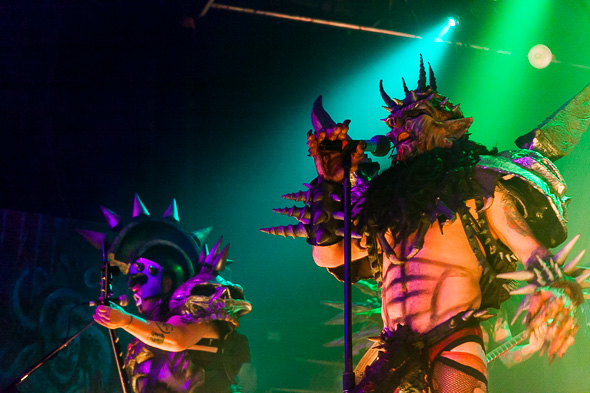 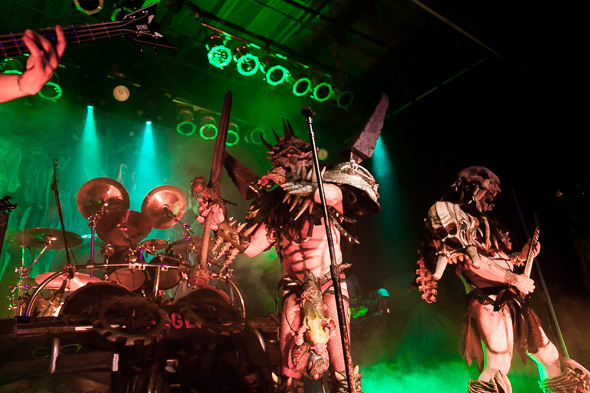