5 reasons to have Healing Power Records on your radar

Healing Power Records, founded in 2008, still feels like Toronto's best kept secret. Label owners Wolfgang Nessel and Victoria Cheong are so chill that Healing Power and their spaced our blogspot page can be easy to overlook in a city with a thriving, multi-faceted, internet savvy DIY label scene, but because the two are actually working overtime putting out tapes, LPs, CDs and digital releases for some of Toronto's most groundbreaking up and coming artists — plus promoting gigs, making art, and playing in their own band — you might already be a fan and not know it.

Here are 5 reasons this thriving underground label should already be on your radar.

The pulse of the underground

While most of their releases can be called psychedelic or at least experimental, Nessel and Cheong are reluctant to name drop genres in relation to Healing Power. They describe their tight-knit community as being eclectic and made up of artists who push boundaries and don't feel limited by traditional genres or categories. "New music," Cheong simplifies. Visual artist and film maker Cheong carefully curates the visual aspects of all releases, working with local artists like Laura McCoy, Sandy Plotnikoff, and Alex MacKenzie to give each tape, LP, or CD its own special pulse. In 2013 their releases have included Petra Glynt's Of This Land EP, Colin Fisher, and Pachamama, plus two massive Toronto CD compilations: Fruits, a collection of female Toronto performers, and Heart of Toronto, a local underground dance music odyssey. 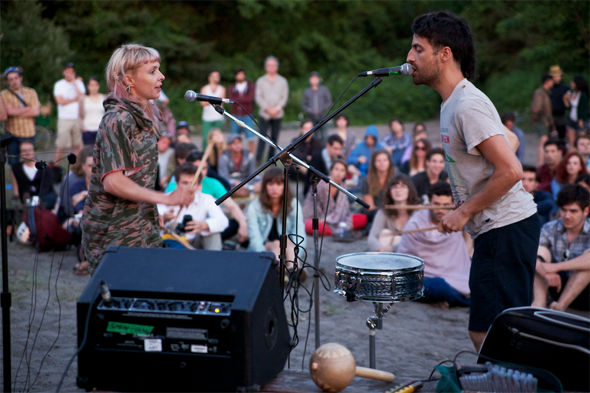 A gateway to new music

Like many small labels in Toronto, Healing Power host live shows and parties, working with both local acts and touring artists such as LA Vampires and ITAL. When I ask if the label books bands because they want to or because they have to, Nessel immediately indicates the former. Cheong speaks glowingly about Toronto's music scene. "Every time a show comes to town everybody shares the work." "It's good that it's not just one person putting on all the shows," Nessel adds. While commonly found holding down Double Double Land and The Tranzac, Healing Power have also presented artists everywhere from The Drake Underground to public parks. Their next show is this Friday, when Tokyo electronic artist Sapphire Slows (Not Not Fun / 100% Silk) will fly in from Japan to play Double Double Land.

The smooth sounds of HVYWTR

Moody HVYWTR is Nessel and Cheong's own musical project. The duo started as an audio/visual experience with Cheong providing video, until their band with Isla Craig, experimental R&B group The Deeep, went on hiatus. Now Cheong's vocal contributions have become essential to HVYWTR's sound, and having opened for acts like ITAL, they're a rising voice in Toronto's electronic scene.

If you haven't heard Heart of Toronto, you're more than missing out. The Toronto-only, boundary-pushing underground dance compilation is full of gems and new music crushes. To launch the Heart of Toronto CD, Healing Power hosted a dance party at Double Double Land earlier this fall which went so well they now plan to turn it into a series. "We invited all the artists [on the comp] to come play live or DJ their own music," Cheong recalls. "Some music needs more of a party vibe instead of a live show. We didn't perceive how needed it was until we did it."

They're in it for the love

Healing Power is a hobby for Nessel and Cheong, if an obsessive one. "We just keep putting stuff out until we're really, really broke," Cheong laughs. Physical releases can run from between 100 - 300 copies, be it CDs, cassettes, or LPs. Before each release, they determine which formats will work best on a case by case basis — it's the art that comes first with Healing Power, which explains the eclectic and diverse visual aesthetics of their catalog, which will undoubtedly keeps growing as releases become more elaborate. Nessel tells me they hope to break out more in the USA and Europe, and adds he's looking forward to Weird Canada's distro which launches in 2014. Music wise, fans can watch out for releases from Guy Dallas, Skull Bong, Tenderness, Bile Sister, a Petra Glynt LP, and a The Deeep remix tape. 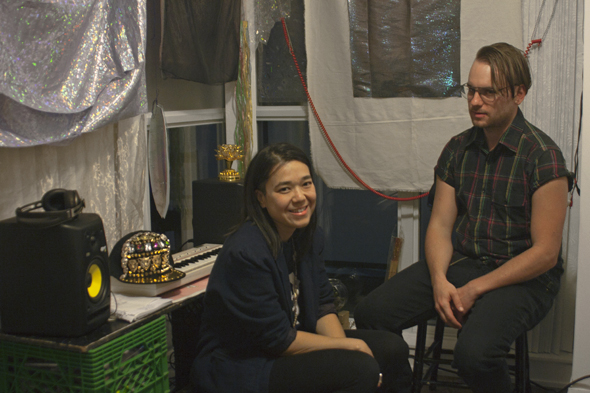 TO artist you'd most love to work with?: Sandro Perri

Catch Healing Power Records in action this Friday at Double Double Land as they present Tokyo electronic artist Sapphire Slows. HVY WTR and (newly re-formed) The Deeep are opening, and he night will feature installations by Jeff Garcia.