Rush singer pleads to save Sam the Record Man sign

Geddy Lee's singing voice may be high but the Rush frontman apparently speaks like an ordinary guy, and he has something to say about Ryerson University's impending failure to reinstate the iconic Sam the Record Man sign as promised.

A letter the singer wrote to City Hall late last week has surfaced via the SOS: Save our Sam Facebook page, in which Lee is clearly super bummed about Toronto's loss of Sam the Record Man, and pleads with the city to take up the case of the historic neon sign on behalf of Toronto's cultural landscape. 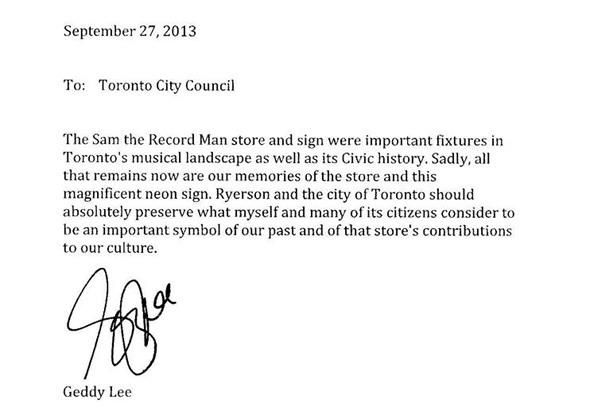 It's a touching gesture from one of the city's cultural icons who rose to prominence during a time when Sam's signs burned at their most bright, but who knows if it'll have any influence on the final vote at city council. While it looks like an array of problems will prevent the sign from staying, public outcry has been intense, and the 4479 coalition is also on board. You can get involved (or watch the drama) via the SOS Facebook page.