SlowPitch is Cheldon Paterson, a DJ-turned-turntable artist, instructor at east end DJ school Off Centre, and lover of sci-fi who moved to Toronto from Grenada when he was four years old. He currently lives in the city's west end, where he's been crafting his sound and vision full time.

SlowPitch has been around for about three years and is Paterson's newest musical endeavor: he's also a member of turntable band iNSiDEaMiND, and has performed in the past as DJ Vision, Professor Fingers, and ProEf. After trying as ProEf to create a more portable setup, sans turntable, Paterson recognized the importance of having something special on stage and committed himself to exploring any new realms his turntable could conjure. With that, SlowPitch was born.

Paterson's since collaborated with filmmakers and video artists (most recently at TV Party), instrumentalists, dancer and spoken word artists — though he still hungers to soundtrack more futuristic fantasy films and visual mappings. 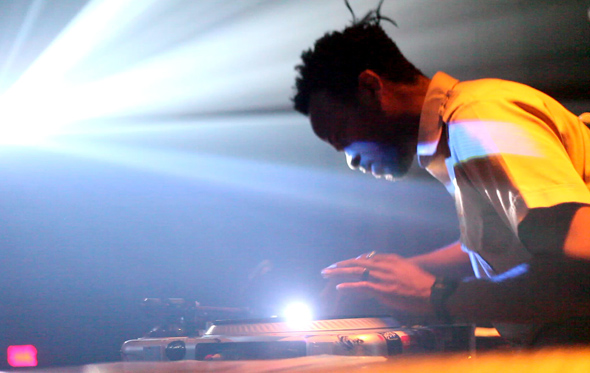 A sci-fi odyssey — but more on that in a minute.

One of the forces behind SlowPitch's success is his versatility. He names out-there acts like Kid Koala, John Cage, Birdie Nam Nam, DJ Krush, and Bjork as influences.

Working with both deep-creeping drones and slow building rhythms to suit his sound to his environment, Paterson uses a special, more versatile turntable called a Vestax, which allows him to slow his sound down by 50 per cent, together with a KAOSS pad, MPC, mixer, and little else.

Paterson doesn't ever just press play on his records, and sometimes there's no record on the turntable at all. With the EQ high, he'll work with the vibration of the table itself to create beats, or (don't let your parents read this) touching the needle-head itself to create bass sounds which lend themselves to the cinematic narratives he imagines.

I asked Paterson what's going on visually in his brain when he plays.

"Fantasy science fiction, future stuff, what the world could turn into, crazy future technologies, interesting creatures: I like that because I feel like my sound evokes those kinds of visions. Some sounds I'm creating are new sounds — sounds that aren't heard — and I imagine a strange world that is alive and moving and unpredictable. I'm inspired thinking about other worlds; it helps me to make my music. Building sound-scapes to go with images imagined." 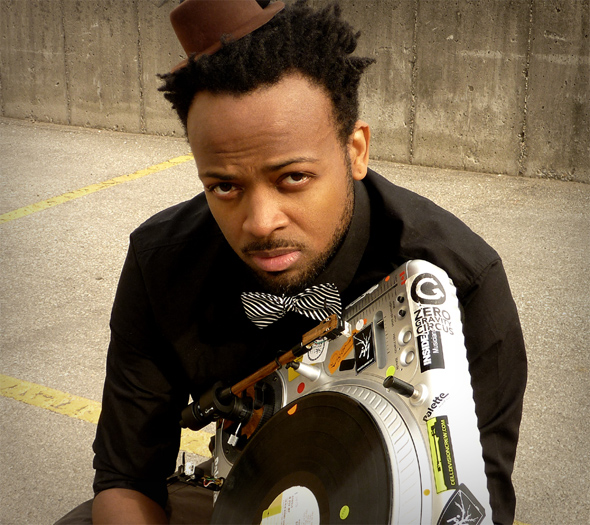 Hear him / see him

SlowPitch keeps busy: he's played one shots in Sweden and London, appeared in Toronto at the Images Festival alongside Tim Hecker debuting Emoralis (an audio/visual performance he spent the winter perfecting), and just returned from Montreal's Mutek festival.

You can see him this Saturday at BLK BOX opening up for experimental UK techno artist Actress, where Paterson promises not an ordinary set but something he calls an "adventure soundtrack".

"I like to challenge people with sets, not just playing but challenging. I have mixes on Soundcloud with talking in between, like sci-fi inspired imaginary stories: experiments, and segues. It will be fun: some noise and experimentation, and some beats. There will be visuals too."

SlowPitch will also be performing Emoralis at the upcoming Sound In Motion festival, and will release an album, also titled Emoralis, on Montreal's Phonosaurus Records soon. From dark lofts, clubs, and cinemas to galleries and festivals, who knows where else SlowPitch is going to show up. Channel your inner Agent Mulder and keep your eyes on the sky.