Summer 1998 was a time in Toronto's history when our town was a mecca on the North American party map. Hordes of loved-up music fans would flock from all over the continent to experience up to 5,000-strong warehouse parties that fell just short of escaping the mass-media lens. Techno, House, Hardcore and other genres were often lumped together but, more often than not, Jungle/Drum & Bass events stood their own ground, segregated from the typical 'ravey' sounds accompanied by beaded necklaces, fun fur phat pants and the soother crowd.

Junglists at the time were more like soldier-like, decked in camo, 90s street wear like Fubu, Phat Farm and an unusual dose of Tommy Hilfiger and Titleist golf apparel. Heavy with rap and reggae samples, the sound spoke more to the urban audience that was tired of commercial hip hop. While Toronto's glory days have passed, many heroes of the scene are still active like Kenny Ken, Shy FX, Nicky Blackmarket, Andy C, Toronto's Marcus Visionary, while some like the near-messianic MC Stevie "Hyper" D met with untimely deaths. 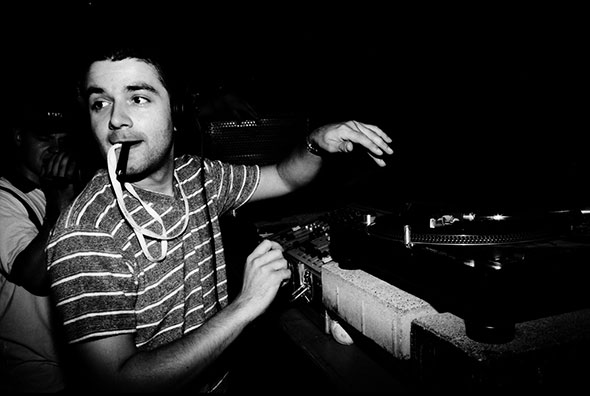 Enter Dayv Mattt, street photographer and former non-committed metalhead who, like many, found himself almost by accident at one of these events in 1995. He felt a strong connection and instantly immersed himself in the world of amen breaks, ganja, and the power of Jah! Matt has published his e-book of Toronto memories Rewind: Toronto's Jungle Scene In The Late 90s as a sort of time capsule. Mattt currently resides in Colombo, Sri Lanka as a house-husband, and has also published HIGH STREET LOW STREET: Seoul Street Photography. I recently caught up with him to chat about his latest project. 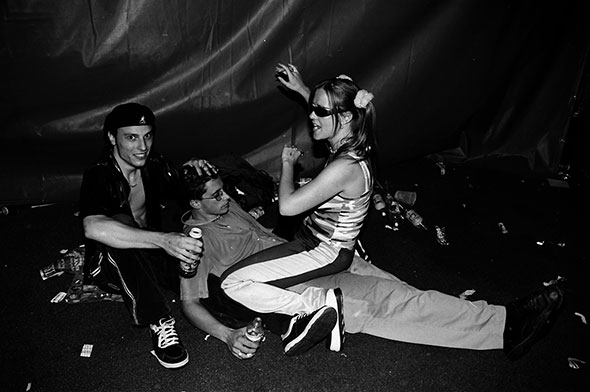 Toronto's Drum & Bass scene reached its peak between 1998-2000. What do you think contributed to Toronto being the North American capital for the music?

I didn't start partying until late 1995, and by that time Toronto was already a really well established scene, and while I agree that the DnB scene reached its peak between 1998-2000, that's only in terms of the size and frequency of all-ages parties. The only thing that really disappeared from the scene was the all-ages aspect. Top tier DJs and MCs were still brought to Toronto, but they played licensed events to an older crowd.

What did we have to offer that no other city could?

I would argue that Toronto had a lucky mix of people genuinely eager to put on good shows, a population that was open to new forms of music, and a steady supply of people travelling between the UK and Toronto (Dr. No, for example). 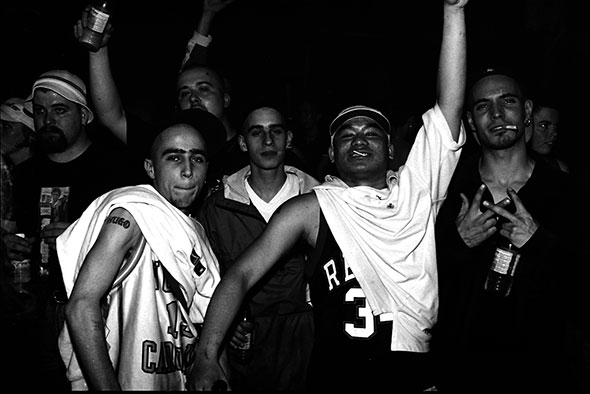 What appealed to you about the scene, especially coming from a metal background?

Growing up, I wasn't ever really into music. Listening to metal was more a product of me just listening to what my neighborhood friends were listening to. I wasn't passionate about metal at all, though I probably acted like I was. I never went to concerts or shows because I just didn't think slam dancing and head banging were cool. The angsty violence of that scene didn't really resonate with me. My first Jungle party in 1995 resonated with me, and from then on I was at home listening to Jungle in a warehouse with other like-minded and often very kind people on the weekend. 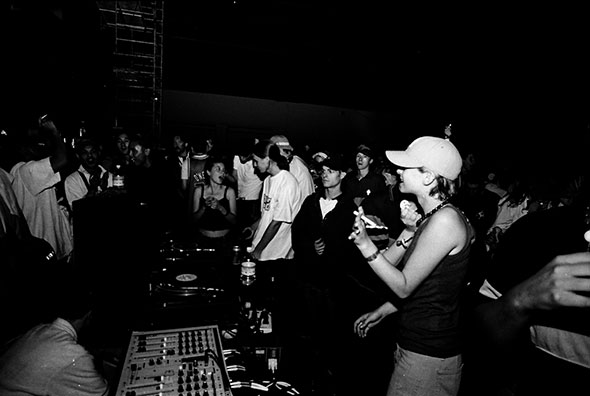 What made you focus on the 98-00 period? Was that when you got more involved in photography or is there more to the story?

I started shooting at parties in 1996, but over the years, a significant number of negatives have either been lost or destroyed. There was a fire at my house and what wasn't destroyed was packed up by the insurance company and brought back later in haphazardly packed boxes. When I finally sorted through everything with the intention of further organizing a giant pile of negatives and prints, it became evident that I was missing a considerable amount of photography. For instance, that color photo of Stevie Hyper D is actually a scan of a print. I don't have the negative anymore. Negatives and prints for the years in the book are all that survived, I'm afraid. If I had more, I would have increased the scope. 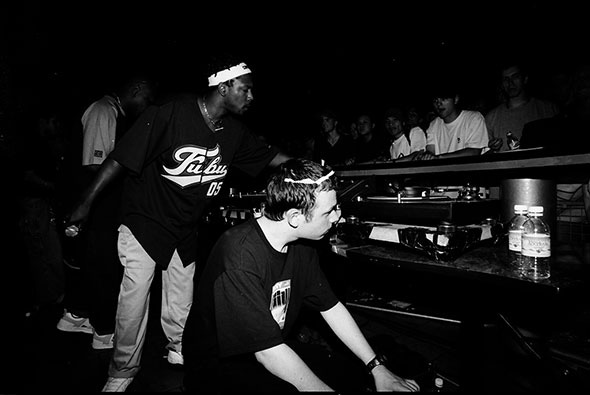 Were you ever nervous about bringing a high-end camera to a party?

No. I never gave bringing my camera a second thought. There was nothing to worry about. Gangbangers didn't really start appearing until 1999, and even then, they weren't really causing any problems. Additionally, by that time I was getting pretty bored of techstep and the number of parties I attended decreased significantly.

What were some of your favourite memories from that period?

Like I mention in the book, I didn't embrace drugs so much at the shows. I'd smoke a few joints, but that was about it. I wanted to be capable of shooting, and so when I'd take breaks and sit on a stack or ledge somewhere, it was remarkable how many people would come up to me and ask me if I was having a good time. Crowds generally looked out for each other, and there was a sense of community. It was awesome, really.

Nevertheless, thinking back, my fondest memories were driving home after parties listening to Jazz. Jazz was an essential component of my end-of-night routine as my ears were seriously ringing after each show. I was a bit of a stack hugger. 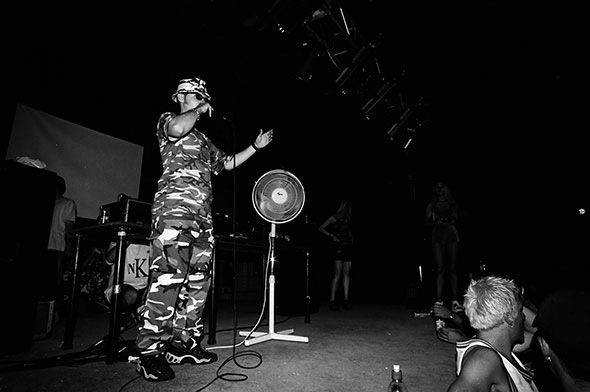 Why did you choose to shoot in black and white rather than colour?

I shot some colour, but colour was expensive to develop. I had a darkroom at home, so shooting black and white was more cost effective. I shot because it was fun. I didn't make many prints, and I didn't show very many people my work. I just did it because I liked shooting at parties. I loved Jungle, but I didn't dance and I didn't really have a big posse of friends who liked Jungle enough to go to parties. The camera gave me a reason to be there.

You say this in the intro of your book: "Today, the kids think raves are Swedish House Mafia concerts at an arena with numbered seating." What are your thoughts on mass market EDM? Is there something missing?

There is nothing wrong with mass-market dance music; I listen to some of it. I'm not sure anything is missing. They did the math, and having concerts at arenas with numbered seating is the most profitable/cost effective for them. There's really no better way to keep a crowd of thousands in check than to give everyone an individual seat. The problem is though, that kids, and a lot of adults today, don't have a clue what the scene WAS like. Their impressions are based on what they see in movies and on TV. What they think is often a terrible stereotype or wrong. REWIND tries to remind those who were there what they'd taken part in, and show those who weren't what they missed.

The author is currently offering blogTO readers a 25% discount on the purchase of Rewind: Toronto's Jungle Scene In The Late 90s using the code: "blogTOmassivebigup".