Nick Cave and the Bad Seeds are like the Quentin Tarantino of pop music. So to see them live on a dimly lit stage provided an extra dash of eeriness to the experience. The iconic neon Massey Hall sign was out (for Earth Hour) when Cave took to the stage. Perhaps this contributed to the ominous tone last Saturday night during Canadian Music Week's most anticipated shows. 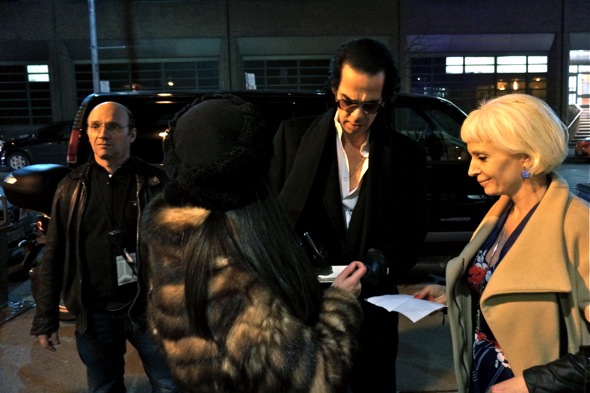 Just as I arrived at Massey Hall, so did Nick Cave, who was gracious enough to provide a quick autograph to an awaiting fan.

Once the house lights dimmed, the excitement mounted to the sounds of "We No Who U R," which also starts off their latest album, Push the Sky Away.

Some concertgoers rushed to the front of the stage early on, putting the ushers on alert. But Cave coolly commanded, "I think if people want to come down, it's okay." Before too long, hordes of cellphone-wielding fans began capturing the digital moment a little too close and too frequently for comfort. The entire orchestra level were on their feet and remained so the entire show. 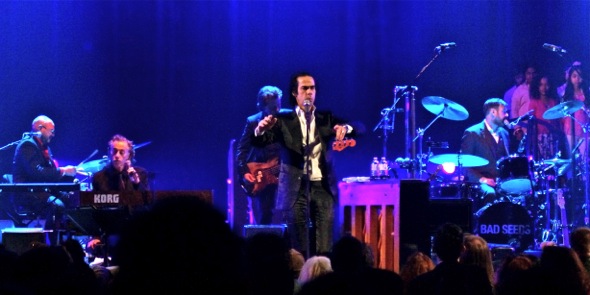 I was surprised to see the band joined by a choir made up of about 20 grade 5 and 6 kids from Rose Avenue Public School (made possible via Inner City Angels. They seemed fidgety at first, but settled in after Nick Cave looked their way with a "You alright, kids?" early on.

They were, thankfully, ushered offstage before the band launched into some of their lyrically age-inappropriate songs. However, they may have caught an f-bomb when Cave chided a snap-happy fan in the middle of Higgs Boson Blues with "Take one more fucking photograph!" his finger pointing right down at him with rage. 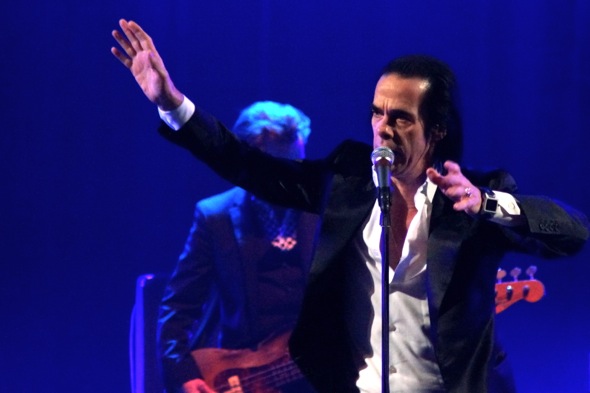 Cave glided about the stage, his lanky frame bursting out of a tailored, shiny black suit and crisp white shirt, unbuttoned to his sternum. He channeled his rage through a few familiar tunes, kicking things up a notch with a 1-2 punch of "From Her to Eternity" and "Red Right Hand." He reached out to the audience at one point, grabbing outstretched hands as he sung "Can you feel my heartbeat," as sweat poured down his furrowed brow.

Guitarist/flutist Warren Ellis was like Paganini on stage, abusing his violin bow to shreds. Also joining the band was a 5-piece string section that included Owen Pallett and at least a couple of members of Godspeed you Black Emperor.

The 15-song set ended with "Stagger Lee." I'm sure I wasn't the only one blown away by Cave's visceral delivery. The night was topped off with a two-song encore of "Push the Sky Away" and "Tupelo," the crowd still on their feet, likely both exhausted and exuberant from the memorable concert experience.