Thirteen doesn't always have to constitute bad luck. Making a good case for the opposite, tonight marks the official start of Wavelength THIRTEEN, 2013's installment of the local collective's annual music and arts festival. It's four days of celebrating the bounty of bands worth checking out all over our fine city, curated by our favourite weekly-turned-sporadic music series. 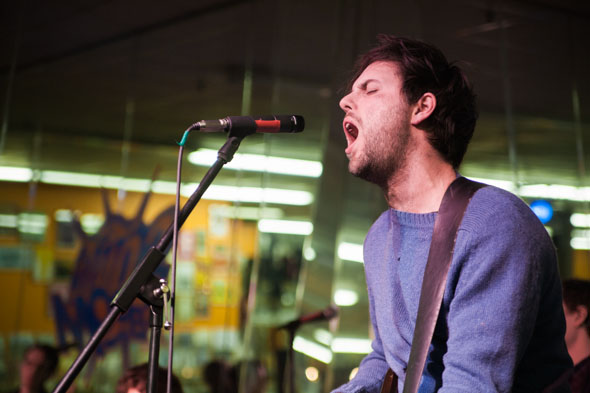 This year, WL13 sees the usually eclectic nightly music lineups augmented with a host of all-ages options, most of which involve a greater emphasis on music discussion whilst taking place at a number of our city's fine record stores. That was how proceedings kicked off last night at Sonic Boom, with great sets by a couple of Toronto's best new(ish) bands, Dusted and Absolutely Free.

The two groups charmed a good sized crowd, with both taking the opportunity to pay very warranted lip service to Wavelength for "hosting all of our bands," as Absolutely Free's Matt King put it. That band's manic kraut-inspired sound managed to buoy energy in the room until Dusted provided a tuneful, airy comedown, albeit replete with some fuzzy riffs. In the context of Wavelength, the somewhat sonically disparate pairing made perfect sense, and the vibe in Sonic Boom was cozy and comfortable as a result.

The festival proper begins tonight at Parts & Labour, with a stacked lineup featuring Lullabye Arkestra, Ell V Gore, and more. Individual tickets for each night's events are available at Rotate This and Soundscapes, as well as online at Ticketfly (with the exception of Night 3, which is sold out in stores and now only available online). Full details for the festival here.

I recently spoke with Wavelength co-founder Jonathan Bunce, otherwise known as Jonny Dovercourt, about how the annual festival retains its past with an eye firmly fixed on the future.

How does WL13 differ from or expand upon previous Wavelength festivals?

Well, with the naming criteria, we have to take it one higher. We were lucky enough to start with year zero in 2000, and so there's this inherent notion in the name that we're just sort of raising the bar a little bit every year. This year we've got some really great headliners, but across the board, it's a really strong lineup. We've got Do Make Say Think, Evening Hymns, Doldrums, Cadence Weapon. Cookie Duster are playing their live debut for this version of the band - they did do shows back in the day, but only four. Lullabye Arkestra are back too.

It follows the formula of previous years, but there's more - so many things happening around the mainstage shows. The instore series, more daytime programming, more free programming, more all-ages programming. There's also some more visual arts stuff around the festival, an installation by Adrian Dilena at the Great Hall on Saturday, live visuals by Live Action Fezz accompanying Doldrums' set, which will be a big surprise I don't want to give away just yet. Some visuals with Evening Hymns' set as well, and live burlesque with Legato Vipers' set on Sunday.

So there's just a greater multi-arts component to it. It's a music festival, but there's way more than just those shows happening, which elevates it on that level.

What elements of the weekly series are still present with each annual festival?

I don't really think too much has changed, and the only differences are in format. It's not weekly on Sundays anymore, but it's the same community of people still. The current crew has evolved from that, people with the ethos of openness and accessibility, a celebration of our heritage at the same time as looking forward for innovation and originality. That's what still drives it, how it's succeeded and stayed relevant by staying true to its roots. We never sold out. [laughs]. And I don't know how we could, in a way. There would have to be some weird, hostile takeover with someone deciding to make Wavelength into a commercial promoter...

And there are a bunch of factors that create the Wavelength vibe - the visuals by General Chaos, friendly people at the door, the absence of any harsh security presence... hopefully cheap drink prices too. Rarely, if ever, hosting in a venue with a higher than 500 person capacity.

And it's still a lot of the founding crew onboard, right?

And lots of newer people, too, who have only been part of the collective for a couple years, but who just get what it's about. It's the community vibe that people really respond to, and recognizing when something is or isn't a Wavelength.

Looking over this year's lineup, it looks like most acts are from Toronto, or surrounding areas. With the original weekly series, it seemed not only focused on the local aspect, but also in helping out bands who are trekking through town and might have trouble getting a gig, especially on a Sunday night. How is that still important with regards to the annual festival?

It's still really important; it's just a little harder to coordinate. We view the series as having a definite national identity, but I'd say it's local first and national second. Even though we've got FACTOR and good public funding, geography and economics really work against you if you're trying to tour Canada. Toronto always has this bad reputation of being cold and hard to break into, but with Wavelength we've tried to show another face, like "we're friendly here!" To be warm and welcoming, you know?

How did the record store speaker series come about this year?

It's been something we've been trying to do for the last few years. Two years ago, we did a speaker series for the 11th anniversary, with two local music authors - Liz Worth and Stuart Berman. But it was in the afternoon at the Garrison, and it wasn't very well attended. We've since struggled with how we could go about doing that daytime, educational programming, especially in the music scene where people are maybe less willing to come out to a club midday and listen to someone talk. We thought it would be great to do something similar but as an instore series, to celebrate the role that record stores play in the local music scene. It's a great solution, to just take things to places where there's foot traffic - people are going to be doing their record shopping in the afternoons anyway.

Can you elaborate a bit on the inaugural Artist Incubator series?

There are three bands this year - Fresh Snow, Most People, and Del Bel - we're kind of doing a test drive with the concept. We've had the idea floating around for a couple years, that of Wavelength as an incubator and conduit, but at the same time, in reality, we are just a show promoter. We put on shows, and a community develops around that, and that's great. But there's nothing really formal to it, and we don't have an outlet to work with bands beyond the shows.

We've been throwing around ideas on how to deepen our relationship with the bands that we're really excited about, who are also good collaborators with us at the same time. It started with Fresh Snow - we did a show with them last winter at the Images Festival pop-up space. They had this idea for a show within a projection pod, where they brought in four sheets, made a cube out of it, and played inside while shooting projections through the whole room. It was so cool, and I hadn't seen anyone do anything like that in awhile. It makes you realize what you're missing - to work with a band to create something out of the ordinary, pushing the boundaries of the art form.

IIt's a mutually beneficial relationship. We're providing informal advice on how to market and manage themselves, grant writing, that sort of thing. But it's not at all us becoming band managers or booking agents, though those three bands will be featured in most of our major events throughout the year. Fresh Snow are playing Thursday night of WL13, Most People are going to play ALL CAPS! [Wavelength's summer festival counterpart, held on Toronto Island], and Del Bel are going to be doing our Images Festival collaboration in April - playing live to silent films at Cinecycle. We're also working on a tour - a Wavelength roadshow - with all three bands in June.

As forward thinking as Wavelength tends to be, are there any bands that you would like to see reunite who you haven't already coaxed out of hiding?

The double holy grail of Toronto bands that I've always wanted to see get back together consists of Phleg Camp and Pecola. Both were kind of Toronto's great white hopes in the 90s, so it would be great to see them come back. I've asked them numerous times and they always say no, but maybe next year.