After last Saturday's raucous event, I step into Gerrard Art Space (GAS) on Sunday morning and Joanne Filletti, director of GAS, is airing out the space. "It stinks like beer in here. Don't you smell it?" I guess my nasal faculties have become too accustomed to the rock-and-roll war-torn smell of stale beer, because I don't notice a thing.

"It's worth cleaning it up, though," she hastens to add, smiling as she rights a painting on the wall. As we sit and have tea in the now clean and bright room, looking nothing like the crowded space from the previous night, Filletti shares with me her true feelings about the show: "It's always magical." And that it was.

Saturday night was the second show in a music series called East Side Boom. Born from the curious and passionately musical mind of Jason Kenemy (Woodshed Orchestra), East Side Boom brings together talented musicians and artists from around Toronto and showcases them monthly. 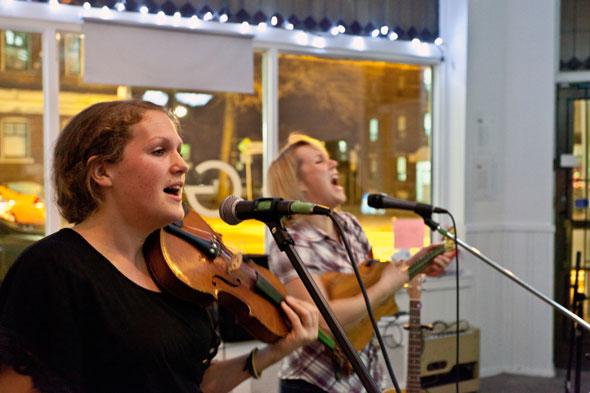 Starting out as solely an idea to have more music and events in the neighbourhood (Kenemy lives spitting distance from GAS), it grew into a full-fledged music series over the fall.

"Having kids and playing music can be a challenge," Kenemy said, reflecting on the reasons he had to develop the series as we tried the espresso at a local coffee shop and kept an eye on his 16-month-year-old daughter, Hazel. 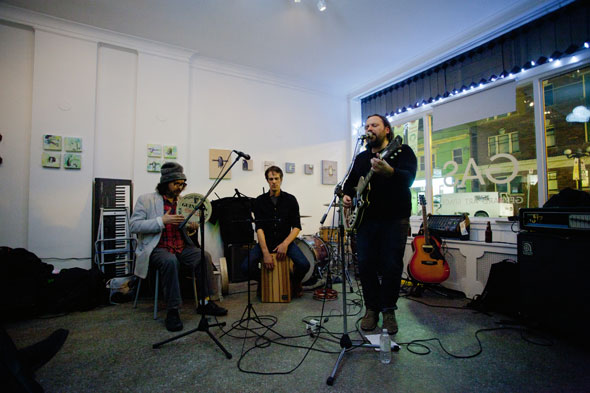 Wanting easier access to shows and creating a community that embraces music were a few goals Kenemy had in mind. "There seemed to be this hole," he said, referring to the lack of a local music scene in his neighbourhood, and for him, East Side Boom begins to fill it.

"I don't want my kids to grow up and think it's an exclusive thing, to play music," he added, and with a father as passionately dedicated to music as Kenemy, I didn't think his kids would have much to worry about.

Saturday's show brought together people from all over the spectrum - Gen Y-ers, baby boomers, musicians, artists, neighbours, and even those who happened to be passing by. With performances by Eva and Lisa, Julian Brown, The Volunteers, and the Woodshed Orchestra, the show grew increasingly boisterous as strangers became friends and chairs were put away in favour of the dance floor. 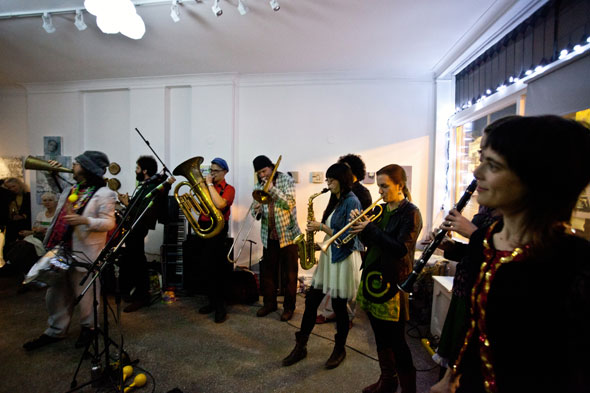 Sepia tones glowed in through the windows as the double streetcar passed by - the lasting, familiar curse of the TTC - and the glowing papier-mache asteroids hanging from the ceiling (as well as the art gleefully hanging on the walls) lent a visually tactile atmosphere to the scene. Filletti's artists know they might just get some extra love from other shows she holds at GAS, though the most delicate pieces always come down.

Although this was only the second show, East Side Boom seems already to have a strong standing in the neighbourhood, and its musical talents are something to be reckoned with. The coming shows promise to be even bigger, as Sam Cash and Jerry Leger play in January, with Autorickshaw headlining February's show. If you're lucky enough to be in the neighbourhood, you will want to swing by - otherwise you'll just be another passerby wondering what all the fuss is about at that cool shop on the corner. 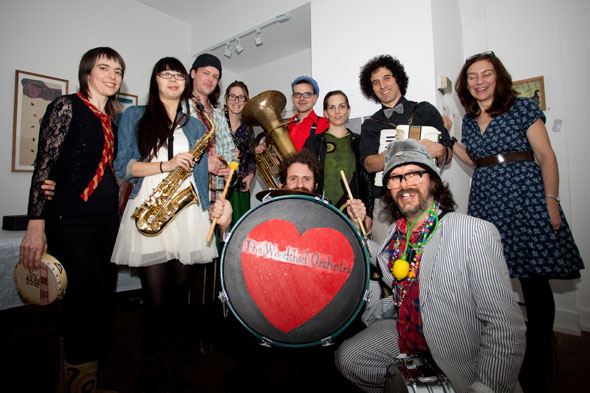