A brief history of the Mod Club Theatre

The Mod Club Theatre has become a staple venue in Little Italy over the past ten years. As a 600 person capacity space, it's been a coveted spot for countless nights of parties, concerts, live shows, drinking and joyful celebration. It initially had a focus on British acts from Amy Winehouse to Muse and New Order, but has since become a catch-all for a wide variety of musical acts.

What some may have forgotten is that the Mod Club, the brain child of Mark Holmes aka DJ MRK, of Can-Rock band Platinum Blonde, actually began as a weekly Wednesday club night at the Lava Lounge (now the location of modern furniture store, Structube). The venue was a perfect fit since it was already decked out with groovy '60s art and an accessible College and Bathurst location. Holmes supplied the music (Motown, Northern Soul, The Kinks, Small Faces, classic R&B) and cut-and-paste videos he put together himself on two VCRs.

"It was a very good time for British music. Bands like Blur and Oasis were at an all-time high, and Toronto was always very receptive to British culture. I thought why not start a night going back to its roots?" Holmes told us.

"I wasn't around to appreciate the '60s but I saw Casino Royale, the James Bond spoof, as a kid and it was one of the most influential films I ever watched. It had all the glamour I loved, and even from that age I thought, how on earth do I achieve that?" Somehow he did, and the night quickly took off, generating line-ups of birds in miniskirts and chaps in skinny suits that sometimes stretched around the block through all forms of weather, even knee-deep in blizzards.

The night expanded to Wednesdays at Lava Lounge and Saturdays at the Revival to accommodate the growing fan base. One night, Revival was slapped with an over-capacity charge which sent Mark scrambling for a replacement venue, as the show must go on.

Across the street was a massive pool hall that had a brief stint as a nightclub named Allure but the neighborhood complained about sound violations and it was quickly shut down. Prior to that, it was a community center of sorts, which explains how it acquired its stage. "I checked it out and it had this beautiful stage and balcony.

I was thinking, what on earth are they doing with this place?" Aside from a (literally) smoking sound system, the party was a success and Mark knew he had to have the space for his own -- but the timing just wasn't right. He kept the night going at Revival for two and a half more years before making the jump across the pond, er, street.

The new venue was dubbed the Mod Club Theatre, to avoid further confusion, but continued to run his Mod Club Saturday nights at both clubs--directly across the street from each other--until Revival decided to take back their primary night. "I wanted to make a place that was glorious--where you could feel comfy, cozy and not have chewing gum stuck to the seat of your trousers. A place that had lights like a real concert." 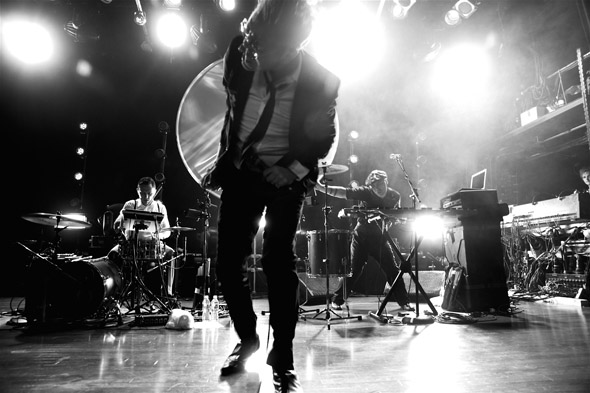 It took some time to convince promoters and agents that the Mod Club was not a threat, but an ally to house their bookings. One of early shows brought in by 102.1 The Edge's, 'The Next Big Thing' concert series with Muse was a historic event for the establishment which cemented years of industry stardom for the venue. Muse still holds their after-parties at the club whenever they are in town, regardless of the show venue. They even flew in one Halloween from Chicago, just to party.

Holmes booked Keane (pre-platinum album status) and paid out of pocket to fly them over for the show. In short, The Mod Club Theatre became something of a Toronto institution, much like New York's CBGB or The Marquis.

Thursday nights at the Mod Club went live to air with "Mod Club Thursdays," and Holmes claims to have started the global indie-dance-rock trend with his nights. He was justifiably irked when new music programmers stepped in and yanked his night, citing various reasons, such as demographic rescheduling.

The Mod Club celebrated its 10th anniversary with a renovated upper 'Loft' space and reinforced soundproofing. Holmes also declares war on pop music. "Our mission is to stop the sickly sweet tooth rotting music. Music is in desperate need of a kick in the ass--it's an embarrassment. I look at our fans as the reserve. We need to rally together and show this city that we aren't going to listen to just those five pop stars and what ever comes out of their recording companies. The Mod Club has always been revolution headquarters and will remain revolution headquarters for many years to come."

Writing by Jesse Ship. Photos by igormazic and Roger Cullman in the blogTO Flickr pool

The history of Electric Circus when it was Toronto's best party

The history of Lee's Palace in Toronto