The history of the El Mocambo in Toronto

There are some music-related events that will forever live in a city's memory. Even Toronto has had its fair share, including one in particular that took place at the El Mocambo Tavern on March 4th and 5th, 1977 involving a nondescript band billing themselves as "The Cockroaches" that ended up being a secret show from The Rolling Stones.

Oh, if the El Mo's walls could talk, just imagine the stories they would have overheard over the years. Like Keith Richards' heroin bust a few days earlier. Or about Ronnie Wood and Margaret Trudeau.

But I digress...the Stones were among the many players that helped grow the multilevel venue's reputation as a go-to destination for musicians looking to make an impact in North America, let alone Toronto.

If any place in our fair city could be considered a monument to rock and roll, it's the venue home to the neon palm tree sign just south of College on Spadina.

I also don't think it's the craziest thing to suggest that it is the closest Canadian equivalent to the forever-worshipped CBGB's in New York.

The pedigree is certainly there.

Shortly after defending their theory of "de-evolution" on Saturday Night Live, Devo donned their yellow jumpsuits for a weeknight Toronto appearance to the delight of Mohawk-sporting punks everywhere.

Joey, Johnny, Dee Dee and Marky Ramone make a case for the building having proper air conditioning with a perspiration-inducing set of three-chord thrashers. 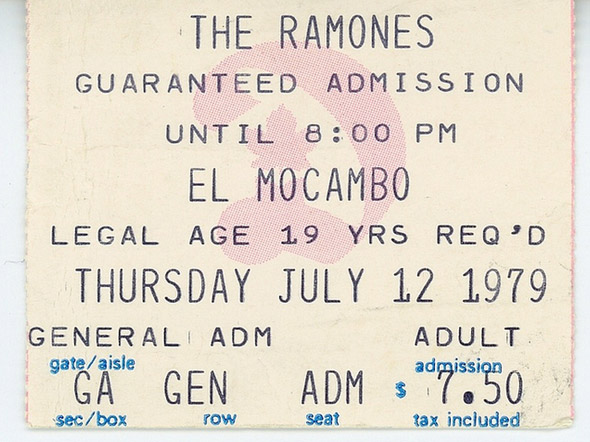 A ticket to see The Ramones at the El Mocambo in 1917. Photo by Ken Schafer.

Four unassuming, stylishly coiffed Irish lads play their first-ever concert in T.O., in support of their debut recording Boy. I am of course referring to the one and only U2. Bono especially had quite the look going on, arguably influencing A Flock of Seagulls down the line.

Duran Duran were yet another ensemble that used this downtown club setting as a coming-out party of sorts, introducing themselves to an entirely new audience. In addition, they represented one of the last vestiges of the melding between New Wave and pop at the el Mo.

After fleeing from the messy breakup of her former all-girl group The Runaways, Joan Jett storms into the El Mo on the strength of two albums with killer anthemic title tracks, "Bad Reputation" and "I Love Rock 'n' Roll."

Steven Van Zandt takes a short break from his E Street Band duties to front a solo project, Little Steven and the Disciples of Soul. His work with Bruce Springsteen was a fixture on CHUM-FM who did a live broadcast of Van Zandt's Toronto tour stop.

Stevie Ray Vaughan and Double Trouble burn down the proverbial house with searing blues guitar that leaves tongues wagging, thirsty for more "Texas Flood." Sadly, Vaughan died in 1990, but his status as an all-time great will live forever thanks to the release of Live at the El Mocambo the following year.

The then relatively unknown Tragically Hip travel down the 401 from Kingston to redefine Canadian rock, playing rowdy versions of tracks from their eponymous EP like "Highway Girl" and "Last American Exit."

The Cult were the last big headliner before the doors at 464 Spadina Avenue were briefly closed in November of 2001. Former Hamilton resident Ian Astbury specifically requested a gig on October 29th of that year so the venue could go out with a bang.

But like rock music itself in the 21st century, the El Mocambo persevered, and it's not like anything significant hasn't happened there since its acknowledged heydays.

Some of my fondest personal "El Mo-meries" have occurred just prior to the recent renovation like when Dine Alone Records took over both floors for its Canadian Music Week showcase on March 23rd, 2012, featuring a Rolling Stones-worthy surprise from The Sheepdogs.

And during North by Northeast a few months later (June 14th, 2012 to be exact), post-alternative distortionists A Place to Bury Strangers not only blew everyone's eardrums, they blew minds with their performance art that included guitarist Oliver Ackermann trying to piece a hole through the main level's ceiling with his already-battered instrument.

Or maybe he was just helping kick-start the much-needed renovations.

In 2014, The El Mo was sold to former Dragon's Den star Michael Wekerle after being listed for almost $4 million.

After undergoing extensive renovations including an update to its iconic palm tree sign, the El Mo finally reopened in March 2020, just before the city went into lockdown due to the pandemic.

It's now hosting virtual events and film shoots as it awaits permission to welcome crowds one again.