"You can stick around for a bit but this show is really just for the fans, man," Tyson Parker tells a videographer outside of Augusta Avenue's Supermarket. A crowd of nearly 100 has gathered around the popular Kensington Market restaurant early Sunday afternoon as Parker, the VP of National Media & Artist Relations and Corporate Communications of Universal Canada, is overseeing that families with small children are given priority, placed in front row spots by the makeshift stage that faces the street. Some pedestrians stroll by, stopping to briefly observe the commotion, while others have arrived to follow up on rumours of a secret show by The Tragically Hip, as spread by folks like broadcaster Alan Cross and radio stations like 102.1 The Edge.

Around 1:30pm, The Tragically Hip confirm through their official Twitter account, tweeting, "The cat's out of the bag" and by 3pm, swarms of people have filled the streets, claiming seats at surrounding bars and even beginning impromptu rooftop parties in nearby apartments. By the time Gord Downie, Robby Baker, Gord Sinclair, Johnny Fay and Paul Langlois step out on stage at the top of the hour--not a minute late, as polite Canadians do — the crowd of nearly 300 chants, "Hip! Hip! Hip!" 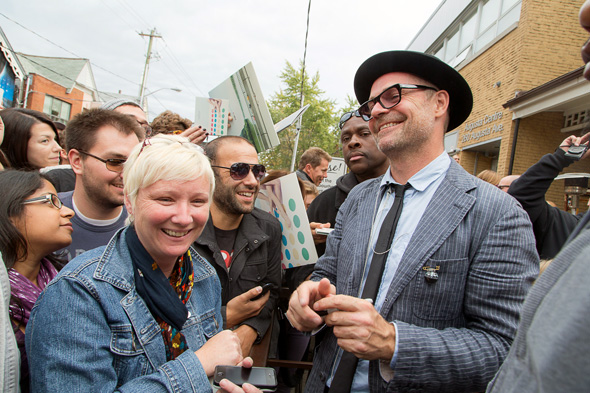 Downie, dressed in a casual pinstripe suit and a feather-adorned fedora, shouts, "It's good to be back at the Market!" before ripping into "At Transformation," the first track off the new album Now For Plan A. He is playful but laid-back, knocking his microphone stand around like it can take it, and pausing to rest nonchalantly on the amps, checking his watch in jest before yelling, "Shut up!"

Downie stops himself from getting too political but amuses the crowd and the rest of his band with one-liners like, "If Justin Trudeau came up with some really fucking bold policies, I might vote for him." The crowd is loving the light theatrics as he starts into "Grace, Too" but it's over all too quickly as he goes wild on the ending of "Man Machine Poem." 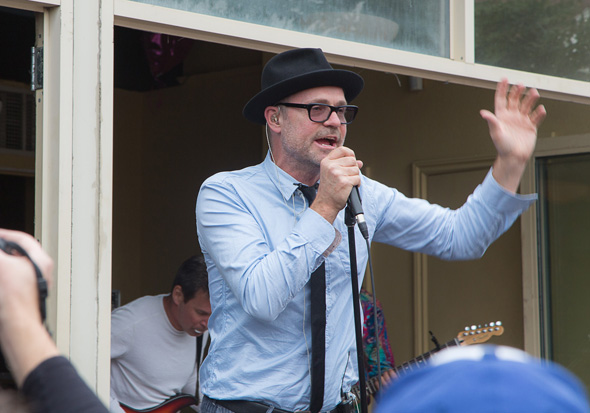 This is the scene that recurs until 6pm as The Hip play a new, three-song set every hour, on the hour ("a challenge," Downie calls it), before they break to autograph vinyls for confused children and walk through the crowds to take photos with fans. A merch girl wanders during lulls, selling copies of the homegrown, Ontario-produced album, which features art by local photographer Andrew B. Myers.

Die-hards stick around for all four mini-concerts — a pair of students from Edmonton do their course readings on the sidewalk in between sets, and a young mother sends her husband home with the kids and a bus pass — while others filter in and out, enjoying the music as casually as they might sitting fireside on a camping trip. 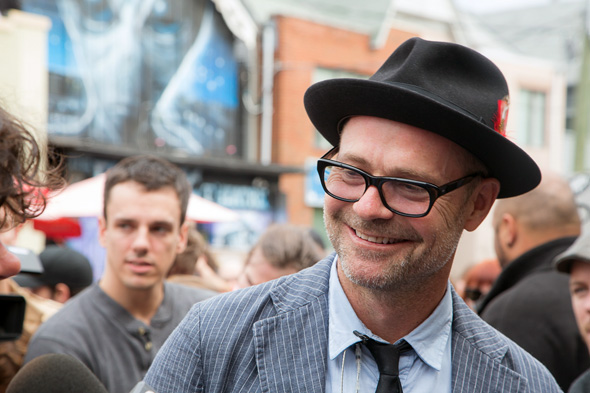 By the time the second set begins, the band is noticeably calmer; relaxed. Classic Hip is revisited in this set with songs like "Ahead By A Century" ("My Music At Work" and "Bobcaygeon" make later appearances) and by the end of the third mini-performance, Downie is downright sentimental, introducing "We Want To Be It" with a brief speech about self-actualization.

By now, the media has long since been barred from shooting as Downie directs all his attention towards fans. "There's no stagecraft here," he says, reminding the crowd of why they have chosen to do this show. "We're all just about the common good."

Now For Plan A will be available in record stores and on iTunes on Tuesday, October 2nd. In case you weren't in on the secret, rumours persist that further mini-shows will be held Monday through Wednesday evenings at Supermarket (268 Augusta Avenue).