Controversy aside, this tour is also one of her most technologically-intricate productions. Madonna collaborated with many of the same people behind her dazzling Super Bowl halftime show from earlier this year, including Cirque du Soleil's Michel Laprise, who returns as show director.

Montreal-based multimedia production studio Moment Factory was also brought back. "The whole process started right after the Super Bowl. The day after we finished that show, everybody put their minds on the tour," says Johanna Marsal, a producer at Moment Factory. The company has also worked with many other artists including Arcade Fire, Celine Dion, Jay-Z and Tiesto.

Their mission for the MDNA Tour: Create content to shape the universe, enrich the choreography and intensify the drama of 12 of the show's 22 songs - including classics "Express Yourself," "Like A Prayer," "Vogue," and recent hit "Hung Up," where Madonna and her dancers walk across a slackline.

With four months to bring Madonna's vision from concept to reality, the Moment Factory team created 2D and 3D animation pieces, including a 3D photo-realistic ornate cathedral that serves as the dramatic backdrop for the show opener "Girl Gone Wild." "The cathedral took us more than a month and a half to create. She really wanted to have a dark and magical beginning," says Marsal. 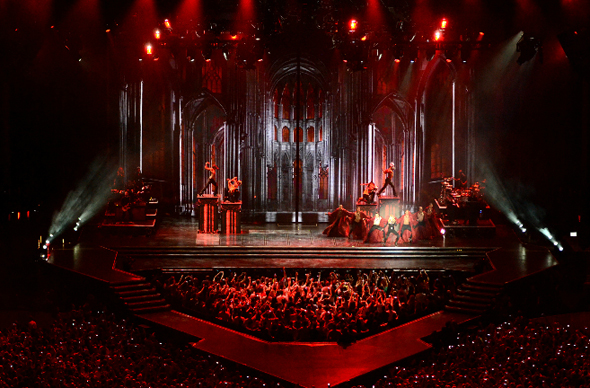 The team also co-ordinated video shoots in Montreal, New York and they even shot a kaleidoscopic train ride through India, which serves as the backdrop for "I'm A Sinner" in the final act of the show.

Madonna describes her show as a journey that moves from darkness to light, as exemplified by the violent first act - 'Transgression' - which includes the Tarantino-esque track "Gang Bang" from her recent album and lots of bloodshed in the background courtesy of Moment Factory.

In keeping with the philosophy of movement, Moment Factory leveraged the state-of-the-art stage, which contains 36 motorized cubes, all covered with LEDs and constantly morphing through the show. The technology, Marsal teases, is brought to the brink in the full throttle, assault-on-the-senses finale.

Throughout the process, Marsal's team had to ensure their content integrated seamlessly with the choreography, lighting, and other elements, which were all being conceived, revised and finalized at the same time. "The amount of communication and co-ordination in this project was insane," says Marsal.

At the heart of the project was ringmaster Madonna, who has a reputation for being very hands on and detail oriented. These qualities may push some over the borderline, but Marsal and her team appreciated the experience. "It was a pleasure to work with her, because she was very involved in every level. We would know right away if we were going in the right direction or if we should rework the concepts. She made sure all the departments were in synch. I was surprised by her energy and talent." 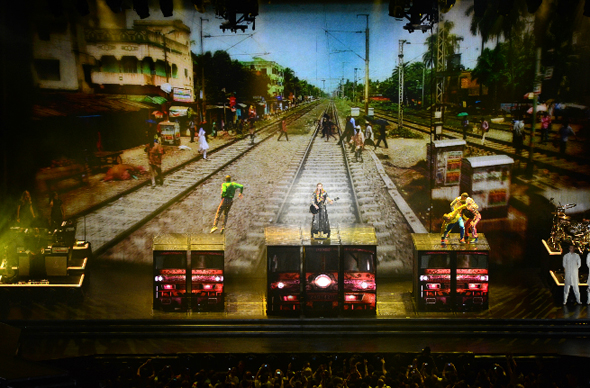 Working on the Super Bowl was good training for the tour, says Marsal. "There were plenty of things that we wanted to put into the Super Bowl that we couldn't, because we only had 12 minutes. So the tour was a great opportunity to showcase all the ideas and everything Madonna wanted to showcase."

As multimedia technology continues to evolve to greater heights, Marsal says the future of the concert experience also lies in the participatory aspect. Earlier in June, Moment Factory worked with singer and dancer Usher on his London show. Audience members got the opportunity to live tweet and their tweets materialized on the stage backdrop.

After months of hard work, Marsal and her colleagues enjoyed the fruits of their labour when they attended the MDNA Tour's opening night in Tel Aviv in May and its Montreal stop on August 30. "When we saw the show for the first time and saw the public react to it, it was an amazing sensation," says Marsal. "For me, the best part was when the show came to Montreal, and the fact that we could share our work with our colleagues, collaborators and community; it was a completely different feeling."