Madonna expresses herself at the ACC

Madonna, after all these years, still feels shiny and new. Her latest tour, which stopped by the Air Canada Centre on Wednesday and Thursday, was a spectacle of the grandest kind.

Aptly titled the MDNA Tour, the show had the icon's creative genetic makeup splattered across the stage. Fans - present company included - can especially appreciate the nods to her 30-year journey, including the Catholic iconography, the in-your-face sexuality, and even the violence that recalled some of her videos from the early 2000s. 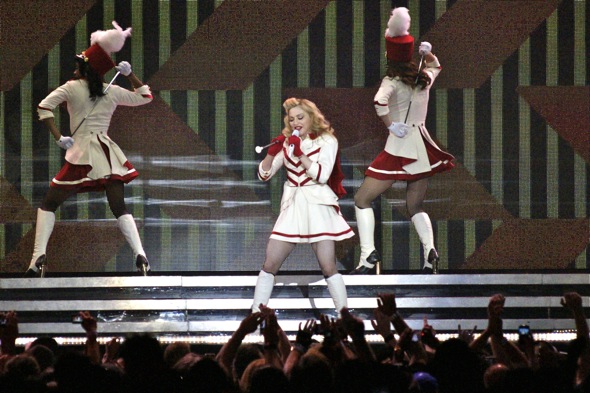 But this was not a greatest hits show. Madonna is never one to look back. Always facing forward, songs from her recent album MDNA were front and centre. Released in March, the album didn't exactly set the charts on fire, but the songs were magical on stage.

Critics have labelled MDNA her divorce album (from Guy Ritchie). The show's first act must then be her therapy session. Titled "Transgression," the singer emerged in show opener "Girl Gone Wild" from a confession booth dangling in the air, her face covered in a veil, and holding a rifle. Astute fans have pointed out that the veil looked an awful lot like the one she wore on her wedding day; except it was now black. 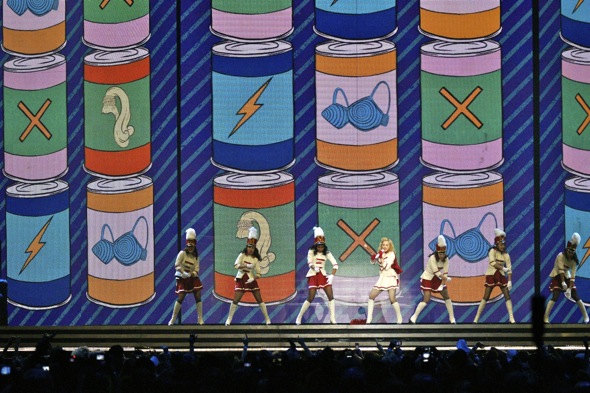 Girl power ensued in the next song, "Revolver," as the singer and her female dancers brandished machine guns. The third song "Gang Bang" was a Tarantino movie come-to-life as a solo Madonna coolly took out assailants one bullet at a time, blood splattering on the giant screens on stage. "Bang, bang, shot you dead. Shot my lover in the head," she sang. You have to wonder who she was singing this to. 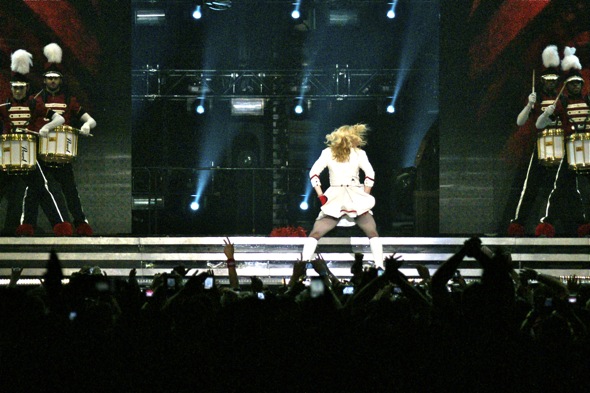 An integral factor to the show's magic was the state-of-the-art stage and giant video screens - as well as the lighting and set design.Take for instance, the 3D lifelike cathedral backdrop for "Girl Gone Wild" -- it felt like the gothic structure had been dropped inside the ACC. The 36 motorized cubes morphed the stage throughout the show. One moment they're cathedral pillars, the next they're trains whizzing through India, and the next, they're DJ turntables. Sometimes didn't know where to look; like up, for instance, at the drum line suspended from the ceiling during the cheer squad performance of "Gimme All Your Luvin."

Not to be outdone by technology, the energizer bunny of pop showed off her trademark energy, stamina and even new moves. From walking across a slackline, to twirling a baton, to doing kung fu during the super cool "I'm Addicted," she's telling wannabes to stay in line. 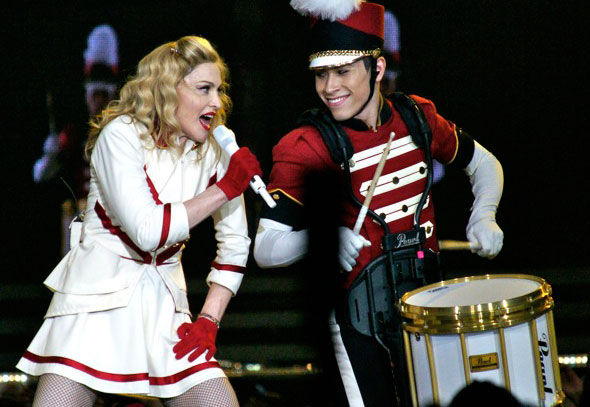 Madonna can be stingy with her hits. When she brings them out, they're reinvented. Sometimes, they're done wonderfully; the percussive reworking of "Open Your Heart" was beautiful, and the cheeky mashup of "Express Yourself" with Lady Gaga's "Born This Way" was also fun. At other times, the reinventions fell flat. "Like A Virgin" was wasted as a dirge-like waltz, while the sample of ABBA's "Gimme! Gimme! Gimme!" - i.e. the best part - was practically obliterated from "Hung Up." 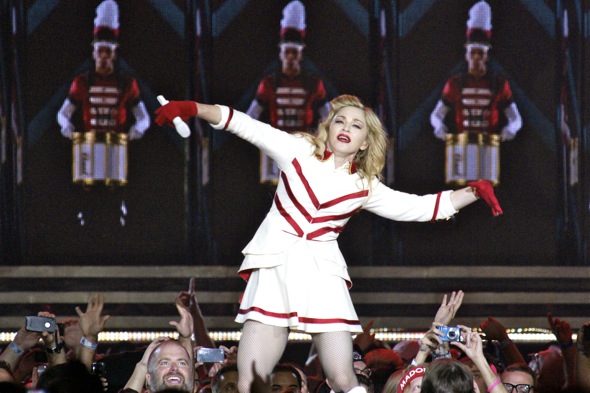 More hits on the setlist would've been appreciated. This message could not have been clearer when the entire ACC jumped to their feet, dancing and singing along to the night's penultimate number, "Like A Prayer."

Having attended her previous three tours, I can say that Madonna is not usually chatty, often having a ringmaster's cool, but this time around, she was warm even joking, "The more you yell, the more clothes I will take off." The crowd went insane. I wonder how much her 11-year-old son Rocco, who was one of her dancers, cringed.

One of the evening's biggest surprise came halfway through the show. For someone who is known to rarely alter her setlist, the usually regimented Madonna thrilled the crowd by performing "Holiday." This was only the second time out of her 40+ shows to date that she performed the full song. She said she wanted to thank Toronto - a city she once called a "fascist state" - for being such an enthusiastic crowd. For fans who lapped up the moment, it was just like being touched by Madonna for the very first time.