On Thursday night, Gotye proved that he's much more than somebody that you used to know by demonstrating his talents--singing, drumming, playing a multitude of instruments, and entertaining the undersold Molson Amphitheatre crowd.

If you've only heard the one song, you're missing out--Gotye's Making Mirrors album is full of lush arrangements and intricate instrumentals, and some of them are even as hummable as his breakthrough hit. Live, the songs translated well on the big stage, buoyed by a bevy of animated projections that can be described as a trippy amalgamation of Ren & Stimpy, Yellow Submarine and The Jetsons. 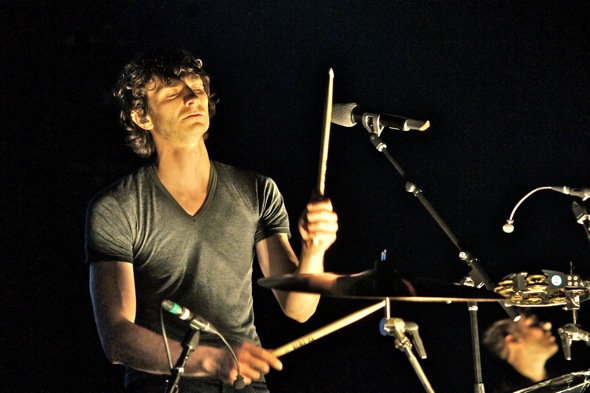 Wouter "Wally" De Backer, a.k.a. Gotye, moved deftly between various drum kits set up around the stage, accompanied by four other musicians.

At one point, he and his bass player were jamming and having so much fun so close to each other that they almost collided. "Don't ever do that again," Gotye joked, "or I'll sit on you!" His banter was light and polite throughout the night, letting the music and the accompanying visuals speak for themselves. 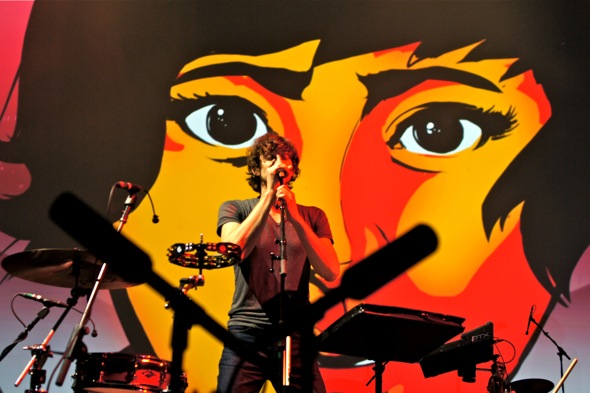 It wasn't until one hour into the show that he really engaged the audience. "Can you help us sing this next song?" he pleaded. And everyone stood up, perhaps hoping it was his 300-million-plus viewed YouTube sensation.

He got the guys and girls in the crowd singing along with a "Hey-ee-ah-oh," the opening of the penultimate song on Making Mirrors. But then he lost all the momentum he had gained after the song ended, by asking "is it cool if we play a couple of quiet songs"--just when he'd gotten the crowd on their feet.

One of those slow songs, "Bronte," has a Princess Mononoke-like video, which was incredible to get absorbed in as the song played live. 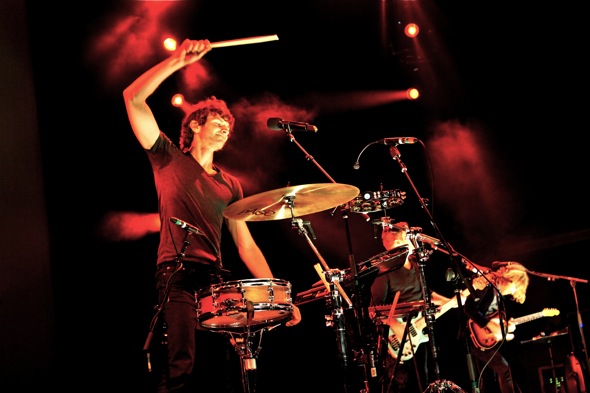 But Gotye eventually won the crowd over after they'd patiently sat back down in their seats. "Does this sound familar?" he teased. Then he tinkered on a keyboard, triggering a sound, but the crowd was silent. "How about this...?"

There were lots of young couples and gaggles of girls who finally squealed in sheer delight when they began to recognize the familiar opening of "Someone That I Used To Know." Screams of "I love you!" spontaneously burst from the excitable mouths of young female fans. I think I even saw a guy dancing in the aisle.

Caroline Polachek--the singer from one of the opening bands, Chairlift--magically appeared from the back of the stage at the last moment, filling in admirably for Kimbra on the duet. 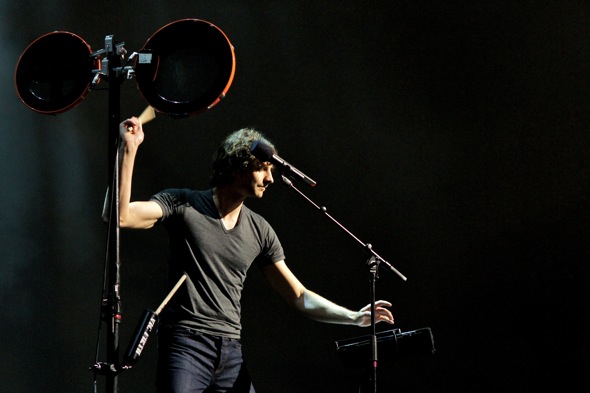 After Gotye announced "We've got one more tune for you," many began making their way out, having been satiated by the juicy hit.

It's a pity, because they missed the encore, which included "Seven Hours With a Backseat Driver" and "I Feel Better," which was played loosely and with soul. You could tell everyone on stage was having a great time, and judging from the smiles on the faces of all who stayed, the feeling was mutual.

If you're willing to look beyond that overplayed tune that made him a star, here's a sneak peek at Gotye's new video for his song "Giving Me A Chance:"