Shuffle Demons put on a Cluster Funk at Lula Lounge

The Shuffle Demons are back with a vengeance with Cluster Funk, their first new studio release in 19 years, which had its CD release party Thursday night at Lula Lounge.

After seeing them a couple of years ago at The Orbit Room, I knew they were up to something special again. They started their set on the street -- where they first earned their cred -- in front of the club, and went on to the stage to play a double set of electrified jazzed-up funk. 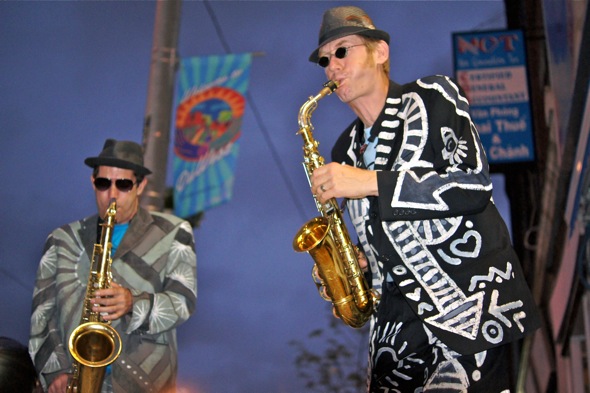 Richard Underhill led the quintet, all dressed in Kurt Swinghammer's lively hand-painted suits. Cluster Funk's name comes from a sound guy the band met during the SXSW music festival in Texas, explained Underhill. "He said, 'There be daddy long legs everywhere on the wall in one big cluster funk!'"

The night was filled with raucous versions of Shuffle Demons classics like "Get Out of My House, Roach" and "Funkin' Pumpkin." 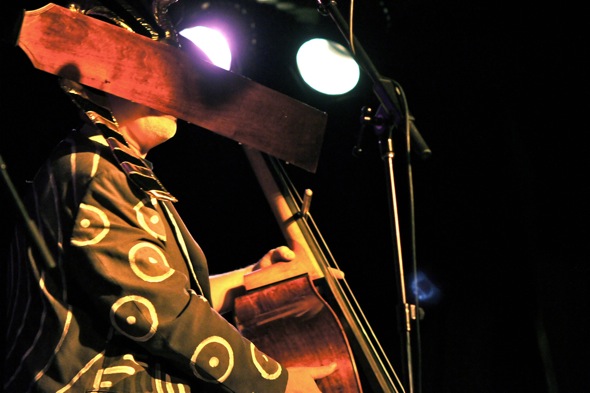 George Koller was up to his usual stage antics. During "The Bass Sacrifice," he took out a back piece of his stand-up bass and somehow wedged part of it in his teeth and used it as a bow of sorts while two drumsticks were wedged in the strings. 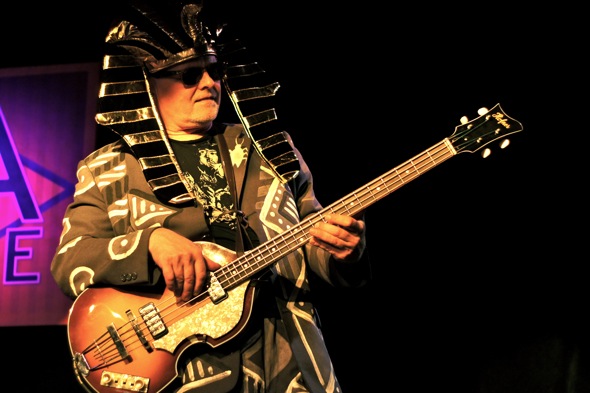 That man can play a mean bass, both acoustic and electric. And he's written some mighty fine new songs, including "All About the Hang" and "Way After Midnight." He also sported an impressive King Tut headdress. Meanwhile, Perry White had some soulful solos on his tenor sax during "Perry's Groove" which also featured some intricate drumming by Stich Wynston.

After the first set, I got a little peckish and was happily surprised to find Cheese On Bread on the menu. It was actually goat cheese bruschetta and it was delicious -- as was the Shuffle Demons' rendition of their song. 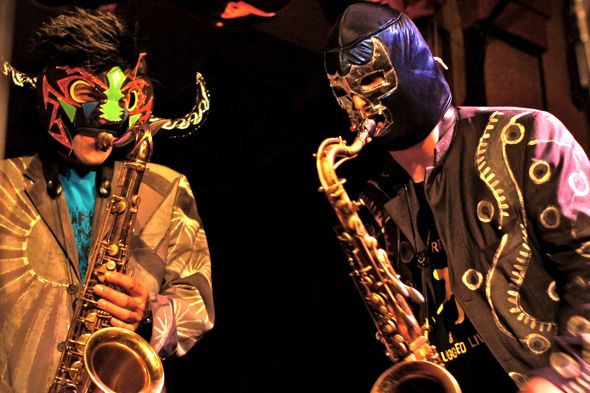 After a break, five guys appeared on the stage wearing Lucha Libre masks and introduced themselves as Los Estrellas Norte. The masks came off by the end of the song and the Shuffle Demons were back with another new song off Cluster Funk called "He's the Drummer," which got the dance floor area in front of the stage packed and moving.

Opening up the night was a talented group of York University students that go by the name of Turbo Street Funk. They played familiar hits from the '70s to the present with their own arrangement, featuring trombone, alto sax, French horn, electric guitar, drums and a sousaphone with a microphone in it. 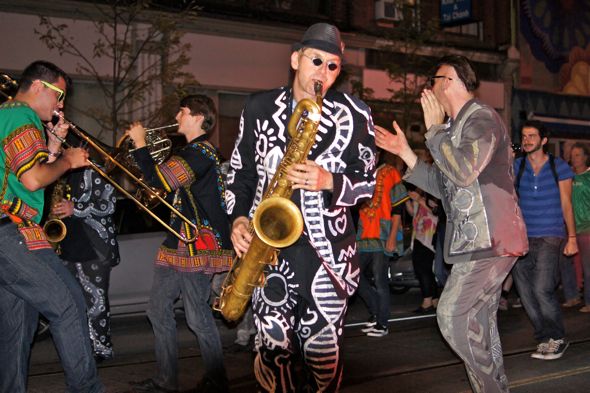 Part of their set included the theme from Spiderman and Inspector Gadget as well as covers of The White Stripes' "Seven Nation Army," Eurythmics' "Sweet Dreams," and Lady Gaga's "Poker Face," among others. 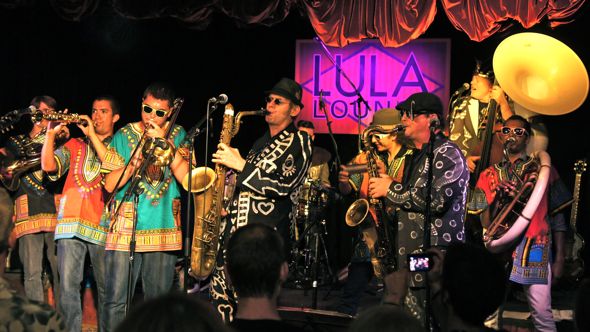 Turbo Street Funk caught the interest of the Shuffle Demons one day while busking at King and John streets, where they covered "Spadina Bus," although tuba/sousaphone player Trix Sharma admitted to first meeting the Shuffle Demons when he was in grade nine at band camp.

They joined the Shuffle Demons on stage towards the end of the night for an extended rendition of "Spadina Bus."

The huge jam ended up making its way to the front of Lula Lounge and spilled onto the sidewalk and onto Dundas St. W., stopping traffic as they jammed and bopped and clapped and danced together. Indeed, what a cluster funk!