Mark Pesci on life as a DIY concert promoter in Toronto

Mark Pesci's Toronto Punk & Hardcore Shows is a mouthful, but the frank name that local promoter Mark Pesci attached to himself back in the early days of Facebook is a good indicator of his upfront style. Want to get your punk, indie, garage or hardcore band booked through Mark Pesci? Make it out to his gigs and hand him a demo. Is there a touring act coming through the city? Pesci wants to make sure they'll have a good time and come back soon — simple as that.

Pesci's newer projects include working as booker for The Shop under Parts & Labour and co-founding the new local music listings site Just Shows, but he's been booking DIY shows (or "90%" DIY shows, sometimes working with labels, agents and other promoters) in Toronto for over 10 years.

Scores of touring bands like Thee Oh Sees, Lemuria, and Mean Jeans have all found shows in the city through Pesci, as have local acts ranging from Final Fantasy to US Girls, DD/MM/YYYY and Career Suicide. Yet Pesci keeps it real: he still prints and cuts his own tickets, tries to book a few all-ages shows each month, and has nothing but glowing words for Toronto's music scene, especially its local bands.

We caught up with him near his home downtown last week to talk about what it's like to be one of Toronto's best-loved and hardest working promoters.

How did you get involved with the Toronto music scene?

I grew up in Hamilton. I always liked music, and I started going to shows at a really young age — fourteen or fifteen years old--then in high school I started playing in bands and putting on shows.

When I moved to Toronto I was in a band, and I started doing shows more regularly because we'd trade shows with bands from out of town: we'd play Chicago and Milwaukee, then when they came to Toronto we would owe them a favour. Over time, I got really good at it, so after my band broke up I just kept doing shows because it was a lot of fun and it was a good way to stay active without having to rely on three or four other people to be in your band. 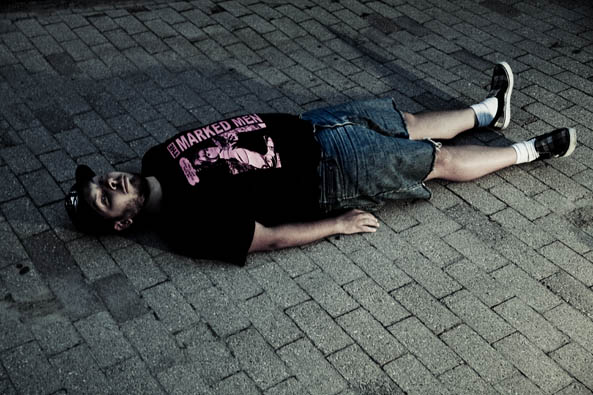 I moved to Toronto in 2000, but I tend to say I started booking shows ten years ago. I started doing shows pretty much right away, but as I got settled, it picked up and I was doing more and more. I was doing radio after a couple of years, and that's how I started to get my feet wet promoting: doing benefit shows for CIUT radio, and that's when my band started as well. It was a perfect storm of activity that got me working hard.

Are you a one person operation, or is there a team behind Mark Pesci's Punk & Hardcore Shows?

I essentially work by myself, but at the same time, I think partially because my background is punk and hardcore, people tend to help each other out a lot. So I work with the Stuck in the City Collective and Embrace a lot, and lately I've even co-promoted shows with Dan Burke here and there.

I recently started Just Shows with another promoter, Chris Slorach, from the band Metz, so we co-promote shows occasionally as well. I consider myself an independent, but I'm always working with other people because you're only as strong as the people you surround yourself with. 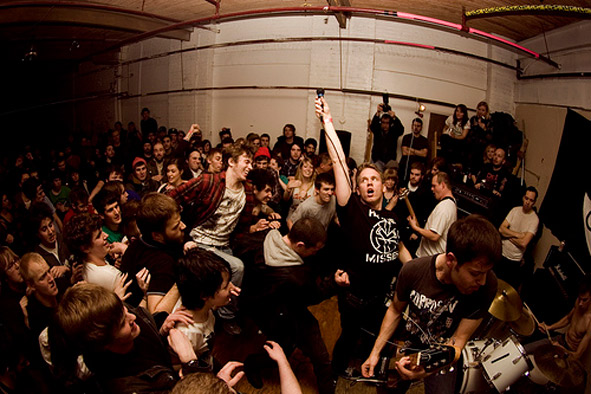 How many shows do you put on in an average month, or year?

(Laughs) Oh goodness. I would say on average I do about eight to ten shows a month. There are slower months, then in the fall I do a festival (Not Dead Yet) and that's thirteen shows over four days, so that bumps my numbers up. For NXNE, I did three shows in three days.

Do Mark Pesci events and artists have a certain sound, or ethos? How do you find the artists you book, and what makes your shows special?

I've had that Facebook name for ages just because it's what I signed up with in the beginning--I don't book shows under any tag. I still book three-chord punk, but I book a lot of garage rock, a lot of indie bands, and hardcore, of course.

I book bands I like — both the music and the people. For example, I have Ty Sygall coming up in the fall. His music is great, but he and all his bandmates are my friends, too. We see each other all over North America and pick up like old friends. That's really important to me. I can travel anywhere now and know people. It's about being part of a community.

I try to uphold a DIY ethos and aesthetic. I'm booking directly through artists, or their their agents, or their label, but in the end they're all still crashing at my house. 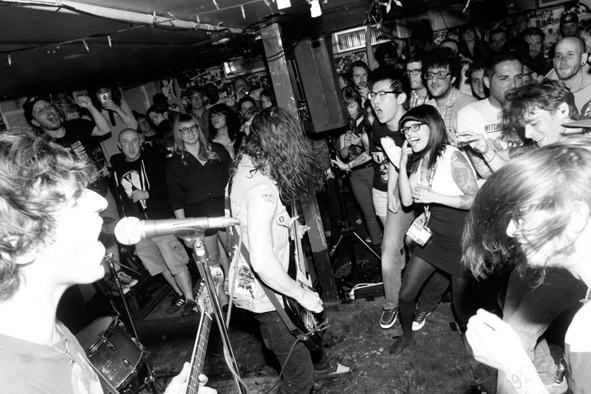 I'm into doing loft shows and I love DIY spaces but a lot of the kids going to the shows I'm booking are college-aged. I try to book all-ages whenever possible, and I do at least one or two any given month. At Parts & Labour we've made an effort to host all-ages shows. The more we do them in the space, the easier it gets, logistically speaking. Everybody involved understands that it's important to give kids access to live music at an early age to get them interested in the local music scene and hopefully starting their own bands.

Toronto is a hard city for DIY all-ages spaces to exist. I grew up going to shows in high school, but I think a lot of kids now need to take more risks: they'll only see bands they know. Sometimes I think they have things a bit too easy, having everything at their disposal on the internet.

We have an all-ages section on Just Shows, and our goal is to get high school kids to take chances. The band links are all there on each show, they can check it out — like "Hey, this random band from Missouri, I'll go see that." There are always lots of great all ages shows in the city. You just have to look for them.

How is the music scene in Toronto different than other cities? What are you excited about right now?

In a lot of ways the Toronto music scene isn't very different from a lot of major cities, and that's what's so great about it. It's a world-class city and the bands from here are great, while touring bands always make sure to come through Toronto--which wasn't always the case. Things have gotten easier with border crossing in the last seven years or so.

There's an energy in Toronto that is really palpable and if audiences don't notice it, bands definitely do. Time and again bands leave Toronto saying "this was one of the better shows of our tour, we can't wait to come back," and really, as a promoter I want the audience to have a good time, but I also want the band to get enough money to warrant having made the trip.

It's a testament to the scene here in Toronto that our bands are awesome and they're only getting better, and as the city gets bigger and the music scene expands, local bands continue growing — it's a really exciting time to be involved in music in Toronto.

Is there anything you would you like to see change?

I'd like to see more music writing going on in the media. I know there's only a limited amount of space in print media, or even on blogs, but there's a lot of big acts that come to our city that don't get written about — their shows are totally under the radar. You see different media covering the same bands, like PS I Love You were on the cover of Exclaim and one of the weeklies the same week: it's like, come on, don't you guys have something else you could be writing about? Not to take anything away from PS I Love You, but there are more stories out there to tell and journalists aren't necessarily going out there to find them. Anyway, it's a problem with the system.

Obviously I'd love for another permanent all-ages venue that would be cost effective and serve the community, but that's a tall order. I'd like to have a cool DIY space akin to The Smell in LA and the Che Cafe in San Diego. Otherwise, Toronto's got a great music community that doesn't have a ton of inherent problems.

Are you an artist yourself? Do you have a day job?

I'm a full time promoter. Booking Parts & Labour is technically my day to day job, and I put on concerts there as well as other venues. I always have one foot in concert promotion, at my day job and working independently.

I never imagined in a million years I'd be able to do this full time. It's a lot of work, but it's really fulfilling, and I'm lucky that people come out to my shows and make that a possibility. 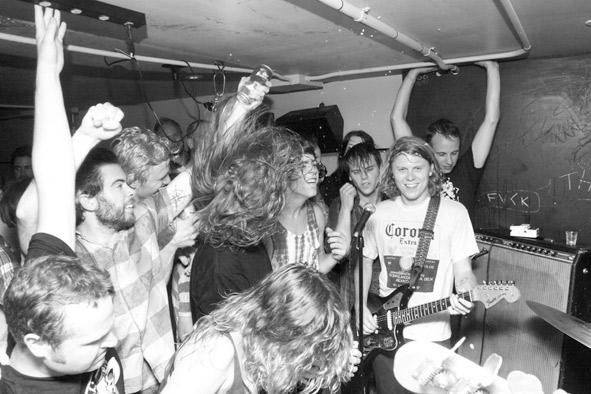 What local projects are you a part of beyond promoting shows?

In a lot of ways music is my life. I mean I book at Parts & Labour, I'm a co-founder and curator of Just Shows, and I work with other promoters. Every September I work for TIFF — my background is actually in film. I grew up working in a movie theatre and I miss film, but day-to-day and month-to-month, music is what I do, and it's great.

You're involved in a ton of stuff here in Toronto and beyond. What keeps you going?

It gets frustrating sometimes. You get tired of seeing bands almost every day, but at the end of the day I love the music and I love meeting bands. You always have mutual friends and you get to share stories and share experiences and it's really just being part of that community that at the end of the day keeps me interested in doing it, both locally and across the continent. People love it.

Do you have any plans to branch out further, like say starting a label or booking tours?

MP:One thing I've learned is opportunities just happen and you have to respond in turn: things like record labels and booking tours have almost happened a couple times, but I just have so much on my plate already that it's tough. I don't have any short terms plans to do anything, but in the long term I'm sure something will come up. 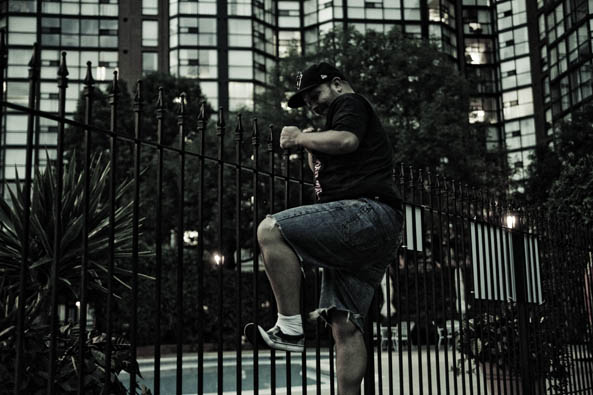 What's the best way for fans and artists to reach you?

I am very easily Googleable at my old email, which is markpesci@hotmail.com, and you can also reach me at mark@justshows.com. I love getting emails from bands and feedback from people that attend shows. My one rule for bands is "come to shows, don't just ask me to keep playing them," You know, it's a community, we're not here to serve you — be a part of something.

Where do you get your caffeine Fix? The Coca Cola Company

East or west side? West Side. Parkdale.