If you're secretly listening to Shania Twain, a Disney soundtrack or your kids' nursery rhymes on the TTC, maybe it's time to switch to something a little cooler. Meagan Perry wants to find out what you're listening to and add it to her website, Stationary Groove.

The site, established by Perry, an audio technician returning from a six-year teaching stint in Whitehorse, hopes to map the songs, artists, and genres people pump during their commute, and allow others in on the fun. Each TTC subway station has its own playlist that visitors are encouraged to add to; if it's something a little embarrassing or obscure, not to worry, the more the merrier.

"I really noticed an increase in people listening on headphones on the subway," says Perry, talking about the days after her return from the Yukon. "People were creating their own worlds in a communal space, tailoring their own individual environment that is a little bit impregnable." 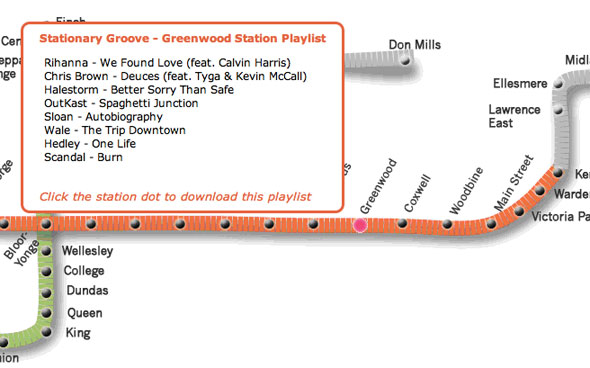 And that's what Stationary Groove hopes to crack. The project aims to open up people's private musical experiences to a wider audience and hopefully spring a few surprises. "There's a real intersection between fashion and music, and so you look at [people] and guess what they're listening to and it often wasn't true," she observes.

Rather than rely solely on submissions, Perry rode the subway and asked people what they were listening to at that exact moment. There were a few red faces, but the upshot was an insightful and candid look at the different music enjoyed in various neighbourhoods: Russian pop at Victoria Park, Korean music up north and Drake just about everywhere.

Each playlist is, where possible, available for sample and download on iTunes. You can add your own choices and explore Toronto's musical taste station by station using an interactive mapon the project's website. Perry plans to update the lists herself sometime later this year.