Light Asylum and Trust play to teens in heat

Fresh from the sunlight of MoMA PS1's 2012 Warm Up series in NYC, Light Asylum and Trust brought their brooding synth wave to the dark of Great Hall on Friday the 13th.

The air in the venue was as dank and tropical as it is in my steam room of an un-air-conditioned apartment, pushing a lot of fans out onto the street whenever possible. There, the scene was made up of very young people wearing what I'm going to term "Tumblr gear"--street wear from the Internet, if you don't know what I'm talking about. I even saw a black leather harness belt, which are honestly adorable, especially on kids with fake IDs. 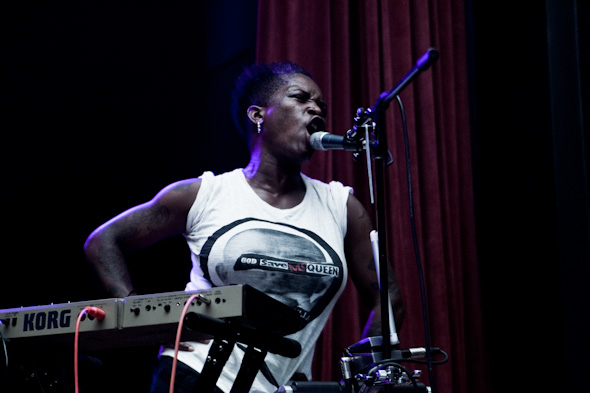 I haven't been able to get into Light Asylum's singles or videos, but I heard they're a must-see live and I'd been eager to catch their show. Toronto's Trust more than delivered as double headliner, as the bands share retro synth perimeters and hip, doomsy-gloomsy fans. 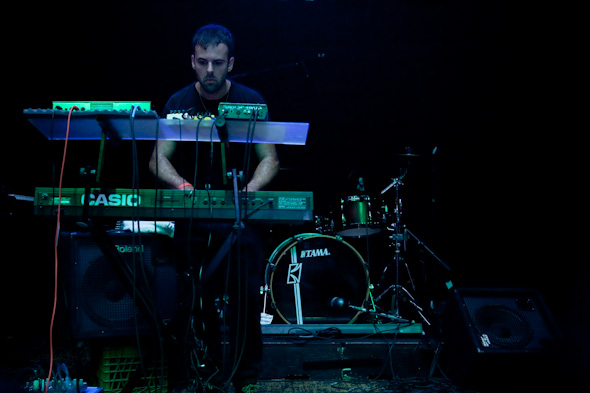 I'll make this quick: Light Asylum nailed it. While Bruno Caviello played simple yet deadly synth lines and worked at his gadget board, vocalist Shannon Funchess wailed, growled and sang in a dry, guttural baritone while beating her electric drum with wooden drumsticks, which she often waved like a flight attendant in the depths of Hell--if Hell's airport was a rave blaring electro music 24/7. That's what my notes say. It was hot.

Oh, was it hot. I was caught between trying not to pass out from the heat and rainbow strobes on the one hand and worrying about my sweaty stamp transferring from my wrist onto my white shirt (good move on my part, I know) on the other. This actually happened to me at a show last month and if anyone has tips to get marker off silk, please, please get at me in the comments. 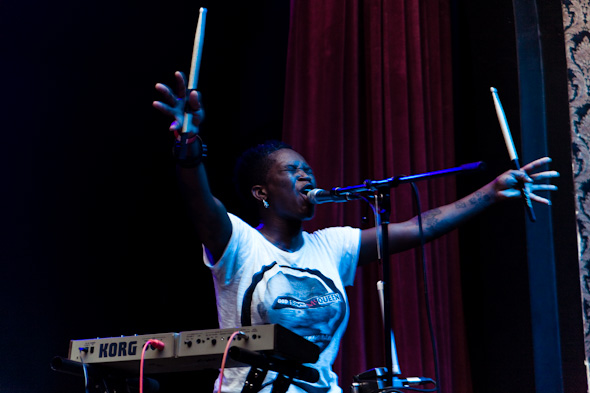 I don't know what Light Asylum played and every song melted into the next, but Funchess's energy, impassioned vocals and far out dance moves were awesome, and between the Brooklyn duo's punk vibe, the community-forcing heat (fans that drown in sweat together stay together) and the Great Hall's curtains and patterned wallpaper, it felt like a living room show. I'd see their brutal, sexy band again any time. 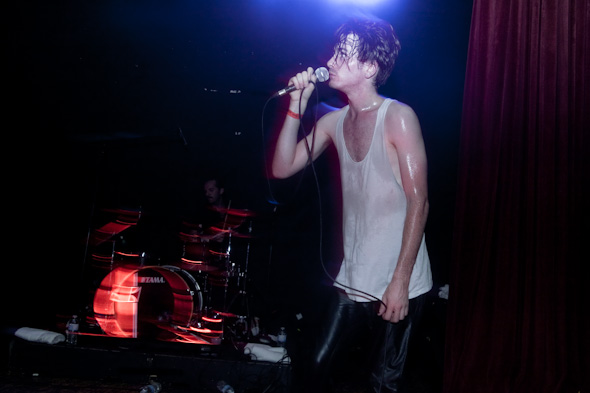 When Trust appeared I was at the front with my photographer: bad idea. Drug-scrambled teens were pushing and jabbing everywhere and everyone in their pursuit of the stage. Imagine a Justin Bieber concert plus black market pharmaceuticals, minus assigned seating and the presence of caffeinated-up chaperoning moms--chaos. I went up to the balcony. 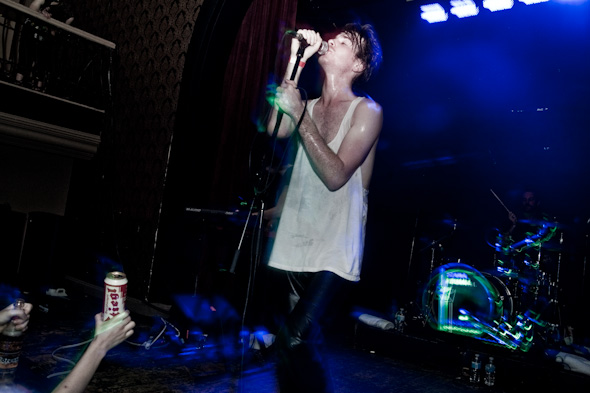 Drummer Maya Postepski was absent, replaced by some fellow I could barely see: the only light shone on vocalist Robert Alfons, who came on strong and spent the set dancing and tearing about the stage with his mic, matching Funchess's energy from earlier pummel for pummel. It was a great set that saw the perspiring audience dancing to heavily trance-infused synth pop all the way to the back of the house.

It might have been heat stroke but there was one song I didn't recognize from Trust's single or album, and that was my favorite - Alfons crooned the same repeated phrase over and over, making twisted and unearthly sounds as he sang; again, it was steamy as a Turkish bathhouse in there so I'm not sure this actually happened.

Meanwhile I tried to keep my rings from slipping off my clammy fingers onto the floor below the balcony, where teenage girls reached out desperately trying to touch Alfons, because this is what teenage girls do at shows. 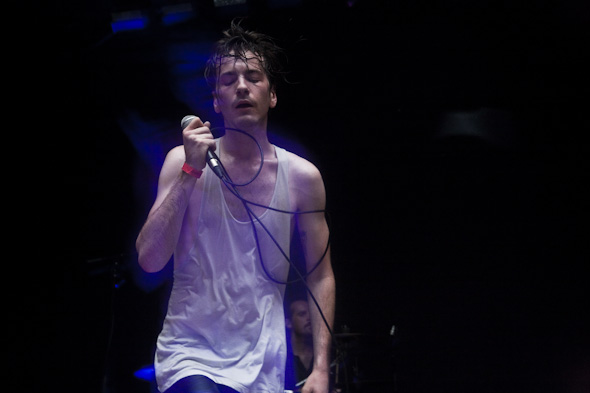 Afterwards, kids with dripping wet hair traded stories of crowd abuse in the street, and I went home and watched videos of Maltese puppies and thought about how weird it must be to be a popstar in Toronto in 2012.