Dirty Projectors mix with Purity Ring at the Music Hall

On Friday night, Dirty Projectors and Purity Ring played the Danforth Music Hall. Both bands brought with them a collection of soon-to-be-released songs to delight their fans with. 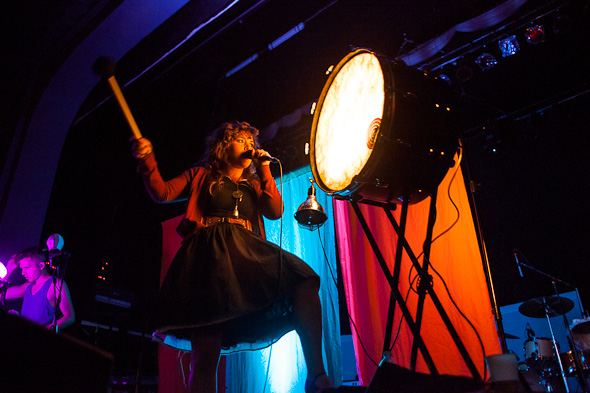 To say that I was excited to see Purity Ring open for Dirty Projectors after missing their NXNE set would be an understatement. Fortunately, the band delivered on all fronts. In addition to playing their four well-received singles, the duo showcased songs from their upcoming full-length debut, Shrines. The quality of their material is solid throughout, and like their unique twist on indie-electronica, the group has an equally captivating live show.

Corin Roddick, the group's producer and multi-instrumentalist, plays a custom built instrument that resembles a tree lined with glowing orbs. Each of the eight orbs on the "tree" lights up when touched and emits a sequenced sound of Roddick's choosing. So, for instance, on "Obedear," the orbs took on the role of synth, and Roddick delighted the audience as he started to improvise with the orbs, each of them lighting up magnificently as he gently tapped them with his drum sticks. 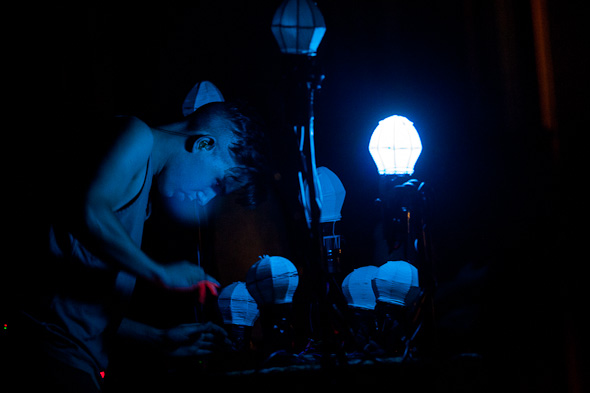 The sugary, sweet voice of Megan James was also pitch perfect, and the band did a lot to endear themselves to the audience. Before embarking upon "Obedear," James asked the audience to move and most of the audience obliged, with some even breaking down into a groove.

If there was one issue with their live show, it was that the band, shrouded in darkness for much of their set, was tentative on the stage. However, that's something that's relatively easy to resolve (in theory), and it must be said that really no other band out there doing what Purity Ring is doing right now. 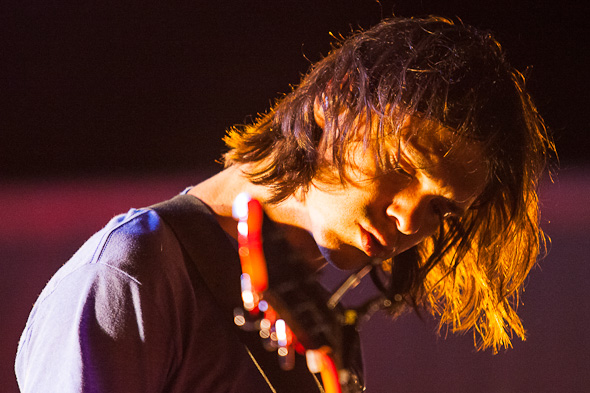 Of course, Purity Ring wasn't the only band with unreleased material to showcase, as Dirty Projectors is set to release the followup to Bitte Orca, Swing Lo Magellan, on July 9 (the entire album has been uploaded to Youtube, and can be heard here). As a result, the majority of their set consisted of new material.

The first song the band played, a tune called "Offspring Are Blank," is built on top of a hip-hop beat, and furthers the group's exploration into the world of R&B songwriting. As with frontman David Longstreth's previous work, the song evokes some pretty strange imagery. It appears that the song is describing a love affair between a snake and eagle, "And in the marriage of eagle and snake," and the result of that cross species mating, "The parents are fertile, but the offspring is blank."

Needless to say, the song's subject matter is hardly one that is considered traditional pop song fair, but, damn, was it infectious on Friday night. Halfway through the song, Longstrenth breaks into one of his signature instrumental freak outs as he sings, " He was made to love her / She was made to love him / And their offspring loved them." It was riveting stuff.

Another new song the band played, called "The Socialites," features backup singer Amber Coffman on lead vocals. The charm of the song emanates from Coffman's cute voice, and a delicate, summery finger-picked guitar phrase from Longstrenth. Unlike "Offspring Are Blank," the lyrics to "The Socialites" is more straight-forward, describing the hurdles and pitfalls of trying to integrate oneself into a ritzy social group. It's not quite "Stillness is the Move" good, but it gets close. 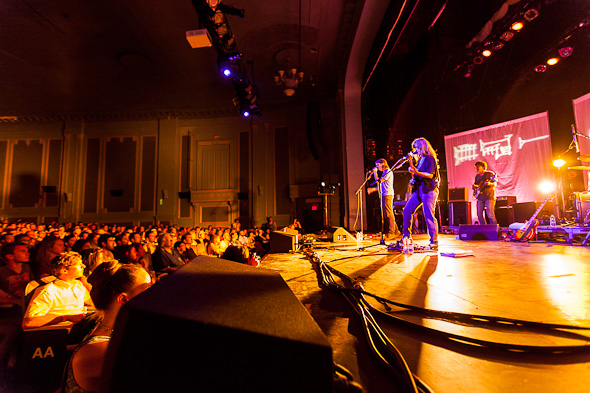 Thankfully, the band didn't neglect to play more familiar tunes, either. Old favourites like "Cannibal Resource" and "Useful Chamber" were well received, and the Solange Knowles approved "Stillness is the Move" received massive applause. It must also be said that the band has never sounded as good as last night.

Part of that must have been the handsome venue the group found themselves in, but also the fact that a personnel switch saw the band with a new drummer. Moreover for the majority of his guitar work, Longstrenth has switched from his signature Fender Stratocaster to a Gibson Les Paul, and it has paid dividends. The songs Longstrenth played with his Les were missing the ear puncturing treble that Strats are know for producing.

So, Friday night presented an opportunity to get acquainted with Dirty Projectors' newest material, and while it takes a lot more than one listen to get acclimated to Longstrenth's songwriting, what I heard on Friday night sounded promising, which is something we should all be excited for.

Stillness is the Move
No Intention
Unto Caesar