A gentle night at the Opera House with Destroyer

Night two of the Toronto Jazz Festival saw a very sold out Opera House play host to Vancouver's Destroyer. The eight-piece band appeared with no opening artist, but almost two decades of touring and dropping critically acclaimed albums has earned song-smith Dan Bejar a cult following, and the venue was packed. 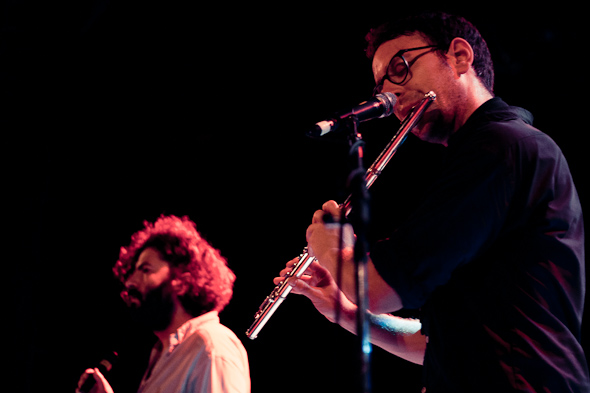 Jazz festivals are increasingly reaching out to artists who barely ride the fringe of even a non-purist idea of "jazz," but anyone familiar with Destroyer's 2011 sax-laden, lounge lizard of an album Kaputt knows that the band aren't far off the mark at all right now. Saturday's performance featured songs from Kaputt as well as older material, and plenty of sax and trumpet solo-ing, though naturally the ever-eccentric Bejar stole the show.

Bejar looked frail and more than a bit out of it, though one wouldn't have known just by listening - he never missed a note or an emotive inflection. In fact, most of the set was performed completely to the letter of the band's recorded material.

Yet the singer often seemed about twice his age, choosing to spend most of the night leaning on a short mic stand as though it were a cane, or sitting on the floor nursing a beer. I noted with some pleasure that Bejar seemed to have his stage movements down to a fine art: put the microphone back on the stand as quickly as possible, so as to spend more quality time drinking while listening to a soloist's jam or the band's full and dreamy sound.

The last time I saw Bejar live, he was eating a sandwich on stage while playing with The New Pornographers (I was there to see the opening band, but stayed for Bejar's antics), and Bejar made a point of retreating back into the wings whenever he wasn't required to sing. Hey, I wouldn't be too excited to tour with A.C. Newman these days, either. 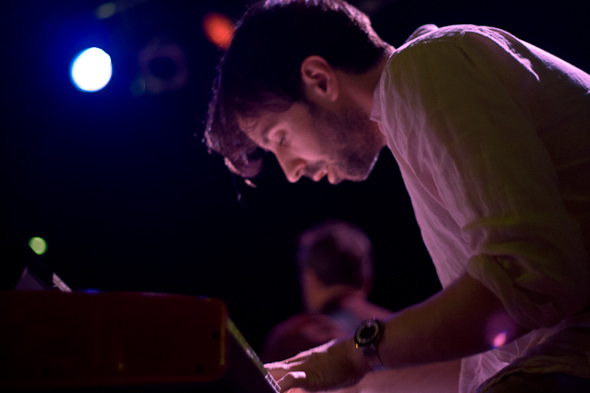 Bejar seemed much happier this time - happier than I've ever seen him playing as Destroyer, too - and he often smiled, looking like indie rock's happy Buddha. Though older songs like "Your Blues" and "Rubies" were highlights for me, it was the tracks from Kaputt that really shined in this context. All the players looked to be having a great time, and the sound was almost flawless. 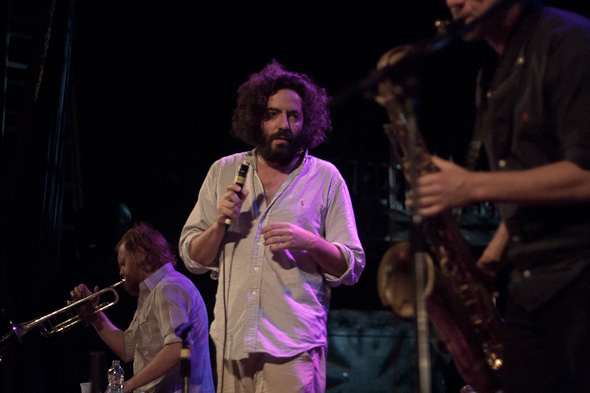 There wasn't much deviation from the album until, before "Suicide Demo For Kara Walker," trumpet player JP Carter began a long, patient freestyle noise solo, filtering his sound through effects while Bejar sat on the floor and looked on, perhaps with a bit of pride. It sounded brilliant and made my evening: I'd definitely go out of my way to check out Carter's solo project if he was in town.

Bejar rarely interacted with the crowd, introducing "Rubies" with a simple "here's an old song," looking at a group of barely college-aged boys yelling requests with some bafflement, and mumbling, toward the end of the show what I think was "I hope you're enjoying an evening with Destroyer." Which is exactly what the night was: the band had nothing too special up their sleeve, yet I think most of the crowd would agree that the performance was more than enough.