Tape trips with Not the Wind, Not the Flag

I saw Not the Wind, Not the Flag at Double Double Land on Thursday, and it was awesome. I wish you were there. I knew Colin Fisher and Brandon Valdivia would be bringing the psych at their tape release (yes, cassette tape release), but I had no idea how powerful the Toronto duo would be.

Not the Wind, Not the Flag have been playing in Toronto venues large and small for years now, but this was my first time seeing them live. Valdivia began their forty-five minute set by playing shrill notes on a wooden flute over Fisher's expert rhythm on the drums, and their improv started off with joyful intensity. 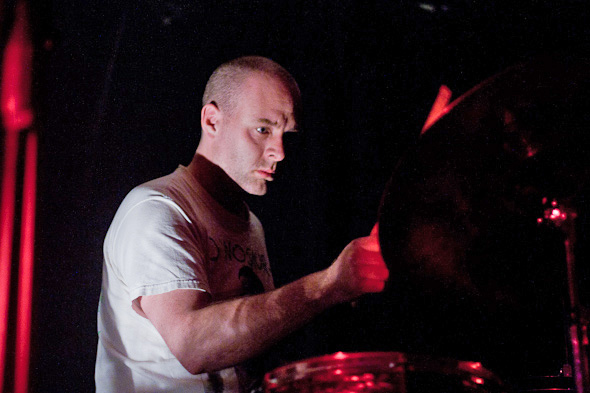 The drum beats never let up - even as the two players switched places mid set, allowing Fisher to coax what sounded like human yells through his guitar. Bells, maracas and random instruments were key players, and I doubt I've ever enjoyed a percussion based set so much. Fisher and Valdivia are highly skilled, and their improv eventually reached a deep psychic trance behind a wall of sound: music suitable for the most Holy Mountain of peyote trip film sequences, and captivating to see on stage.

With only a couple dozen fans in attendance, it was the kind of show where you want to apologize that there aren't more people there. I bought the tape; if you don't have a working cassette player, it's time to think about getting one, as some of Toronto (and beyond)'s most exciting sounds are being released through this medium. 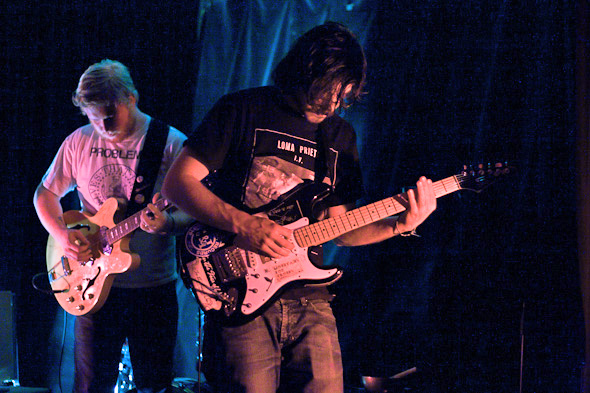 Earlier in the evening, Kalamazoo's Forget the Times warmed the stage with a minimal set up of two guitars and some pedals. Their drummer was absent, making for a much more restrained set than their recordings as they guided the audience through discordant, minimal, and moody noise and free psych. Yes, Kalamazoo is a real place. 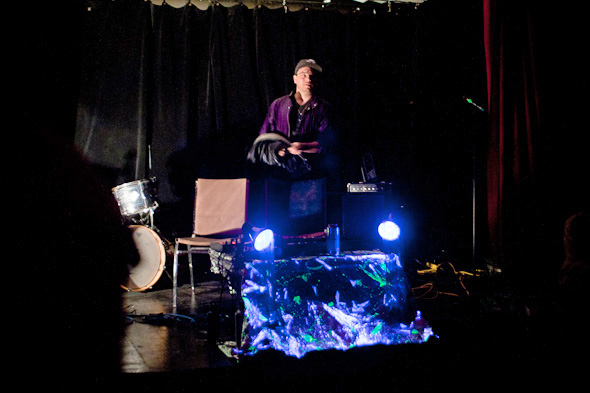 The evening's openers, Toronto's HVY WTR, played before a painted sheet and black-lights (great for atmosphere but a photographer's nightmare). Wolfgang Nessel (of local lo-fi dance heroes The Deeep - who, by the way, had a cassette on 100% Silk) and Vic Cheong were even more mellow than I expected; Cheong leaned over her mic, moaning like Alison Shaw on ketamine, while Nessel conducted dirty, crunching beats with only a flashing necklace to light his way. Their set was reserved, but dripping with basement disco flavor.

In closing, some words of advice: dig a tape player out of your grandma's attic, and if you've yet to see NTW, NTF play, this spring would be a good time to see them work their magic.