A modest sized crowd gathered early Saturday night to take in Cousin, a Toronto by way of Niagara Falls four-piece on the cusp of releasing its self-titled debut LP. While the album was cut in a couple manic late August sessions last year, it's only seeing release now; in the interim, working these songs out onstage, it's evident they've become a cohesive and confident live band. Showcasing the record by playing it front-to-back duringn their 40 minute set as part of the Young Lions Music Club showcase, they won over the audience, who gathered increasingly closer around the stage as Cousin continued playing. 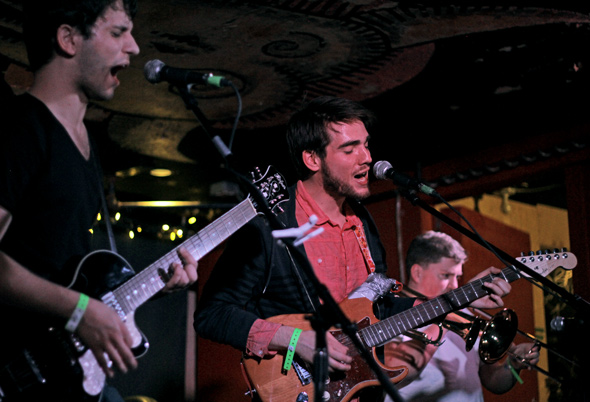 Led by songwriter/guitarist/vocalist Giulio Rocco, the band possesses a familiar sound that's executed well, thanks to impressive musicianship and idiosyncratic tinges to their songwriting. Drummer Adam Slinn was particularly impressive, utilizing flashy but never overpowering fills that structure obtuse pop songs such as the chugging "Jawbreakah" or the Pavement-meets-Big Star earworm "Lawnchair." Bolstered by two horn players for three of the albums tracks, the extra touch of brass gave a positive indication of what fuller arrangements could do to their angular, guitar-based sound.

They ended their set with the surfy "Chump," during which Rocco pulled off a shambly yet soulful solo that felt like it would break at any moment, but never did. This sense of spontaneity can be said for the band as a whole, but when the songs are this good that sort of effortless looseness can only add to their performance. Look for them around town when the album drops in a couple months, they're not going to go unnoticed for long. 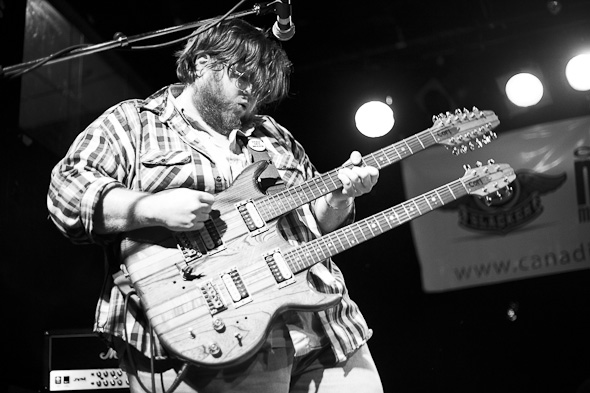 Kingston's PS I Love You were next up on my radar, playing a high-profile Windish Agency showcase opening for the currently hot tipped Cloud Nothings. Walking into Lee's, it struck me that it had been a year and a half since I'd last seen the band, performing a packed instore at the venerable Soundscapes. There, they had been a lean and mean two-piece, anchored by Paul Saulnier's vaguely Frank Black-esque yelp and the steady rhythms of powerhouse drummer Benjamin Nelson. Here, they were assisted by an auxiliary musician filling out their sound with bass and extra guitar who also served to fill out their stage presence. 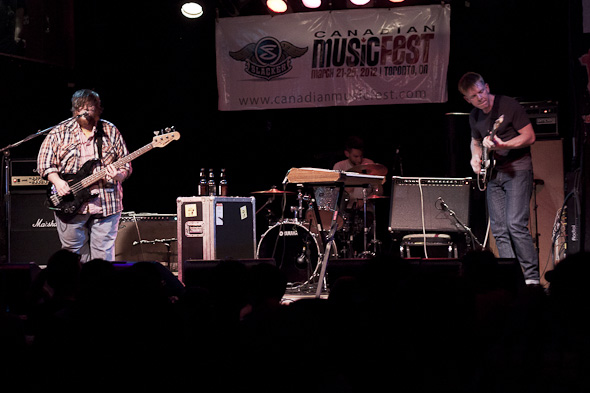 The majority of the set consisted of material off their upcoming sophomore album, Death Dreams, out on Paper Bag Records in May. While the set was quite enjoyable, some of the songs seemed to suffer from a lack of distinction on first listen. That said, their 2010 debut Meet Me at the Muster Station took some repeated listens to properly sink in, so that could very well be the case here. The new tracks continued on in the tradition set by the first album of crunchy pop songs wrapped up in a haze of distortion and guitar heroics, tied together by Saulnier's distinctive voice. Muster Station highlight "2012" served as one of the few throwbacks to that LP, fitting cohesively into the set of new tracks. Utimately, PS I Love You delivered a good set, nearly filling Lee's to capacity and certainly building anticipation to give these songs another listen upon official release.

PS I Love You photos by Brian Morton 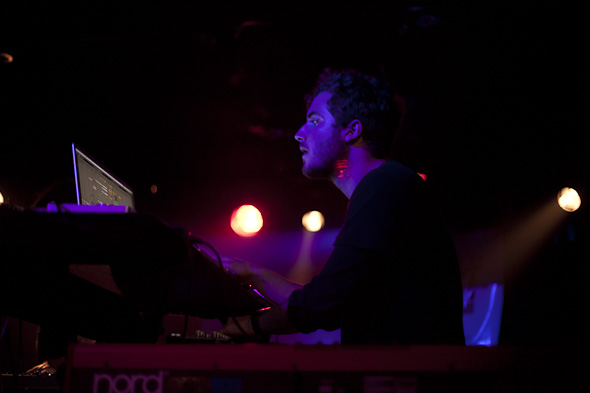 Certainly one of the most buzzed about sets of the festival, Chilean-born, New York-raised electronic artist Nicolas Jaar was set to make his Canadian debut at the stroke of midnight at the Revival. The fact that Jaar has garnered so much critical acclaim so quickly since the release of his first album Space is Only Noise last year, coupled with a venue I'd never been to, piqued my interest for the show, so I made sure I got to the College Street club nice and early to ensure entry.

Unfortunately, arriving on time wasn't on Jaar's agenda; instead, a perfectly competent but eventually tedious DJ filled time in the packed venue as nothing of particular importance took place. It was difficult to tell, though, as the club's sightlines reminded me of being stuck at the back of the cavernous Sound Academy. The instruments - rigs of synths, pedals, and mics - appeared to have already been tweaked accordingly, with no roadie in sight and a sold out crowd attempting to coax Jaar onstage with chants and cheers. 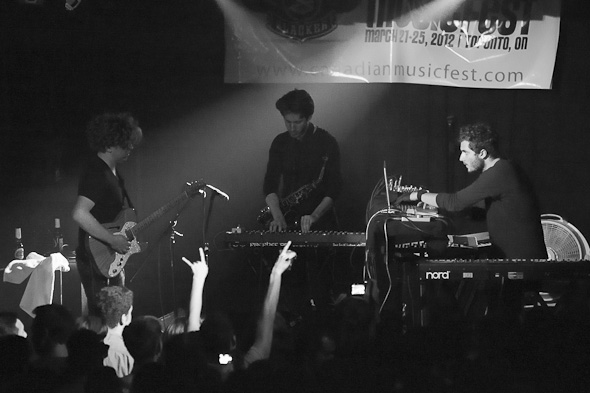 Upon finally taking the stage over an hour and a half past his scheduled set time, Jaar greeted the crowd with a cordial hello and thanks, to which the audience responded with adoration. Flanked by two musicians, on guitarist and saxophone respectively, Jaar triggered beats on a laptop and added live keyboards to his bass-heavy set. Rather than sticking to performances of individual tracks off Space is Only Noise, Jaar and his band played a continuous 65-minute set that blurred together his material, making one song indistinguishable from the next.

While the addition of the element of live instrumentation was interesting in conjunction with the monstrous beats, I couldn't help but feel let down that much of the nuance, atmosphere, and sharp songwriting of the album was sacrificed to make room for a more streamlined sound. It's entirely possible that after waiting two hours and having missed a few other bands around the city, I was simply exhausted and exasperated, since much of the crowd seemed to be having the time of their lives. Closing with reworked versions of "Too Many Kids Finding Rain in the Dust" and "Space is Only Noise if You Can See," two of the best tracks from the LP and the first I had been able to distinguish all night, Jaar and co. momentarily hit their stride, Jaar's distinct baritone vocals sounding great layered on top of the various instruments. However, it was too little, way too late, leaving me to look forward to Jaar's next studio output but not particularly itching to see him live again.