Wednesday served as the official start of the 30th year of Canadian Music Week, and what better way to begin a five-day stretch of music and club-hopping than an intimate performance from the Joel Plaskett Emergency and Ben Caplan high atop our country's national tower?

The evening's festivities were held in Horizons restaurant, 111 stories above the ground. A small makeshift stage was set up between the two bars and seating areas, the restaurant itself comprising about a third of the viewing deck level. After a requisite hour or so of the crowd collectively marveling at the spectacular view and atmosphere, Ben Caplan took the stage armed with just an acoustic guitar and a beard hefty enough to have made Karl Marx blush. 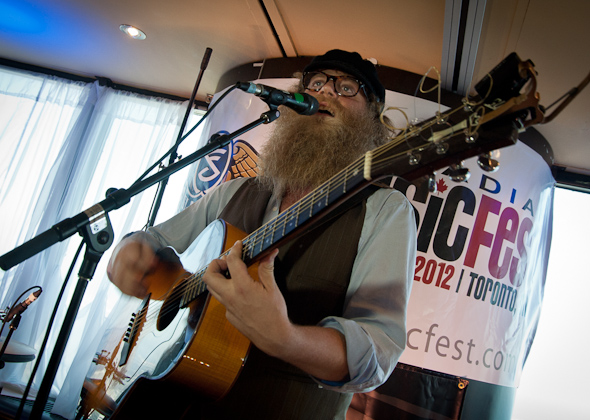 Without the accompaniment of his band the Casual Smokers, who've been relentlessly touring the country since the release of In the Time of the Great Remembering last October, many of Caplan's imagery-rich songs were rendered stark and subtle by the solo acoustic arrangements. The space left by the absence of his band's eclectic instrumentation, though, was compensated for by Caplan's deep, theatrical boom of a voice, almost like an east coast Tom Waits with lungs only half full of bourbon. 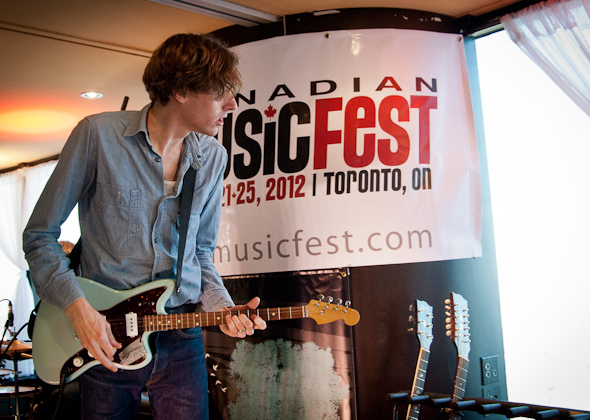 After a brief break, Joel Plaskett emerged onstage with Dave Marsh and Chris Pennell of the Emergency in tow. Launching right into "You're Mine," the ebullient, stomping opener of their new LP Scrappy Happiness, it was clear from the get-go that the trio was going to bring their best for such a unique venue. The sessions for Scrappy Happiness consisted of Plaskett and his band recording and producing one song a week for ten consecutive weeks, releasing them individually with the hope to create a coherent, off-the-cuff sounding album as the end result. They pulled it off, and on tracks such as "You're Mine," complete with the refrain "It's 1995," Plaskett sounds energized and spontaneous in a way that recalls Thrush Hermit, his incredible 90s band which briefly reunited two years ago. 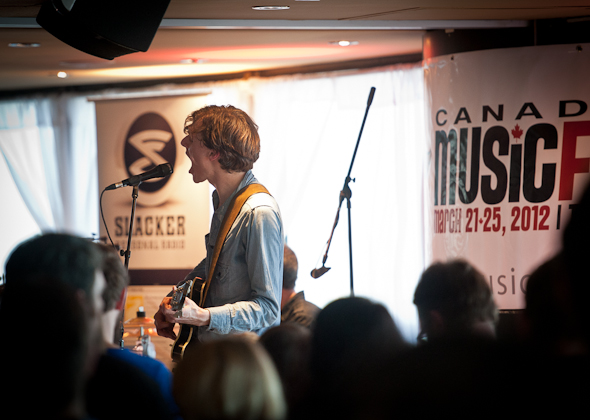 Plaskett and the Emergency jammed a lot of the newer songs out, stretching the Crazy Horse-tinged "Lightning Bolt" far past its running time on record. Older tracks, such as the currently seasonally inappropriate "Snowed In" from Ashtray Rock were unaired as well, much to the enjoyment of the audience. Ever the showman, the performance was complete with guitar heroics from Plaskett, although even he had to stop at one point to point towards Toronto Island, directing a crowd's attention to a plane taking off directly in the panoramic view behind the stage.

While "Nowhere With You," Plaskett's most well-known song, predictably closed out the main set, the show's highlight came earlier with "Harbour Boys," a new track which Plaskett performed solo with a twelve-string acoustic. With a familiar sounding melody and an immediately grabbing refrain, it's usual fare for Plaskett's songwriting but exemplifies the best of his pop sensibilities. And unsurprisingly, it sounded great looking down onto a Toronto about to explode with live music. 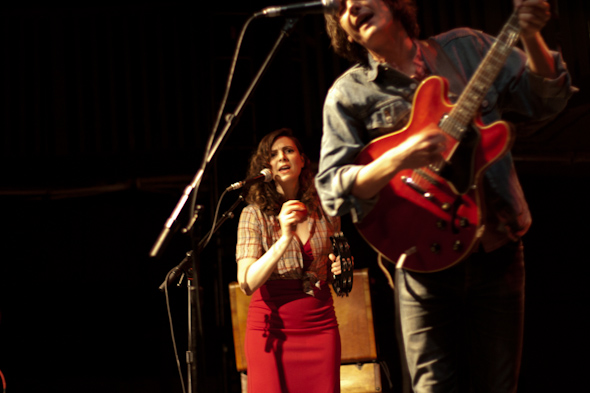 Despite only having a modest crowd in attendance to watch them, Michael Rault and company made the best of the of less-than -ideal-situation, as the group quickly assumed a rockabilly groove that got some of the audience dancing and my foot keeping time. This is definitely a group I'll look out for in the future. 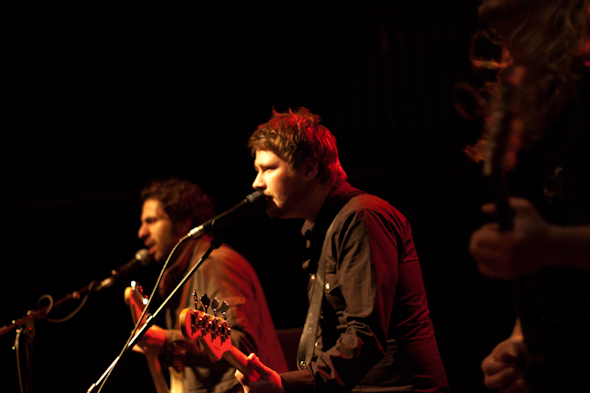 One would expect a band fronted by The Dears guitarist Patrick Krief to have its fair share of guitar heroics, and Krief did not disappoint, as almost every other song he and his band played included an extended guitar solo. Still, something about the group's more modern and droning sound did not appeal to me, though a lot of the rest of the audience seemed to love it. 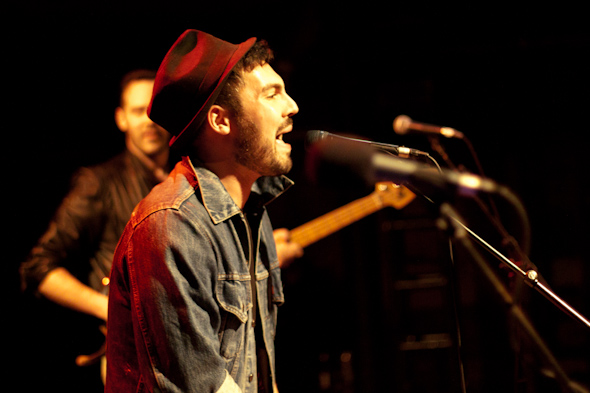 On the third occasion in which I've seen Young Empires perform, the band took their already concise set and reduced it even further. The result was a performance that contained only their best material. Combined with the ample energy and enthusiasm with which the four-piece took to the stage, the group managed to quickly win over the audience that had come to check them out. Young Empires has been getting a lot of attention from the Canadian music press recently, but last night proved that all of it is well-deserved. 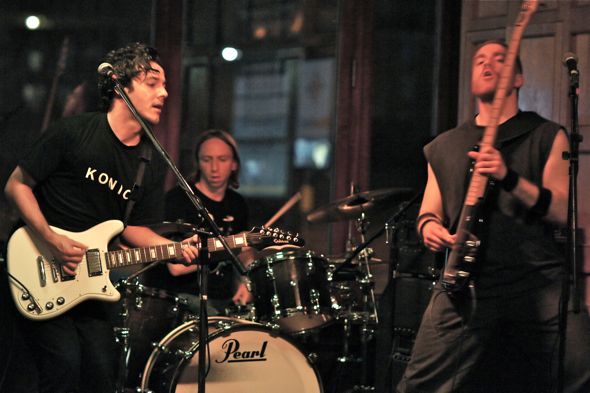 Kyshera rocked The Gladstone's Melody Bar last night with a blazing set, in spite of a small turnout on the first night of Canadian Music Fest. The band is a three-piece from South Wales, which knows how to create a funky cacophony with just guitar, bass and drums. 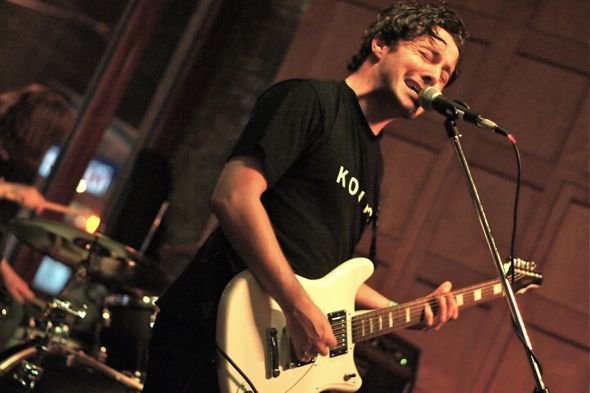 Lead singer James Kennedy lightheartedly egged on all 10 of us in the audience to clap along at the end of each song. It felt like we were being treated to our own private show. Kyshera looked rather menacing, prancing about the small stage at the front of the bar, perhaps better known for drunken karaoke. Catch them at on Friday at 12 midnight at Global Village Backpackers (460 King St. W.) and Saturday at 11 p.m. at Cherry Cola's Rock N' Rolla Cabaret (200 Bathurst St.).

Writing and photos by Roger Cullman 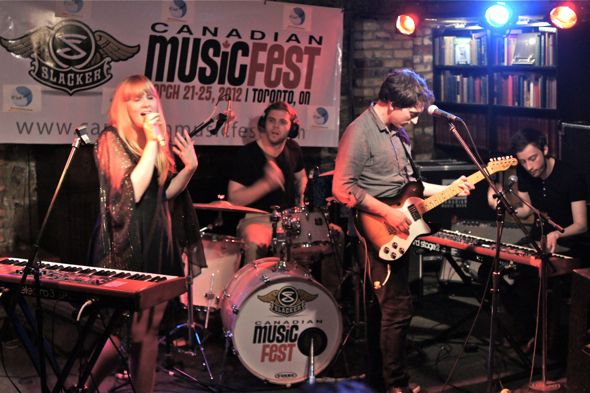 After getting an earful of heavy rock, I scootered down to C'est What to see what Lynzie Kent has been up to. She was one of my favourite singers with God Made Me Funky several years back. She's honed her style and has a great new catalogue of songs that went over well. 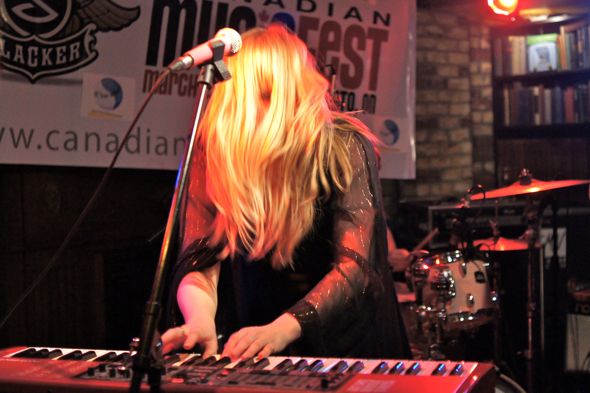 Before Kent went on stage, I caught Newfoundland's Repartee. They're a quaint quartet with quirky '80s synth sounds and led by an animated lead singer. But it was Kent who stole the stage for me. 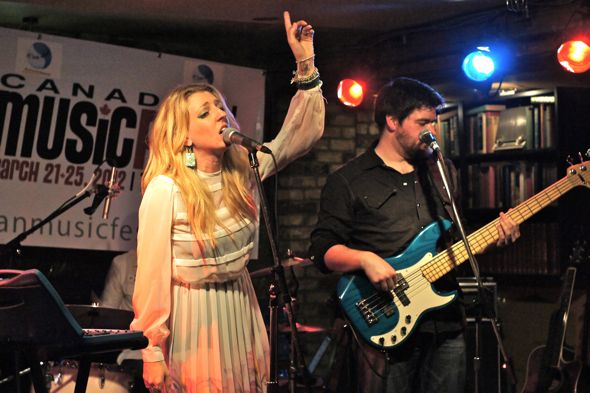 She was backed by a bass player who notably could sing higher than her on harmonies. They have a really catchy song that likens bubble gum to a new relationship. Having amassed over 11 million views on YouTube, it's just a matter of time before she breaks out and headlines much larger venues. 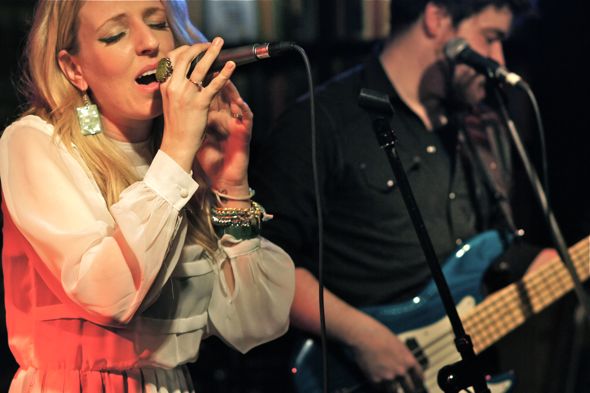 Writing and photos by Roger Cullman