Five of Toronto's most interesting up-and-coming bands got together Friday night at the Great Hall for a celebration of their mutual recording home, Daps Records.

Started by Hooded Fang's Daniel Lee and April Aliermo, as well as Ian Chai, the label has been getting local and national attention as of late for the quality of its ever-growing roster. The night was touted as the first live performance by self-proclaimed "celestial golden gods" PhÃ¨dre (actually made up of both Lee and Aliermo, in addition to Doldrums' main man Airick Woodhead), who have been on the receiving end of a lot of hype for their recent self-titled debut album and its insanely catchy single, "In Decay" (complete with a very NSFW video).

Hooded Fang, Doldrums, Moon King, and L-Con rounded out the bill — no strangers to Toronto stages. Nonetheless, the headlining spot was graciously turned over to PhÃ¨dre for the night, and the onus was on their electro-based pop to impress following sets from more seasoned acts. 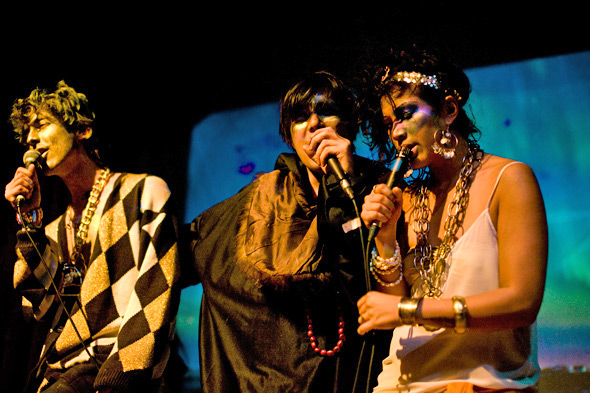 So did they pull it off? Well, let me preface that with a couple of thoughts. Firstly, PhÃ¨dre's debut LP is probably my favourite album of the year thus far. The lurching, unconventional beats reveal themselves to be red herrings disguising some of the better pop songs I've heard in a long time. The vocal melodies of the three band members are top-notch, and the oddball synth effects scattered throughout always serve in the interest of the song. Secondly, let me say that I generally dislike when bands rely heavily on samples and prerecorded music as opposed to recreating recorded textures in a live setting.

The theatrical sound of the album paired with a stage setup that seemed to be made up of more props than instruments kept things intriguing as the crowd waited for PhÃ¨dre. Setting the tone by emerging from a white sheet projected with images of a woman with her legs spread open, the band took the stage to the propulsive, hooky "Aphrodite." The set found the members clad in costumes that couldn't have been more different from the plainclothes the three wore earlier onstage with their other bands. A number of women in gold body paint and glitter danced at each side of the stage (admirably never breaking character) while the band sang, danced, and generally seemed to be having the time of their lives. 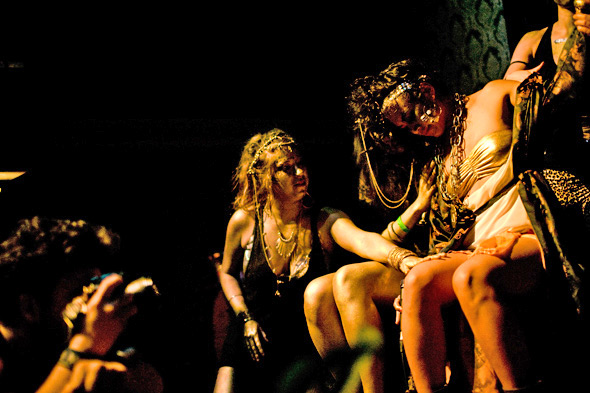 Throughout the set, despite PhÃ¨dre having only vocals and a mixer at their disposal, the audience was receptive to their absurd antics not only for the ridiculousness of the spectacle, but more importantly because of the sheer quality of the material. Blown-up condoms filled with glitter were thrown, cheeseburgers wrapped in gold tissue paper were distributed to the audience, and a stage invasion and en masse singalong took place for set closer "In Decay." Overall, the set was certainly a strange sight, but musically was anything but uninvolved electronic noodling — band and fans alike looked to be reveling in the decadence of PhÃ¨dre's unhinged stage show. 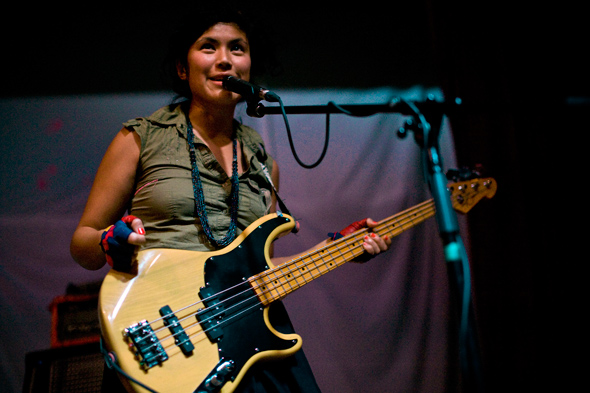 Fresh off a jaunt to the UK, Hooded Fang appeared as a lean four piece, consisting of only guitar, bass, and drums, pared down from their usual seven-member lineup. Gone are the horn crescendos and glockenspiel flourishes of their early work, now replaced with a sprightly, jangly take on surf-rock. With the majority of the set drawn from last year's Tosta Mista, this new stripped-down style presented in a live setting brought the band's impeccable melodies to the forefront, effortlessly getting the crowd dancing — no small feat in Toronto. Any nods to the group's early AM pop-influenced sound found on Album were nowhere in sight, but when they closed their set with the woozy slow-burner "Den of Love," no one really seemed to mind — it was obvious that the core members of Hooded Fang are just as adept at being musical chameleons as they are sticking with a tried-and-true pop formula.

All three of the other bands impressed as well, in particular Doldrums with a dance party set off by their combination of electronic drums and a traditional drumkit. The show was billed as Volume 1 of the Daps Record Revue, and the fact that it was such a success certainly seems to drive home the fact that we'll be hearing a lot more from PhÃ¨dre and their labelmates in the near future. It remains to be seen whether the glitter will ever come off my boots.