On Saturday night I hit the Los Campesinos! show at Lee's Palace - or, I hit the door, where I was told I had to ditch my camera, a rule that's becoming more and more enforced at Toronto venues. I weighed my options - go home, miss the openers, and return (doubling the night's TTC fare), or bail in favour of the tour's second Toronto show, which I planned to attend anyway. I chose the less expensive option.

Sunday night I returned, sans camera, and found Parenthetical Girls sound-checking. Wait - they were starting their set, a half hour before the advertised time. In the dark, as Zac Pennington's voice began to warble, then gain strength, I counted myself lucky. I was excited to see Parenthetical Girls, and I'd almost missed them twice. 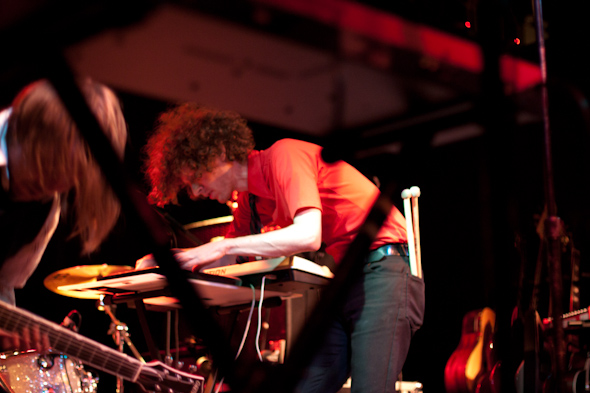 The photogenic Portland four-piece appeared very humble as they began "Sympathy For Spastics" for the thin crowd, lit by projections showing various women on film from Shelley Duvall to Jackie Kennedy, but as they broke into "Entitlements," Pennington began to walk the limits of the high stage, perching on one precarious edge after another, confident and charming even before a middling audience.

"This isn't in the palm of my hand like last night," Pennington claimed (damn). He introduced "A Song For Ellie Greenwich" by saying he'd cut his extra-extended mic cable in four places performing the song on Saturday (oh, my heartstrings), then jumped into the crowd to dance, pose, and leap back on stage, where he dropped cymbals and other clatter-makers from high above. The ultra-twee performance engaged the crowd and let the band's experimental side shine, though a falling cymbal which nearly dashed an audience member was a touch darker than even morbid Parenthetical Girls intended. 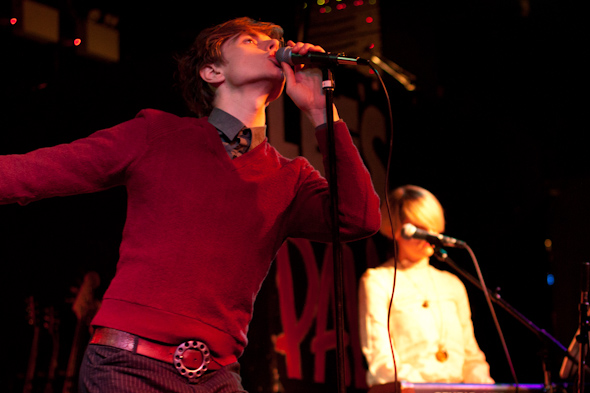 Between songs, Pennington told tour stories, dedicated to his role of crowd warmer. He continued his cat-like coverage of Lee's, crawling above the backstage area, drumming on random surfaces, dancing and pushing in the crowd, and even tight-roping his way down the hardly study bar counters that jut from the Lee's stage. As Pennington gyrated, paced, and belted through "Evelyn McHale," "The Pornographer," and a highly provocative "Young Throats," I hoped for a chance to see the band play in an even more intimate setting someday soon. The concert's early-goers were entertained, and I thought my partner phrased Parenthetical Girls' magic well: profoundly sexual. We agreed we hadn't seen such powerful stage presence in a long time. 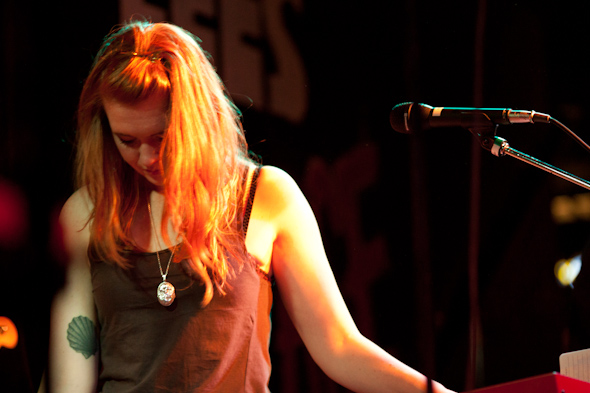 After an intermission, loud music played - Wales' Los Campesinos! introduction music - until all seven members emerged and began their catchy recent single, "By Your Hand." I was immediately reminded about how much I don't get the group's sound. I'm all for dissonance, but their disharmonies strike me as more annoying than interesting, and I find their simplistic, juvenile lyrics reminiscent of My Chemical Romance.

Gareth Campesinos! (yes, every band member has adopted Campesinos! as their surname) has a swagger and could be called impassioned, and some fans up front were bopping, but most audience members were content to stand around, and, Sunday or not, I felt Los Campesinos! were going through the motions. Tellingly, the set's highlight was "Death to Los Campesinos!" a track from their first album. The band seemed to wake up, and I was reminded of the New Pornographers show I attended last year in which early-album material marked the only moments the mega-group seemed pleased to be on stage. At least eccentric Bejar was present then, while here, no member offered anything special. 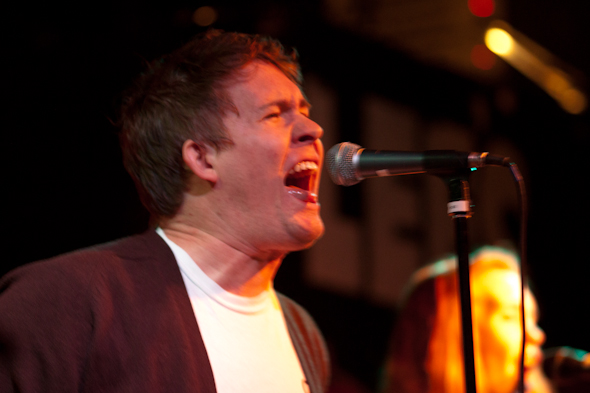 Parenthetical Girls' introduction to Los Campesinos! as "delightful people, a pleasure to tour with" seemed apt. I'm sure the Campesinos! family are very nice, so I'm glad I don't know them and can listen without bias. As Gareth and the other shiny Campesinos! sang "the world doesn't love you" in bratty unison, I felt like giving them the finger: clearly this music is not for me. I left satisfied that a chance to see one band perform brilliantly on a Sunday evening in January is enough.