Fans flock to the Garrison for Yamantaka//Sonic Titan

Entering The Garrison just after 9 p.m. on Saturday night, a line of potential concert goers were informed that the Yamantaka//Sonic Titan gig was definitely going to sell out - it was just a matter of when. Despite sheets of ice covering sidewalks and brutal January winds, the hype surrounding Y//ST combined with a solid line up of lo-fi openers had made the show a hit. 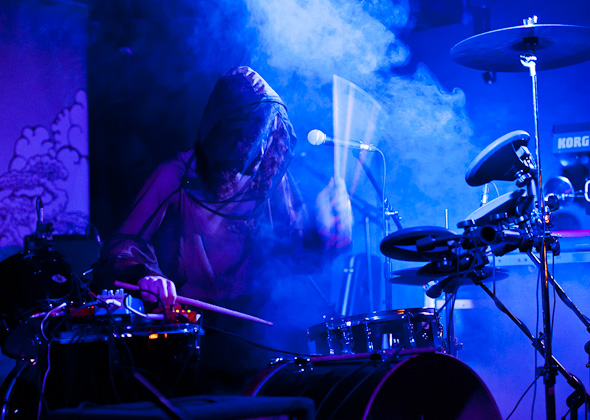 Long haired, hooded opener Sexy Merlin began at 10 p.m., alone with a mic and some pedals before a drum-kit. Aside from the appeal of looking like fabled wizard Merlin, SM's industrial beats and effects-heavy vocals made for surprisingly accessible and danceable lo-fi jams.

U.S. Girls' Megan Remy appeared next, concentrating deeply at first as she built beats and melodies via cassettes and numerous dials and pedals: looping accompaniments for her bellowed, distorted-to-the-extreme rockabilly vocals.

The best way to imagine U.S. Girls live is to picture noisy, reverb infused lo-fi karaoke, accompanied not by CD instrumentals but by ominous sounding DIY beats and loops, and channeled not in drunken camaraderie but rather in a fashion reminiscent of someone singing alone in their room with private, desperate abandon. Remy lets go like no one is watching, face distorted with passion; hinting an awareness of her audience only through occasional, steady glances over the room.

This doom-karaoke vibe is most evident when Remy is performing covers — like her mid-set rendition of "Down in the Boondocks," or her 2011 recording of "The Boy is Mine" — but it translates aptly through her own material too: opening beats of her single "Island Song" drew cheers. To me, the transformation of bedroom lo-fi spirit into live performance art would be appealing enough, but considering U.S. Girls' capability to write catchy, moody compositions and sing with the passion (while hitting the all notes) of a 40's pop icon, Remy creates a unique and worthwhile experience. 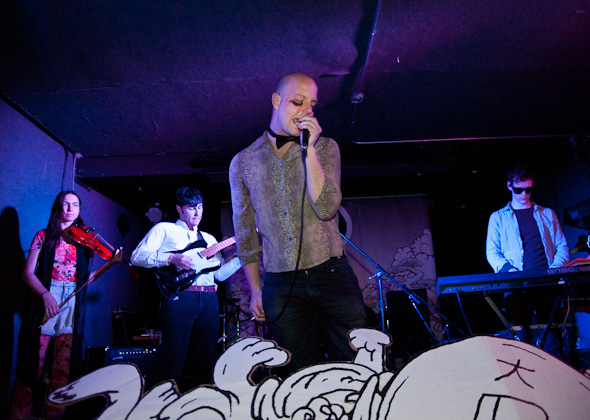 Montreal's The Pink Noise took the stage next. Saturday marked their first show as a five piece, and frontman Mark Sauner's no-wave, shouted monotone punk vocals were aided by synths, drums, guitar, and alternately violin (plucked, strummed, and bowed) or bass. The night's lo-fi dance vibe continued, though the growing crowd was tepid in spirit. 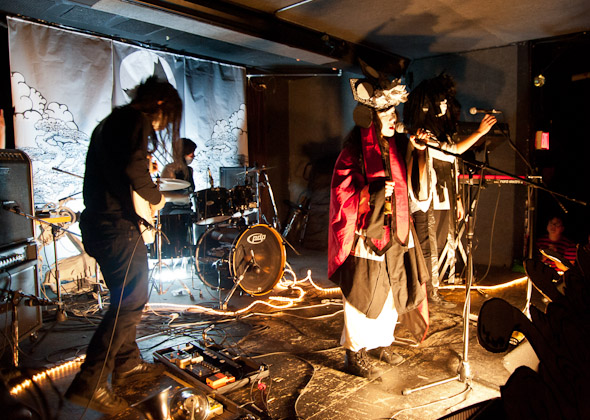 The Garrison was packed by the time Montreal/Toronto's Yamantaka//Sonic Titan started rumbling. The "Noh-wavers" began a long, thundering introduction, while first a costumed band member in large Triceratops-like costume lurched on stage, then two figures weaved through the crowd beneath huge homemade dragon heads. 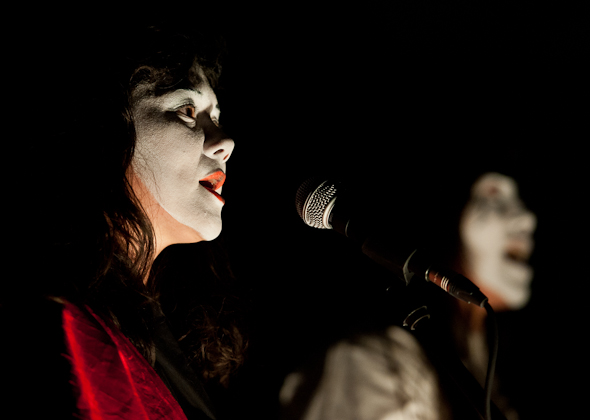 Eventually the lights went up and two costumed Y//ST members came forward to chant and sing. All Yamantaka//Sonic Titan-ers wear face-paint on stage, and the band hand-make their elaborate costumes and backdrops; I'll let the photos speak for themselves. Garden lights blinked while the boisterous crowd cheered the band's theatrics. 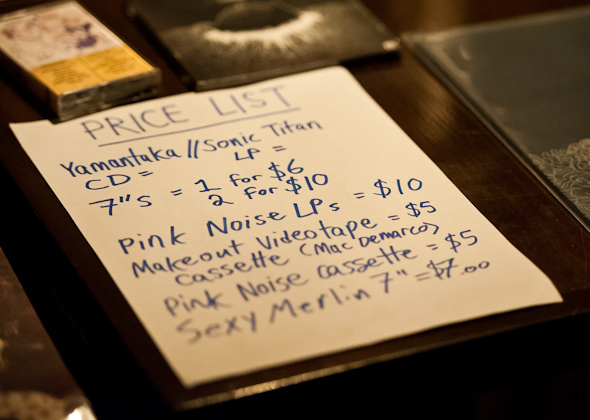 The audience seemed familiar with the songs, but due to what was likely unfortunate mixing, the operatic vocals were barely audible anywhere in the venue aside from occasional, faint shrieks; fans who came in pursuit of entertainment rather than sound were probably the ones most satisfied. From what I've read about Y//ST, their multitudes of influences, theatrics and genre-bending would interest me if taken in an ambient, concentrated, and vocal focused direction, but their Saturday performance made it evident they're following a prog-rock, Gwar-esque path, which will definitely win them a greater fan-base (as apparent already).