The Rural Alberta Advantage end their year with a bang

Perhaps the greatest spectacle in live music is when a band plays the last show of their current tour, or of their career. With no obligation to wake up the morning after and continue on to parts unknown to play yet another concert, a band is free to expel all its energy in one last bid at greatness. No, the Rural Alberta Advantage are not breaking up, but they certainly played like it was their last show for the foreseeable future (last night marked their last concert date of 2011). And the results? Well, they were nothing short of astonishing. 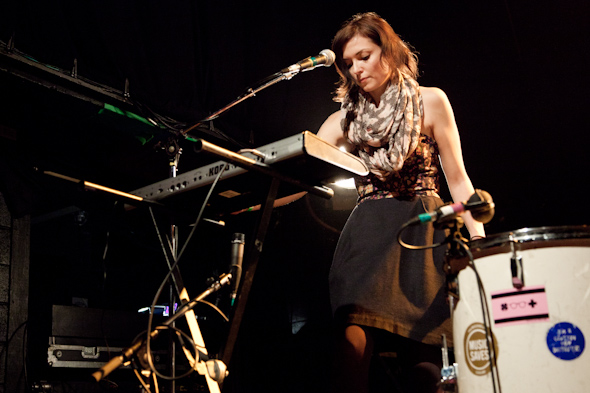 The trio started their set with "Luciana," "Muscle Relaxants," and "Don't Haunt This Place." "Don't Haunt This Place" was an early highlight in a night full of highs. According to Nils Edenloff, the band's lead vocalist and guitarist, the group's been together for the better part of six years. Given that fact, one would think that they might be becoming tired of some of their older material.

Last night, however, that wasn't the case at all. "Don't Haunt This Place" saw each member contribute an integral part to the song. Edenloff's voice was at its passionate best, Amy Cole delivered a superb vocal performance that really made the pathos of the song palpable, and Paul Banwatt, the group's drummer, pounded his kit with Grohlesque fury. In fact, throughout their 24 song set, the band reserved some of their most enthusiastic and passionate performances for their oldest material — much to the delight of their fans gathered at the Phoenix. 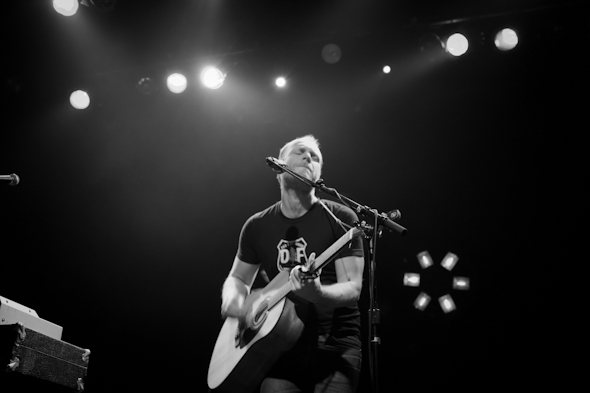 A constant and always interesting fixture at every RAA show I've been to is the selection of covers that Edenloff decides to play. Last time I wrote about the band, I spoke highly of Edenloff's rendition of Survivor's "Eye of the Tiger." This time around, the focus was exclusively on songs written in Canada, though, as always, the singer's chosen material was on the eclectic side. The first, and perhaps the most interesting of his covers was a reinterpretation of "Maybe Tomorrow," a theme song from an old TV show called The Littlest Hobo.

According to Edenloff, the show was an important fixture in his childhood, and is about a stray German Shepherd that wanders across the country helping people in need — a kind of Canadian Lassie, if you will. Listening to the original this morning — which, of course, can be found on 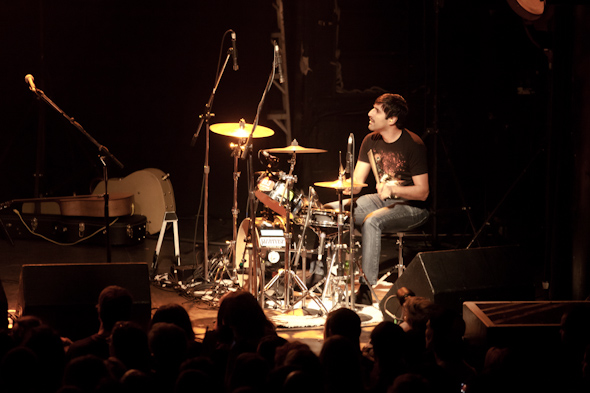 Youtube — the song comes off as quite quaint, but in Edenloff's hands, the refrain of "Maybe tomorrow, I'll want to settle down / Until tomorrow, I'll just keep moving on" turns into an earnest and nostalgic trip through a lost fragment of Canadiana.

The concert began to approach the sublime as the band returned to the stage to play an encore. After a brief interlude between playing "Stamp," the last song of their initial set, and returning to play their encore, the group asked the audience, "It's our last show of the year, so we're just going to play as long as we can. Is that all right?" All told, by my count the band's hour-and-a-half set left them with little original material left to play, with one song from each of their two albums being left off the docket, respectively.

Long encores are, of course, great, but that wasn't what made the encore so special. After finishing "The Dethbridge at Lethbridge," Edenloff jumped off the stage and led the rest of the band to the Phoenix's side bar. All three members climbed up on the bar and together they started an unplugged rendition of Departing's finale, "Good Night." After some brief heckling, the audience collectively quieted itself down, and were it not for the band's playing, you could hear a pin drop in the Phoenix. It was one of the moments you wish would happen at a concert, and for once it did. I can't think of a more fitting way for the band to close out 2011.