Montreal-based artist Colin Stetson is the focus of the third instalment of my Polaris Music Prize preview/interview. On his nominated LP - New History Warfare Vol. 2: Judges (his second) - Stetson demonstrates his horn prowess. Armed with his massive bass saxophone, he produces a most natural and spontaneous blend of layered compositions; all songs on Judges were recorded in one take. It's all bare notes, a visceral music that penetrates and lives on its own accord.

Below, read Polaris nominee Colin Stetson's answers to my set of questions.

Why do you think New History Warfare Vol. 2: Judges stands out among other albums from Canadian musicians this year?

I think that because of the nature of how I make my music it tends to stand out among pretty much everything. Not many solo saxophone records kicking about these days. That being said, I don't hear it as being as "out there" as some people say, though I suppose I'm a bit biased.

What was going through your mind when Judges was selected for the long list? And then when it reached the short list?

I had already been given a heads up about the long list, that it'd probably be selected, so when I did I was happy, but not completely surprised. It was really a great feeling to be a part of that list which was comprised of so many of my friends and colleagues, being recognized alongside them all was a huge honour. As for finding out about the short list, that's when the shock set in! And I think I speak for most people in Canada when I say that I was surprised to see Judges up against The Suburbs in the Polaris top 10! Really though, it's been such an honour and a pleasure to be recognized alongside all of the records on the short list. It's about as warm a welcome to Canada as I could have ever hoped for.

How would you describe the initial impulse that led to the making of this album? What is the central feeling or spirit behind Judges?

Judges is the second chapter in a trilogy of records that I'm making. Vol.1 is the story of a people lost at sea, a drifting, churning search for something to hold onto. It is an aqueous thing which in my mind deals with themes of birth and creation while Vol.2 is a solidification of ideas and imagery and the isolation of a single narrative. It's more or less an exploration into themes of isolation, specifically the fragile balance between fear and transcendence. It is a comment on the simultaneously terrifying and glorious aspects of consciousness, that to be a conscious being on this earth is ultimately (and universally) to be alone. This of course is a source for beauty as well as fear and what I hope I've conveyed with this music.

What sorts of things come up when you listen to this record? And which track from this LP should people (who have never heard of you before) listen to - a track you feel represents the album as whole?

Dark places, recesses in memory and in expectation which spin downward and fearful as well as those of peaceful contemplation. Pride sometimes, in what a life this record has had in the world so far. The tracks for me that represent the main themes of this record are "Judges" and "Home" although to get a sense of my sound I usually suggest "The Stars In His Head".

Can you describe the process of making the LP? What were some of the things you learned while making this record and at what point during the process did you realize you were making an LP that was going to be intriguing enough to get this kind of recognition?

I suppose the process of making this record took place in stages. Firstly, I wrote the songs, all the while performing them and developing them both in my studio and on stages. I tend to craft songs like a stand-up comedian crafts a bit, not always, but a lot of work is done on stage. When everything was ready for the studio, Shahzad Ismaily (co-producer) contacted Efrim Menuck and Ben Frost and Mell Dettmer. The songs were recorded in a three day period with Efrim, mixed over a week with Ben and ultimately mastered by Mell. Along the way Laurie Anderson and Shara Worden added their magic and Judges emerged, everything I'd hoped it would be. I was confident throughout this process that we were making a beautiful thing, but I don't think anybody expected this kind of attention for a record of solo saxophone music. At least I didn't!

Which album in the short list would you partner Judges up with and why?

The Suburbs, because of my proximity to it, I think. Sometimes I think we're telling similar stories, just with completely different means, like Judges is The Suburbs' weird shadow, its bizarro. Other times I don't think that at all. 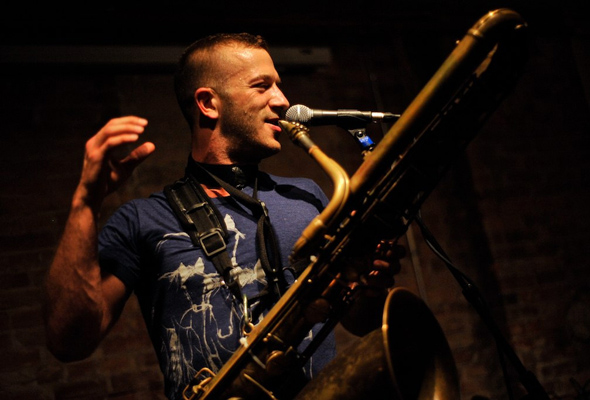 Aside from your own record, which album from the short list did you enjoy listening to the most and why?

Again, Arcade Fire's The Suburbs is a brilliant and beautiful record. It has won just about everything there is to win and has reached millions of people and is deserving of every bit of it. I've listened to it countless times and have never tired of it. It's one of those records that will age very well, I think.

Check Colin Stetson's website for information about his upcoming shows. You can purchase his LP New History Warfare Vol. 2: Judges at Constellation.