Evening Hymns — a project started by lead singer-songwriter Jonas Bonnetta — kindles pastoral landscapes and uninhabited and wild backwoods. Their debut LP Spirit Guides (2009) offers a vision of retreats from the city, loss and letting go. The folk songs come together through beautiful orchestration and sung praises of this rural-spirited world. In our interview, Bonnetta shares some details on their upcoming LP Spectral Dusk, the importance of his father in his song-writing and some travel tips to his hometown of Orono, Ontario.

You borrowed the name of your new LP Spectral Dusk from John Steinbeck's East of Eden. I read Steinbeck's "Art of Fiction" piece in the Paris Review, where he mentions how he never revised until the whole thing was completed. How would you describe your song-writing process?

I really try and sit down and write in one long shot. I'll keep a lot of notes on a topic for awhile and then when I get a chance to write I'll take all those notes and try and piece them together. An image or a line, or some reference point to work from. I'm not great at coming back to something to revisit it. A song like "Dead Deer" was written on a lunch break a few years ago. It came from some imagery I had that I wanted to work with and then I just sat down and wrote it all down. I think I made some adjustments to the bridge and added a line here or there but for the most part it just came together. These songs deal more with feelings/environments than stories so it's important for me to be in the headspace of the song in order to write it. I work best if I can switch into that mode and try and write an entire song, maybe tweaking a few things later.

Good writing also comes from being in a comfortable environment. Can you describe the cabin in Perth, Ontario where you recorded SD? What sorts of things were in that room?

The cabin sits up on a hill, about 20 minutes northwest of Perth. It's a beautiful place. Exposed wood everywhere and the place has many windows that look out into the snowy woods. We warmed the place by woodstove to keep the sound of a furnace off the recordings. We cleared a pond that was hidden back in the woods and in the mornings we'd play hockey while James (Bunton) mixed the previous night's recordings. The record is about my father, my loss, my way of dealing with his passing. We had a real nice old photo of him out for the whole process. On the last night when we cut the final track I grabbed him off the wall and danced him around the kitchen in a victory lap of sorts. We stayed up late dancing that night, watched a huge fire burn off in the distance in the woods, and discovered a camera obscura reflected on the upstairs ceiling. It was a magical night. I also kept out a chess piece, the queen, which was given to me by friends in Trois-RiviÃ¨res that I've carried with me as a talisman. The woodstove can be heard crackling on the recordings too. It's about a feeling and not a collection of songs and I think the Perth cabin plays a big role in the record. It was the perfect place to be. Everyone isolated from the city. Everyone in slippers. Splitting wood to clear the mind. I think that whole recording will stick with us all for a really long time.

And what about the place where you grew up (Orono)? How does the sense of "home" and wanting to or revisiting the past play in your music?

I spent 21 years of my life in Orono and it's hard to distinguish where it is in me now. I think it's in everything to be honest. There's nothing specific about my music that I can attribute to growing up around Orono because I think that it informs my music in a really subtle way. I think it's in everything. I grew up on a big country property and I write about the woods and the water. I long to get back there. It makes a lot more sense to me than city living. Without that childhood I surely wouldn't be writing the music that I write. I'm a lucky guy for having that as my youth.

Spirit Guides hints at a closeness to your father. Does creating music and performing relieve that sense of loss?

It's been my way of working through it. I have to write about it. I don't think I've written about anything else since he passed away in 2009. It's pretty hard on me. Every live show and every recording session is pretty emotional for me but it's also super cathartic. The songs about Dad I'm really proud of and I think that as a complete piece Spectral Dusk is a great picture of our relationship and I feel really good about that but I do want to start moving away from that dark place. Well, not a dark place, but a place that is hard for me to get out from under some days. I think they're hopeful songs but it's still difficult to keep my shit together on stage when I'm playing those songs.

I get chills listening to "Cedars" from Spirit Guides, especially when I hear the lyrics: "With a pocket full of cedar and your hands so soft / And I knew that you were with me." Can you speak a little bit about this song?

That's the first song I wrote after Dad passed away. I don't really want to get into the details about it so much because it's pretty heavy but that song is a pretty accurate description of my father slipping away into the night. After he passed I flew out to Seattle and went down the west coast of the U.S. with my friends in this band called Phosphorescent. It felt like Dad was riding along with me and I wrote that song.

Are Sylvie (Smith) and Tim (Bruton) permanent members of Evening Hymns now? How long have you known them and are there others who perform with you live?

Sylvie is a full-time member. The rest of the cast continues to shift. Tim is going to teacher's college in the fall so music is on hold for him. We just took him to Europe with us last month. For Ontario shows it changes up depending on who's available to come tour but we're hoping to firm up a new line-up for the fall when we start playing shows again and in anticipation of Spectral Dusk's release.

What can listeners expect from SD? And what's next for Evening Hymns after this? 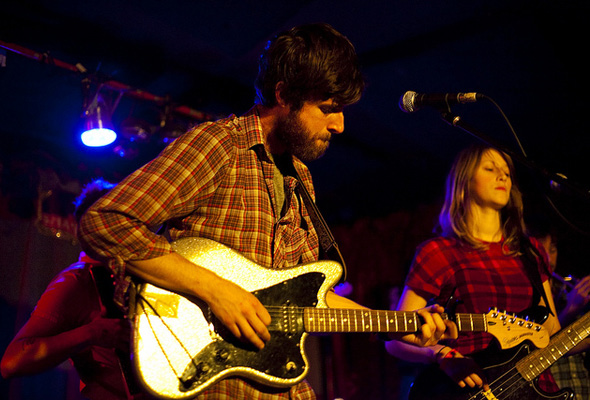 Do you have any advice for first-time visitors of Orono? Is your father's sawmill still there?

There's a nice outdoors area called the "Red Gates" that is at the corner of Station St. and Ochonski Rd. Some really nice hiking back in there. We took the first press photos for Spirit Guides back in there.

Go to the Village Bake Shop and get a hot chocolate with whipped cream and some of their pastries and cookies. I recommend the yellow sunshine cookies. Crumbly but delicious!

And just northwest of town is a little village called Tyrone. There lies the Tyrone Mill which is one of my favourite places on earth. Go during the apple season and ideally on a cool fall day and it's the best. They make these delicious little cinnamon donuts and the place is just amazing. Pies, muffins, cider (although they don't make it there anymore due to stupid Ontario pasteurization laws) and more. They grind their own flour there, and they do a lot of woodwork. I used them a few times to finish up boards for me. They work all their wood from the actual water power of the mill. Plan on spending a couple hours there as the upstairs still houses a fully-functional woodshop that's water-powered. It's impressive. This place is an Ontario hidden gem.

Unfortunately I don't have access to the mill any longer but I still have some wood leftover that I milled and we've got a bunch around the house. A nice reminder of a beautiful time in my life. Hopefully one day I'll get to cut again.

Catch Evening Hymns, along with The Wooden Sky, Jennifer Castle, Great Lake Swimmers and more at the Wolfe Island Music Festival on Saturday, August 6th. Go to the Evening Hymns website for more details on their record releases and shows.