Neil Young takes the stage at Massey Hall (once again)

In 1971, Neil Young sat on stage at Massey Hall, armed only with an acoustic guitar, piano and a selection of harmonicas. He was only 26 years old and already a prolific songwriter with a voice and guitar style completely his own. That night, Young performed a set of 17 songs, many of which were early renditions of what would later become his biggest hits. Songs such as "Tell Me Why," "Helpless," "Down By The River" and "Ohio," were filled with simple melodies, honest (and often heartbreaking) lyrics, and of course, political messages.

Fast-forward 40 years later to May 11, 2011, and Neil Young is once again sitting alone on stage at the legendary Massey Hall, but things are a slightly different this time. His arsenal of songs has expanded into the hundreds, but certain ones are notably timeless and continue to rear their heads all these years later.

Young is an artist who is constantly tinkering with his sound, reinventing songs to reflect his current state of mind and playing style. His latest record, Le Noise, was released in 2010 and showcases this fact. It's a different type of solo album, one where the artist utilizes a uniquely amped electric guitar to pull huge bass lines and melodic sheets of feedback to fill the empty spaces often created by just one man and his instrument. 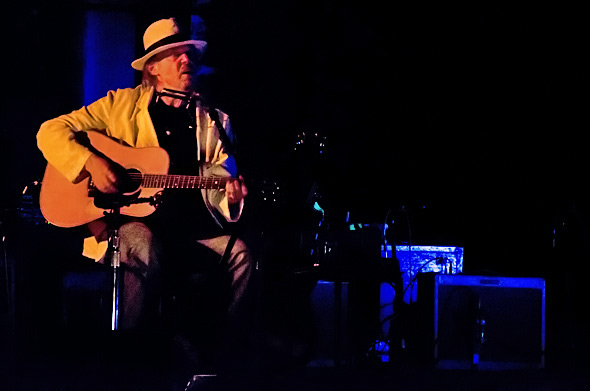 On Wednesday night, Young chose to bring the Le Noise style to his set, re-working gems that were played back in 1971 including "Ohio," "Down By The River" and the classic tale of "Cortez The Killer." The huge bass notes from his guitar filled Massey Hall to the point where it literally sounded like their may have been upwards of five bass players hiding back stage assisting Neil. While the electric tunes kept things interesting, I couldn't help but find them to be slightly sloppy. Not that this is a surprise stylistically from Neil Young, but this electric playing style (which he made famous with his backing band Crazy Horse) just sounds better when his band is around.

That said, when he took to his acoustic guitar to play traditional versions of "Tell Me Why" and "Helpless," he sounded as though he had really never left the Massey Hall stage. When he switched gears mid-set to play keys (he had two pianos and an organ on stage), it was another refreshing change. "Leia" was dedicated to the young ones who weren't allowed to come see the show and the somber lyrics of "After The Goldrush" never sounded more playful as they were placed on top of an organ tone that could have been coming from the speakers of a merry-go-round. 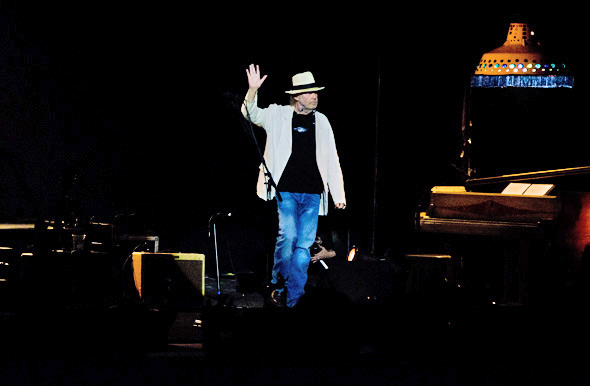 Leaving the stage with guitar feedback still ringing from the unlikely yet appropriate encore of Le Noise's "Walk With Me," I'm sure Young surprised more than a few fans who were probably expecting a more traditional acoustic set. Though some may have found the performance to be a bit self-indulgent, what's really important is that he managed to keep the audience engaged and excited throughout the show â not so much by his banter (of which there was almost none), but rather through his songs, many of which helped shape one of the most important era's of music, and many that continue to define and re-define what rock and roll music can be.